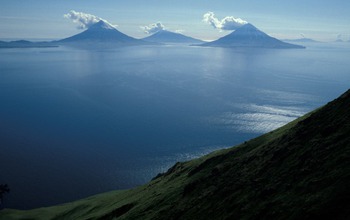 Akutan and Adak. Gareloi and Little Sitkin. Kanaga, Segula and Buldir: Volcanoes on Alaska’s remote Aleutian Island chain. Is all quiet on this western front? Scientists will soon find out.

Many of Alaska’s more than 130 volcanoes are located along the 1,550-mile-long Aleutian Arc. It extends from the Alaska mainland west toward Kamchatka, Russia, and forms the northern part of the tectonically active “ring of fire” girding the Pacific Ocean basin.

To learn more about volcanic hazards in this volatile region, 25 researchers from 11 institutions will study the Aleutian Arc this summer.

The effort is part of the National Science Foundation (NSF)-funded GeoPRISMS (Geodynamic Processes at Rifting and Subducting Margins) program.

GeoPRISMS is designed to investigate the architecture, mechanics and plumbing of continental margins at subduction zones and continental rifts, including what controls geohazards such as earthquakes and volcanoes.

“The research will address volcanic systems–from magma storage to the chemistry and style of eruptions–as well as the earthquake and tsunami hazards that can affect the entire Pacific.”

Late last month, a magnitude 6.9 earthquake rocked parts of the Aleutians; there was no tsunami threat.

Of particular concern: More than 30,000 people each day, and 80,000 large planes each year, fly through the skies over Aleutian volcanoes–mostly on heavily traveled great circle routes to and from North America, Europe and Asia.

By land and by sea

“GeoPRISMS Aleutians combines state-of-the art scientific methods on land and at sea,” says Candace Major, a program director in NSF’s Division of Ocean Sciences, which co-funds GeoPRISMS. “The resulting knowledge can be transferred to regions around the globe that are vulnerable to similar potentially dangerous and costly natural hazards.”

Scientists will use ships to gain access to volcanoes and to the seafloor below. With support from NSF’s Division of Polar Programs, teams will share ship time aboard the Maritime Maid, a research vessel that will travel more than 800 miles along the arc and transport scientists and equipment on and off the islands.

The projects involve offshore and onshore geochemical and seismic studies, as well as explorations of surface deformation and electrical conductivity along the island arc.

Scientists with the U.S. Geological Survey (USGS) and the Alaska Volcano Observatory will participate so they can service observation stations and make complementary observations of these remote volcanoes. In addition, they’re contributing expertise, access, and deployment and sampling assistance.

The mysteries of magma

How does magma form beneath a volcano? Where is it stored? These are among the questions scientists hope to answer after a geophysical survey of Okmok volcano in the eastern Aleutians. Researchers from several institutions have installed an array of seismic and magnetotelluric, or subsurface electrical conductivity, sensors across the volcano.

The earthquake waves and naturally-occurring electromagnetic currents recorded by the array will allow scientists to image the magma plumbing system beneath the volcano, according to University of Wisconsin-Madison researcher Ninfa Bennington, who’s conducting the work with Kerry Key of the Scripps Institution of Oceanography, Paul Bedrosian of the USGS Denver Office and Matt Haney of the Alaska Volcano Observatory.

How does water affect where magma flows?

Scientists have a relatively good understanding of the processes in the upper portions of Earth’s crust that lead to volcanic activity. However, much remains unknown about how these processes are controlled by large-scale tectonics and deep mantle processes.

Diana Roman and Erik Hauri of the Carnegie Institution are working with Terry Plank of Columbia University’s Lamont-Doherty Earth Observatory to learn more about this link.

They’re determining how the amount of water dissolved in magma affects where, and for how long, the magma is stored in Earth’s crust. Identifying the mechanisms that control magma’s water content is critical to accurately forecast volcanic eruptions, the researchers believe. The scientists are working in the Unimak-Cleveland corridor of the eastern Aleutians. Volcanoes there have a range of magma water content, magma storage depths and depths of seismic activity.

Of plutons, lavas and Earth’s crust

Arc magmatism like that in the Aleutian Islands is the most important process that generates the new crust that makes up Earth’s continents, geoscientists have found. Understanding the genesis of plutonic rocks–those that crystallized from slowly-cooling magma–is the key to knowing more about continental crust formation. The Aleutian arc is a unique place to carry out such research because of the extensive exposures of plutonic rocks, perhaps more than any other such island arc on Earth.

How did Earth’s continents form?

Scientists Katherine Kelley of the University of Rhode Island’s Graduate School of Oceanography, Elizabeth Cottrell of the Smithsonian Institution and Matt Jackson of UC Santa Barbara are poised to find out. Their expedition will take them to a no-man’s-land in the far west of the Aleutians: the islands of Buldir, Kiska, Segula, Little Sitkin, Gareloi and Kanaga.

The researchers are seeking clues to the origins of continents by looking at so-called volatile elements such as water and oxygen in the lavas of volcanoes in this distant part of the Aleutian chain.

A team led by Jeff Freymueller of UAF will also be working in the Aleutians region. The scientists will use GPS to better understand what controls variations in seismic activity along the margin where tectonic plates converge.