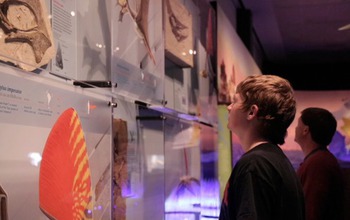 Award-winning museums look to the future

Even more impressive, however, may be the way these museums extend their reach beyond those iconic buildings, into classrooms, curricula and the lives of students.

Both museums were honored with a 2015 Public Service Award from the National Science Board. The award recognizes individuals and groups that have made substantial contributions to increasing public understanding of science and engineering in the U.S.

Boston’s Museum of Science was recognized for its National Center for Technological Literacy (NCTL), which promotes a better understanding of technology and engineering. NCTL developed America’s largest elementary engineering curriculum, which integrates engineering into language, math, social studies and more. More than 77,000 teachers and 7.7 million students from across the U.S. have used the curriculum.

AMNH was recognized for its exhibitions–which draw on AMNH’s 33 million specimens and artifacts–and its pioneering educational programs. These include a first-of-its-kind Master of Arts in Teaching and Urban Advantage program, which pairs middle schools with AMNH, and other urban science institutions, to improve student learning.

Listen to AMNH President Ellen V. Futter and Ioannis Miaoulis, president and director of the Museum of Science, talk about what this award means for their institutions, and the power of museums to educate and inspire. In the video, you’ll see footage of classic AMNH exhibitions–including the T-rex skeleton, Great Canoe and Pterosaurs–as well as education programs from both museums.