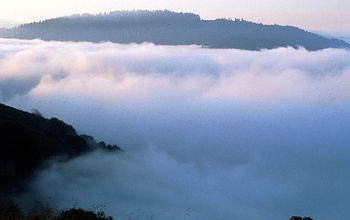 Ultimately makes its way into ecosystems along shore

What do the roof of a building in a West Coast redwood forest, a bluff in California chaparra, and a research vessel in Monterey Bay have in common?

They’re often draped in tendrils of fog. That makes them prime sites for collecting fog water samples. And there’s something else that can be found at those sites: mercury, according to atmospheric chemist Peter Weiss-Penzias of the University of California, Santa Cruz (UCSC).

Mercury: rolling in with fog

Their research is funded by the National Science Foundation’s (NSF) Chemical Oceanography Program in its Division of Ocean Sciences.

“‘Fog drip’ could deliver unsafe levels of monomethyl mercury to upland and near-shore ecosystems along the Pacific Coast,” Weiss-Penzias says.

Other scientists had previously found high levels of mercury in Monterey Bay during coastal upwelling events–occasions when winds drive surface water offshore and colder water from the deep moves in to replace it. That gave Weiss-Penzias and colleagues the idea to find out whether mercury was somehow stealing ashore in fog.

Mercury is a heavy metal neurotoxin that bioaccumulates and bioconcentrates–primarily as monomethyl mercury–in aquatic food webs. It often reaches high levels in fish and other animals, making them unsafe for human consumption.

The source of monomethyl mercury in aquatic organisms has been debated, says Weiss, “but atmospheric deposition has been implicated as a pathway. Emissions such as coal combustion likely make a significant contribution.”

That deposition affects all forms of precipitation: rain, snow and fog.

Weiss-Penzias and other researchers started their search by collecting fog samples by dark of night from June through August 2011.

They worked only in blackness so there would be no decomposition of mercury from sunlight, moving a single fog water collector among four locations near Santa Cruz: the roof of a UCSC building located in a redwood forest; a bluff at UCSC’s Long Marine Laboratory; the Moss Landing Marine Lab’s research vessel John H. Martin in Moss Landing Harbor; and an offshore spot in Monterey Bay where the John H. Martin was temporarily moored.

FogNet: a dragnet for mercury

The scientists then expanded their goals. Their NSF-funded project, called FogNet, involves sampling fog from seven locations along the California coast, from Eureka to Monterey.

The project will collect fog water during the summers of 2014 through 2016 for chemical characterization and quantification of fog deposition volume, Weiss-Penzias says.

The new data show elevated monomethyl mercury concentration, similar to those the team revealed at the December AGU conference, as well as in a paper published in 2012 in the AGU journal Geophysical Research Letters.

“The hypothesis we’re now testing,” Weiss-Penzias says, “is whether a form of mercury called dimethyl mercury produced in the coastal ocean can be incorporated into cloud droplets, then be deposited in ecosystems on land and become an important, or even dominant, contributor to monomethyl mercury there.”

Hidden in the mist

“There haven’t been reports of monomethyl mercury measurements in fog water in the scientific literature,” says Weiss-Penzias. “But these elevated concentrations suggest that fog could be a significant source in coastal environments.”

Could fog be a vector for not only mercury, but other toxic elements?

“We really don’t know,” says Weiss-Penzias. “The potentially far-reaching consequences of these results, however, underscore the need to collect fog water in various locations along the coast.”

Weiss-Penzias has teamed with UCSC biologist Chris Wilmers for one of the next steps in the research. Wilmers is providing hair and whisker samples from mountain lions that roam the often foggy Santa Cruz Mountains and Sierra Nevada foothills, where mercury was used in the Gold Rush era due to its ability to extract the precious metal from other materials.

Early results show that whiskers from coastal mountain lions contain mercury levels that are, on average, 10 times higher than those of their inland counterparts.

“We’re looking at whether the mercury is linked with plants eaten by the mountain lions’ main prey–deer,” says Weiss-Penzias.

The scientist says he’s constantly looking for mercury. When he walks down his driveway to pick up the morning paper, he wonders what’s in the dew.

“If my feet are wet when I get back in,” he says, “I’m thinking: ‘It was foggy enough last night to get a good sample.'”

#1333738 Collaborative Research: Investigations on the Cycling of Mercury from the Ocean to Fog and Deposition to Land in Coastal California