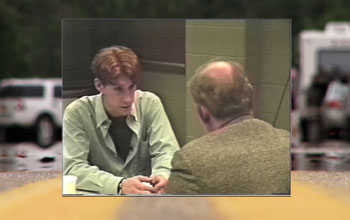 The camera angle of an interrogation video can actually influence viewers, research finds

What if it were possible to present a video of a police interrogation in a way that would influence a jury to believe a suspect’s confession is voluntary, even if there’s evidence that suspect was threatened or coerced? Actually, it’s very possible–and it comes down to something as simple as the camera angle.

Research by Ohio University psychology professor G. Daniel Lassiter, supported by the National Science Foundation’s (NSF) Social, Behavioral and Economic Sciences Directorate, shows that camera placement can play a significant role in creating bias among viewers about how willing a suspect is when making self-incriminating statements.

Lassiter told NSF that when the camera is focused squarely on a suspect–the interrogator either is nowhere in sight or only his back is visible–viewers are more likely to believe that any self-incriminating statement is voluntary. That perception persists even if the interrogator seems to be coercing the suspect.

But take the simple step of moving the camera–positioning it so that both the interrogator and suspect can be seen in profile–and the exact same interview can leave viewers with a much different impression. That bias toward believing that the suspect is making statements willingly is gone.

The research has big implications for criminal justice, Lassiter says. Biased viewing of interrogation videos and false confessions made under coercion can lead to wrongful convictions. According to numbers from the Innocence Project cited by Lassiter, one in every four people convicted, but later exonerated by DNA evidence, made a false confession or incriminating statement. Wrongful convictions aren’t just bad for defendants–they mean that the guilty parties are still free and could still be dangerous to society.

Lassiter has worked with prosecutors and state agencies to turn his research into best practices that can help the justice system. Among them: Record interrogations in their entirety, position cameras so they focus equally on interrogator and suspect, and when the only available interrogation videos focus on suspects, present audio or transcripts to fact-finders at trial instead.