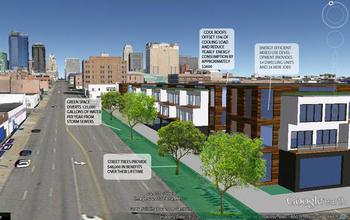 According to a study by the nonprofit Environmental and Energy Study Institute, the commercial and residential building sector accounts for 39 percent of carbon dioxide (CO2) emissions in the United States per year, more than any other sector, including transportation and industry.

These emissions come mainly from the combustion of fossil fuels to provide heating, cooling and lighting for homes and offices, and to power appliances and electrical equipment.

“By transforming the built environment to be more energy-efficient and climate-friendly,” the report states, “the building sector can play a major role in reducing the threat of climate change.”

Planners, architects and municipalities are actively pushing for energy-efficiency in design, but the tools needed to predict the impacts of new buildings in advance are limited in their function and often are prohibitively expensive to access.

PlanIT Impact, a company based in Kansas City, Missouri, is working to fix this problem and is in the process of helping to build smart connected communities able to serve citizens better.

The idea is to give designers a clearer picture of the resources their project will use–things like storm-water impact, water and energy usage, and greenhouse gas emissions–while they are in the design phase.

“Currently this is a time-consuming, expensive process, and our goal is to make it as affordable and accessible as possible,” she said.

The project was born out of a Kansas City hackathon in 2013 and was one of 22 winning projects in the open innovation challenge called “Mozilla Ignite.”

Funded by the National Science Foundation (NSF) and Mozilla as part of the US Ignite Initiative, the “Mozilla Ignite” competition supported apps that could leverage ultra-fast, programmable networks to advance national priorities such as health care, energy, transportation, and education in creative and innovative ways.

PlanIT Impact was later selected as one of 10 projects to receive funding from NSF’s Gigabit Community Fund, which piloted gigabit-enabled applications and associated curricula in Kansas City and Chattanooga.

With this funding in hand, the PlanIT team created a web-based design tool that provides resource impact reports via immersive, 3-D-rendered visualizations. In doing so, they hope to improve the design and planning process by bringing valuable impact insights into the earliest stages of design and, ultimately, to reduce the negative impacts that homes, offices and municipal buildings have on the environment.

PlanIT Impact uses several different open data sources–such as census data, drive times, transit scores and rainfall information–to arrive at its assessments, and it integrates these with 3-D models that designers import into the site.

Synthesizing all of this data, the tool generates accurate building and site performance projections to help predict a building’s ecological impact and performance.

“It gives you an early estimation of how your design will perform when it comes to life,” said Chris Morris, lead developer for PlanIT Impact.

Like many of the Gigabit Community Fund-supported projects, PlanIT Impact leverages the gigabit Internet speeds provided by NSF-supported Global Environment for Network Innovations (GENI), a virtual laboratory for networking and distributed systems research and education that is roughly 30 times faster than typical commercial offerings.

According to Morris, GENI’s high-speed networking capabilities are vital to PlanIT’s real-time performance.

“Instead of having the client upload their file, then kick back the results after a minute or two, we’re able to reach out and get all of this data right away, run our calculations and instantly get the information back to the end user,” Morris said.

PlanIT Impact has its own proprietary score–an aggregate view of how environmentally and economically impactful a design is going to be. Individuals can compare one design to another to get the greenest structure possible.

“The goal is to give you the ability to see your design as it is emerging and make it better,” Morris said. “By eliminating wasted time from designing, redesigning and modifying late in the design process, and by getting the best score and the best design upfront, we’re better able to streamline the design process and produce designs that reduce the negative impacts our buildings have on the environment.”

In March, PlanIT Impact demonstrated its tool at the Beyond Today’s Internet Summit in Washington, D.C. In June, the team participated in the first Global City Teams Challenge Expo, where experts presented visions of future Smart City and Internet of Things technologies. The team tested the tool using Kansas City’s 19th and Grand Street corridor–historically Kansas City’s densest block–as a case study. The corridor is now a surface parking lot.

The PlanIT Impact tool will be launched publicly in the first quarter of 2016.

“PlanIT Impact shows how high-speed networks and agile app development can work together to spur the development of tools,” said William Wallace, U.S. Ignite executive director. “And that can have a major impact on our built environments.”