10 things to know about thunderstorms that strike at night 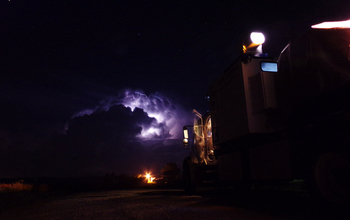 For the latest information, NSF talks with three atmospheric scientists

Thunderstorms that strike by night are a mysterious phenomenon. Scientists are burning the midnight oil this summer in search of some answers.

What they find as part of the project–called Plains Elevated Convection at Night (PECAN)–may ultimately help improve forecasts of these sometimes damaging storms.

To learn more, the National Science Foundation (NSF), which supports PECAN, spoke with Roger Wakimoto, the NSF assistant director for Geosciences, Ed Bensman, program director in NSF’s Division of Atmospheric and Geospace Sciences; and Howie Bluestein of the University of Oklahoma, a principal investigator in PECAN. All are atmospheric scientists. (See accompanying video for more from Bensman.)

1. Why is there interest in nocturnal thunderstorms?

Wakimoto: Anyone who has been stirred out of bed in the middle of the night after hearing thunder knows that intense storms occur frequently after the sun sets. Indeed, a substantial fraction of the total precipitation in severe weather events can be attributed to these evening events.

2. In what parts of the U. S. and during what time of the year do thunderstorms most often occur during the night rather than during the day?

Bluestein: In the plains of the U.S. during June and July, thunderstorms most often form during the night around midnight when most people are sleeping and it is much cooler than during the day. The loud thunder can jolt you out of bed! On the other hand, in the Rocky Mountain region, in the coastal areas of the Gulf of Mexico and most elsewhere, thunderstorms over land form more often during the warmest time of day–the “heat of the day,” from mid-day to late in the afternoon.

3. What role does geography play in nocturnal thunderstorms?

Bluestein: It appears as if the Rocky Mountains and the gentle slope of the land downward to the east and southeast toward the Gulf of Mexico are important. The sun heats the land unevenly during the day, and when the heating from the sun stops at night, changes occur in the atmosphere that force a strong “jet” of air just above the ground. It blows northward from the Gulf of Mexico, bringing lots of moisture that can fuel thunderstorms in the Plains.

4. Is it more difficult to forecast thunderstorms that form at night?

Bluestein: All thunderstorms produce dangerous lightning, both during the day and at night. Storms that form at night are likely to produce hail, damaging winds and flooding rain. Tornadoes, however, are much more likely during the day, especially during the late afternoon and early evening, not at night. Tornadoes are also much more common in the spring than in the summer in most parts of the country.

6. How can PECAN help us understand nocturnal thunderstorms?

Bluestein: During PECAN, scientists and students are using a large group of instruments to take measurements in the atmosphere before and during nocturnal thunderstorms. Some instruments are being driven to areas in the Plains where storms are expected to form, and others are flown to these areas on aircraft. Analyses of the vast amounts of data collected, and the use of state-of-the-art computer models, will shed light on how nocturnal storms form.

7. What instruments are needed to study nocturnal thunderstorms?

Bluestein: The instruments include sophisticated Doppler radars, lasers and devices that measure radiation, which can tell us what the temperature and humidity are. Other more conventional instruments such as thermometers and anemometers are mounted on the roofs of cars. Weather balloons are also being launched from mobile platforms.

8. What are the main weather hazards from nocturnal thunderstorms?

Bluestein: Nocturnal thunderstorms that occur in large complexes or lines are capable of producing damaging winds, hail and torrential rainfall that can result in flash flooding. Tornadoes, however, while possible, occur much less frequently at night. Lightning is also a significant hazard.

9. What should people do to prepare for nocturnal thunderstorms?

Bluestein: Be sure to secure all outdoor patio furniture and other things that can be blown around by strong winds. Park cars in garages or under shelters if possible to protect them from hail or falling tree branches. Make sure electronic devices such as computers and televisions that are plugged into the wall are protected from electrical surges or are simply disconnected. If you live in a flood-prone area, be prepared to evacuate if a flash flood warning is issued. A NOAA weather radio with an alarm tone and a cellphone with alarm capability are useful for being awakened and warned while you are asleep.

Wakimoto: Computer simulations, which are viewed every evening on news channels, have significantly improved our ability to forecast thunderstorms. And new knowledge will be used to improve these simulations. However, there is still much to be learned about how thunderstorms initiate and evolve at night.

#1237404 The Mechanisms for the Maintenance of Nocturnal Convective Systems