As a Southern community changes, an accent fades 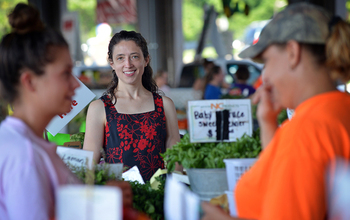 Southern accents are declining in North Carolina. What does that tell us about social dynamics?

For more than half a century, the familiar Southern drawl has been fading in Raleigh, N.C. Its disappearance has been so slow and so subtle that locals may not even have noticed. But for Robin Dodsworth, an associate professor in sociolinguistics at North Carolina (NC) State University, the decline tells the story of rapid social change across the urban South.

Sociolinguists study the ways society shapes language–how ethnicity, gender, education, socioeconomic class and many other factors affect how we speak. Everything from the words we choose to the way we pronounce our vowels is influenced by a complex web of social interactions, experiences and expectations. By analyzing speech, sociolinguists can begin to untangle that web of social dynamics.

Starting in 2008, Dodsworth and other researchers at NC State conducted and analyzed hundreds of hour-long sociolinguistic interviews with people who grew up in Raleigh. In 2013, the National Science Foundation’s (NSF) Social, Behavioral and Economic Sciences Directorate awarded Dodsworth a three-year grant to continue the project. The researchers soon built up a rich store of quantitative data about the rise and fall of linguistic features in the Raleigh area.

By comparing properties of those recordings using acoustic analysis software, Dodsworth could precisely measure just how “Southern” a speaker’s vowels were. She then tracked the prevalence of certain linguistic features–for example, the pronunciation of “kid” as “kee-yid”–among Raleigh natives who were born in different decades.

Dodsworth discovered that the vowels of speakers born between 1920 and 1950 were remarkably stable. But then in the middle of the 20th century, Southern linguistic features began to steadily decline.

“With people born after 1950, there’s almost a linear, lockstep change going on with these different sounds, such that folks in the present start to sound like me,” says Dodsworth, who grew up in Ohio. “It’s not as though, all of a sudden, everyone said, ‘Let’s lose this Southern dialect.’ So what social mechanism caused this to happen? What is the interface between language and society?”

The answer, in Raleigh’s case, was the city’s emergence as a technology hub in the 1960s. One of the largest high-tech research and development centers in the country, the Research Triangle Park (RTP), was built between the cities of Raleigh, Durham and Chapel Hill, and its creation heralded a decline in the region’s traditional Southern dialect.

“It’s no secret to anyone in this area that RTP was constructed in 1959,” Dodsworth says. “And then IBM came in the early ’60s. If you’re born in 1950, you’re in junior high right about the time when those white-collar workers are coming down from Northern places to work.”

That sudden influx of workers–and their children–sparked what Dodsworth calls a “dialect contact situation” in Raleigh and its neighboring cities.

Children who attended school in the 1960s and 1970s grew up speaking with less of a Southern accent than their parents, in large part because they spent their days talking with many more Northerners.

“One thing we know in sociolinguistics is that your accent largely depends on your peers,” Dodsworth confirms. “It doesn’t matter as much how your parents speak, or who you heard on NPR. Who is it that you’re seeing every single day and having to get along with? That’s the people at school.”

Through her analysis of K-12 networks in Raleigh, Dodsworth found correlations between the increasing social diversity of the city and the slow “leveling” of its traditional accents. It also helped to explain why rural areas–or even the parts of Raleigh that saw the least inward migration–remain the most Southern sounding.

“Linguistic changes often jump from city to city at first and leave the rural spaces in between untouched for some time,” says Dodsworth. “Part of that is that rural areas have a less concentrated population, so it’s harder for change to spread.”

Those rural areas are often the focus of other research undertaken by NC State’s linguistics program. Walt Wolfram, William C. Friday distinguished professor of English at the university and co-author of the book “Talkin’ Tar Heel,” has spearheaded the NSF-funded Language and Life Project, which produces documentary films showcasing linguistic diversity in North Carolina–from Appalachian “mountain talk” to the “Core Sounders” of the Atlantic coast. The project enables the university’s linguists to help preserve language differences and share them with the public.

Wolfram’s research and extension has been supported by NSF funding for more than 20 consecutive years. His forthcoming film, “Talking Black in America,” explores the diversity of language among African Americans and African diaspora communities, shedding light on the variety of English that most often endures negative stereotyping and discrimination.

Dodsworth and her graduate students, meanwhile, have been involved in the preservation and study of oral histories concerning Chavis Park in southeast Raleigh, a site of deep social significance for the historically black community it serves.

“Language is part of the Southern tradition and culture, and across North Carolina you have all these pockets of linguistic diversity,” says Dodsworth. “These projects are an effort to make our research relevant to people who are proud of their heritage–or insecure about their heritage. We want to help people recognize the cultural value of how they speak.”