Innovations from the wild world of optics and photonics 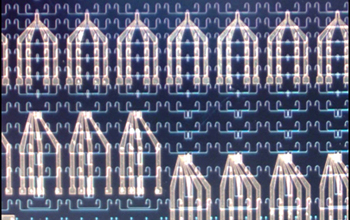 Traditional computers manipulate electrons to turn our keystrokes and Google searches into meaningful actions. But as components of the computer processor shrink to only a few atoms across, those same electrons become unpredictable and the ability to shuttle them across long and short distances diminishes.

With support from the National Science Foundation (NSF), the Lightwave Communications Laboratory at Princeton University, led by Paul Prucnal, seeks to understand, build and design the next generation of communication systems that process information far faster than today’s devices using photonics, or the manipulation of light.

The field of photonics began, roughly, with the invention of the laser in the late 1950s and found widespread applications in the 1990s with the explosive growth of the Internet.

Photonics not only made high-speed long-distance data transmission via fiberoptic cables feasible and affordable, it has also enabled advances in laser manufacturing, chemical sensing, medical diagnostics, display technologies and many other fields.

But scientists are betting that not all of light’s secret abilities have been discovered yet.

In his lab at Princeton, Prucnal and his team have been experimenting with a variety of optics and photonics-based applications, creating systems to carry hidden messages, detect malicious cyberattacks and improve the quality and capacity of wireless communications using light.

They are even exploring whether it may be possible to create a network of photonic “neurons” to perform functions our brain does well–like pattern recognition–but significantly faster. Through partnership with industry, their innovations are moving quickly from the lab to the factory.

Coping with billions of devices

Currently, there are more mobile communication devices than humans on the planet, and this proliferation is expected to continue. However, the radio bandwidth on which wireless communications depend is a limited resource.

As more and more devices compete for bandwidth, we can expect more bottlenecks and more interference from nearby competing antennas, said Matthew Chang, a Ph.D. student in Prucnal’s lab. To handle the constant growth in demand for capacity and bandwidth, optical solutions are needed.

“With a frequency 1 million times bigger than radio waves, optics sees the entire current radio-wave spectrum as practically a single frequency,” Chang said. “In terms of its ability to provide the bandwidth for a growing army of mobile phones, we say it’s future proof.”

In the near term, the lab is working on technologies that harness optical signal processing to improve the efficiency of the cell towers and mobile antennas already in place.

One such technology the lab developed is called photonic beamforming. It involves encoding wireless signals on light waves to allow antennas to selectively detect signals from a desired spatial direction, operating with precision and over bandwidths that exceed what is possible with electronics.

The phenomenon is akin to “the cocktail party effect,” where one is able to tune in to the frequency and direction of a friend’s voice in a crowded room.

The human brain is adept at de-noising signals, Chang explained. “We know what direction the voice is coming from and can train our ears to sense in that direction.”

We also know what a friend’s voice sounds like and can even read lips if we need to, he said. Radio antennas can’t do that.

“We want to design processors that give radio antennas the ability to sense a signal, lock on its spatial direction and follow it to the source,” Chang said.

The technology that the team developed utilizes an array of antennas coupled to an adaptive processor to filter signals in both space and frequency. The technology allows the processor to steer the beam of radio waves while rejecting interfering directional noise sources.

Their techniques can even apply algorithms that let the antenna system adapt to rapidly changing environments in order to track fast moving targets or rapidly switch between a wide-angle search and detailed inspection.

Not surprisingly, many of the group’s technologies are currently of interest to the military. However, they imagine that one day every cellphone will contain a beamforming chip to better manage wireless inputs and outputs, the way many of today’s phones contain a small component to switch between different wireless channels.

Working with partners L3 Telemetry East and Bascom Hunter Technologies, which Prucnal helped found, the researchers are transferring the beamforming technology from the laboratory to the marketplace.

Bascom Hunter received Phase 1 Small Business Innovation Research (SBIR) support from NSF in 2013 and 2015 to adapt their technologies for public safety radio networks and to improve the intermediate links between the core networks. They hope to see the technology improving the performance of cellphone towers and military applications within one or two years.

More importantly, as data rates climb exponentially, the group sees optics and photonics as a way to provide gigabit or faster Internet to everyone, without the use of optical fiber.

“The current processing of radio signals is akin to trying to sense and map the changing surface of the ocean by slowly sucking water through a single straw,” said Prucnal. “Photonic processing makes it possible to process radio signals with greater precision and parallelism, and with greater speed, than electronics.”

If light-encoded Wi-Fi signals sounds far-out, another of the projects in Prucnal’s lab is truly at the distant frontiers of research: the photonic neuron.

The project came out of conversations between Prucnal and David Rosenbluth, a neuroscientist at Lockheed Martin, with which the lab collaborates. Prucnal noticed that the differential equations that describe the behavior of neurons have the same forms as the equations for lasers.

Furthermore, in biological neurons, each has an internal voltage. If that voltage reaches a certain point, the neuron emits a spike, signaling the neurons to which it is connected.

Likewise, a laser gets pumped with current, exciting more electrons from one state to another. At a certain point, the laser reaches its threshold and outputs an optical spike.

The dynamics, they noted, were astonishingly similar, but lasers have the potential to perform the same action a billion times faster than the chemical signaling in the brain.

This led the researchers to wonder if it was possible to design a synthetic system made of optical and photonic materials that could perform some of the functions of a physiological neuron.

After developing a single photonic neuron in 2009, the research team has been working to build sophisticated, ultrafast signal processing circuits that mimic the visual, auditory and motor functions found in biological organisms.

Their initial implementation was inspired by the crayfish tailflip response–a natural wonder of high-speed sensing.

Crayfish have a neuronal circuit in their brain that is networked in such a way that if it senses danger, a specific set of neurons fire simultaneously, causing the creature to flip its tail to swim away with amazing speed.

With this biological model in mind, Prucnal and his team designed a system that uses several excitable lasers, pre-loaded in such a way that if a particular signal comes in, the lasers recognize the specific pattern and fire a spike together.

In the future, the researchers say such a device could be capable of making nearly instantaneous calculations in life-or-death situations, such as deciding whether to eject a fighter pilot from a jet.

“When thousands of photonic neurons are networked together and working in unison, we believe we can build a processor that can sense patterns and cues with an almost human-like quality, but a billion times faster,” said Bhavin Shastri, a postdoctoral fellow at Princeton working on the project.

For example, the team imagines being able to peer into all the wireless signals around you, lock onto one of interest and take action on it–all in an instant as the signal zooms across your antenna.

The lab’s research was featured on the cover of the IEEE Photonics Society Newsletter in June 2014; and in November 2014, the group published an article in IEEE’s Journal of Lightwave Technology describing how to scale the signal-processing platform to large numbers of neurons.

By finding new ways to encode and process light and by applying these methods to existing and brand new applications, Prucnal’s group is helping to solve the looming bandwidth shortage while imagining entirely new capabilities for photonic systems.

“With all the information that can be obtained using photonic processing of the radio image, we could track signals coming from all directions and all frequencies, separating multiple signals of interest from multiple interferers, quickly finding holes in the radio spectrum available for transmission and mapping out spatial features of the radio environment in real-time,” Prucnal said. “This vision is not only exciting, but will be necessary as the use of wireless communications proliferates in the future.”

Networking Technology and System
Enhancing Access to the Radio Spectrum