What happens when ‘Aha!’ strikes 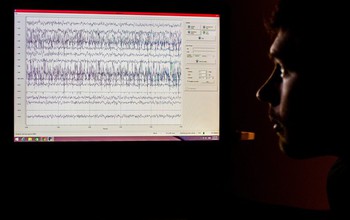 Insight–you know the feeling. It’s that amazing idea, the solution that hits you like a bolt of lightning. It can come to you while you’re mulling over a problem, or days later, when you’re making a sandwich or mowing the lawn. And John Kounios has seen what your brain is doing when it has that “aha moment.”

With support from the National Science Foundation’s (NSF) Social, Behavioral and Economic Sciences Directorate, the Creativity Research Lab that Kounios heads at Drexel University uses electroencephalography (EEG) and other technology to record brain activity. The lab has been looking for something very specific: What goes on in the brain when a flash of insight hits.

What Kounios has found has overturned some long-held beliefs in cognitive science about how quickly the brain can snap from a state of not knowing something to knowing it completely. He’s also made discoveries that shed light on exactly how ideas emerge–including how your brain briefly blocks out visual information to focus on finding an answer to a tough question.

And his work could yield benefits that extend past the academic realm. In the book that he and his research collaborator, Northwestern University psychology professor Mark Beeman, published earlier this year, “The Eureka Factor: Aha Moments, Creative Insight and the Brain,” Kounios notes that moments of insight have resulted in major economic benefits. For example, inventors including Clarence Birdseye, who came up with a method for flash-freezing food, and Philo Farnsworth, the father of television, turned bursts of outside-the-box thinking into entire industries. Understanding how creative insight happens in the brain can lead to strategies for generating breakthrough innovations, he says.

Kounios discussed his work–and where it might be headed in the future–with NSF:

Q. What drew you to study insight?

A. Back in graduate school, I researched cognitive processes that changed suddenly versus gradually. Back in the 1980s, the view seemed to be that mental states changed only gradually–you don’t snap from one state to another. Rather, these states flow continuously and overlap with each other in time. The cognitive science community seemed to assume that there were no exceptions to this view. What I thought at the time was that there didn’t seem to be any evidence that this was always the case. A few years later my first graduate student, Roderick Smith, and I started looking for an extreme case of sudden-state changes. We figured that if there were a case of one mental state snapping to another, it would be insight, the “aha” moment.

In behavioral studies that we did in the 1990s, we found that was the case for insight. You go from a state of having no idea what a problem’s solution is to a state of knowing exactly what the answer is with high certainty. There’s nothing in between. Insight during problem-solving was the only type of cognitive task that we could find in which that was the case.

Later, around the year 2000, I met Mark Beeman–we were both at the University of Pennsylvania at the time. He did functional magnetic resonance imaging (fMRI) research and I was using high-density EEG. We decided to team up and do the first neuroimaging study that was able to isolate and study insight.

Q. Most people have heard the term “insight” and have some understanding of it, but what’s the scientific definition?

Q. So it really is that distinct a shift.

Q. How does that work? Is your brain working things out even before you know the answer?

A. Yes. Before you have a conscious awareness of what the solution is, there is unconscious processing leading up to the eventual realization. And an insight doesn’t have to be related to a particular problem that you were thinking about. In real life, people have spontaneous insights all the time that have nothing to do with any problem that you’ve been working on. You could be walking down the street and all of a sudden an idea pops into your head that solves a problem that you didn’t even know you had. In that case, your brain may have been unconsciously processing ideas–for seconds, or for years. This is called incubation.

In insight problem-solving, the work of solving goes on unconsciously and the final product gets dumped into the consciousness. Even if you’re not aware of it, your brain chugs along and can come up with that solution.

Q. How do you monitor a person for insight?

A. We recorded people’s brain activity with EEG and fMRI while they solved little verbal puzzles. For each one that they were able to solve, we asked them whether the solution had just popped into their awareness or whether they had worked it out in a deliberate, conscious way. Afterwards, we went back and sorted the EEG recordings into two groups–those that involved a flash of insight and those that were solved more methodically. Then we separately analyzed the neuroimaging data corresponding to these two types of solutions. The most striking finding was that when participants had a flash of insight, there was a burst of high-frequency EEG activity in the right temporal lobe.

Q. What’s happening in that area of the brain?

A. We believe that’s the solution popping into awareness. The timing of that flash is just about when they reach the solution. The specific area where this is happening, the right anterior superior temporal gyrus, connects to other areas of the brain. People who have damage in that area, due to strokes or other reasons, have trouble connecting disparate ideas to understand jokes or metaphors. Getting a joke often involves a sudden insight. A joke often leads you down a path, and then you get to the punchline and it goes somewhere else–that’s what makes it funny.

There was another key finding. A few hundred milliseconds before that flash was a burst of a different kind of activity in the back of the brain–a burst of EEG alpha waves. Those are lower-frequency waves. Alpha waves have been studied for about 80 years, and what we know about them is that they’re a measure of inhibition of the visual system. They are the opposite of neural activity–when alpha is high, neural activity is low.

What we found is that just before an insight, a person’s visual system is inhibited for a few hundred milliseconds. Think about it this way: when you ask people a difficult question, to concentrate on it, they often look away. They may look down at their feet or up at the sky, or even close their eyes to think, to focus. The brain does the exact same thing. When you present a difficult question, the solution may already be activated at an unconscious level. But there is a lot of distracting noise, so you can’t easily retrieve it into awareness. The brain briefly blocks out visual information. That boosts the signal of the solution, allowing it to pop into awareness.

Q. What is your latest NSF-supported work showing?

A. My current NSF-supported project examines differences among people in the extent to which they use insight or a deliberate analytical strategy to solve problems. This work shows that these differences are pervasive. We compared the EEG activity of people who tend to be more insightful to those who tend to be more analytical and found that the brain activity of these two groups of people is different even when they are in a resting state with no task to perform.

Yes. We’ve explained the practical implications and strategies at length in non-technical language in our book “The Eureka Factor.” Because insights are generated by unconscious processes that eventually deposit their results into awareness, conscious thought strategies are not a very effective way to enhance insight.

Insights are more likely to occur when a person’s brain is in a particular state. This state is characterized by a positive mood and expansive, de-focused attention. In this state, there is more activity in a part of the brain called the anterior cingulate, which monitors other brain areas for conflicting ideas or tendencies. When the anterior cingulate is activated, then it can detect a weak, unconscious, alternative idea and signal other brain areas to switch attention to it, resulting in a sudden insight. But when the anterior cingulate is less active, then alternative ideas aren’t detected and a person’s scope of thought is limited to the most obvious, straightforward idea. This is like mental tunnel vision.

Research by us and by others shows that, in addition to a positive mood, there are ways to manipulate the environment to encourage the kind of expansive, de-focused attention that promotes insight. For example, large rooms with high ceilings allow visual attention to broaden. This effect is magnified further in the great outdoors. This, in turn, broadens conceptual attention to expand a person’s scope of thought to include a wide variety of ideas and associations that can form the basis for an insight. In contrast, striking objects tend to grab and focus attention, thereby promoting analytical thought at the expense of creative insight. We discuss many other tools and strategies in detail in the book.

Q. You’ve gotten interesting results so far. You’re working in an area with some clear societal importance, given the economic activity that can result from sudden insights, as we’ve seen before with inventors like Birdseye and Farnsworth. Where do you go next with this?

A. We’re hoping to take this more into the real world. You might have great insights but be ineffective at turning them into tangible creative achievements. To do that, you need not only the insights but also the analytical skills to refine, test, develop and implement your ideas. Without both insight and analytical thought, you won’t have a real-world product. We plan to look at how insightful and analytical thought combine to yield creative accomplishments.

Another project involves examining the emotional effects of insights. When you have an “aha” moment, there is a subjective emotional rush, which is probably why people like to solve puzzles, read murder mysteries and do research. There is extensive neuroscience research on what are called reward signals in the brain, such as occur when you gamble and win. Two of my doctoral students–Brian Erickson and Monica Truelove-Hill–and I have started to analyze our EEG recordings to look for such a reward signal, and the preliminary results are very promising.

What’s really interesting about this, if it pans out, is that reward signals aren’t limited to pleasurable outcomes of thought or behavior. It seems to be the case that particular ways of thinking are more pleasurable than other ways of thinking, even when the outcome–the solution to the problem–is the same. We’re very excited about this new line of research.