Morticulture: Forests of the living dead 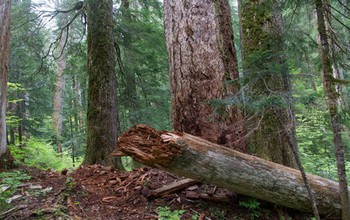 Which is more alive: a live tree or a dead one? The answer might surprise you.

In a live tree, only a thin layer of wood and bark grow and transport water and nutrients from roots to leaves. A dead tree teems with life: insects, fungi, bacteria and other organisms. Many downed trees have verdant carpets of plants draped across their surfaces.

Dead trees take a long time to disappear, allowing new life to spring up within them. Biologist Mark Harmon of Oregon State University (OSU), also known as “Dr. Death” for his scientific interest in forest mortality, is taking part in a 200-year-long study to monitor the decomposition of trees.

It may seem like a long science project, but it reflects the pace at which change happens in logs.

“Life inside a decaying log is a microscopic forest within a forest, teeming with miniature life,” says Matt Kane of the Division of Environmental Biology at the National Science Foundation (NSF), which funds Harmon’s research through its OPUS, or Opportunities for Promoting Understanding through Synthesis, program. “These tiniest life forms–insects, fungi and bacteria–are reservoirs of diversity that recycle our biosphere.”

In the mid-1980s, Harmon and other scientists dragged hundreds of logs with different diameters into an old-growth Douglas fir forest at NSF’s H.J. Andrews Long-Term Ecological Research (LTER) site in Oregon.

They watched as beetles moved into the dead logs. “Beetles foster decomposition through the fungal spores they track deep into the logs,” says Harmon. “The fungi use the toughest part of the wood as food. In doing so, they help release nutrients into the soil.”

Over 30 years of observation, scientists estimate that hundreds of species have moved in and called the dead trees home.

Despite the expectation that all dead wood would decompose at a slow and steady rate, Harmon has found that tree rotting is a unique process. It depends on the tree species, the fungi that take up residence, the moisture content, the geographic location and the size of the tree.

Scientists now know that some of the nutrients from a rotting log are returned to the forest floor to replenish the soil almost immediately.

Doing so creates a more diverse landscape, leaves nutrients on site, and provides habitat for species like bluebirds and woodpeckers that nest in tree cavities.

Dead wood was long considered a wasted resource and a hazard in forest landscapes.

But it performs a range of ecological functions: as habitat and food sources for many terrestrial and aquatic species; seedbeds for plants, including new trees; a source of water, energy, carbon and nutrients for the entire forest; and an agent that controls stream structure and function, reports Harmon in a 2013 paper in the journal Forest Ecology and Management.

Research on dead wood has since gone global. Dead wood is now a key feature of understanding forest biodiversity and carbon cycling as well as how stream systems function.

Knowing the ecological value of dead wood influenced forestry practices and development in the Pacific Northwest. That, in turn, changed forest management plans throughout North America and around the world.

Today, many stream habitat restoration projects, for example, focus on the reintroduction and maintenance of large pieces of dead wood in channels to create habitat for species such as salmon.

The art of dead wood

Harmon and other scientists at OSU have invited artists to use the idea of dead wood as a starting point for creating various types of artwork. An exhibit, “Rot: The Art of Dead Wood or The Afterlife of Trees,” will be unveiled in February 2016 at the Corvallis Art Center.

Harmon hopes the exhibit will bring an awareness of the value of dead trees to the public.

#1353159 OPUS: The function of dead wood in forest ecosystems: A synthesis for the next decade