Trouble in the air? 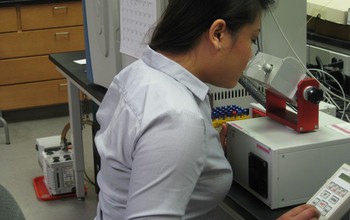 Among the earliest warning signs of the 2014 West Virginia chemical spill were widespread reports of a peculiar odor: licorice.

Residents associated this smell with danger. Indeed, smell can alert us to different types of danger such as fire, airborne toxins or spoiled food. But did this particular odor indicate trouble? To what extent is the human nose capable of sniffing out the difference between a harmless change in chemistry and a harmful poison?

Researchers funded by the National Science Foundation (NSF) have been investigating these fundamental water chemistry questions since the spill.

“Our sense of smell and taste are governed by chemical reactions between specialized cells in the nose and mouth with nanoparticles released by substances in the environment,” said Andrea M. Dietrich, a professor of environmental and water resources engineering at Virginia Polytechnic Institute and State University (Virginia Tech).

The source of the olfactory alarm for West Virginia residents was an approximately 10,000-gallon spill of crude 4-methylcyclohexane methanol (MCHM) into the nearby Elk River.

The spill originated from a storage facility for chemicals owned by Freedom Industries, which used MCHM to remove impurities from coal that would contribute to pollution during combustion. The human health effects of exposure to MCHM include nausea, vomiting, headaches and rashes.

Immediately following the spill, NSF Grants for Rapid Response Research (RAPID) brought in the expertise of the research community to study the chemical properties of MCHM. Information on MCHM’s toxicity and health effects is scarce; hence, the need for continued study.

Dietrich worked with fellow Virginia Tech faculty Daniel Gallagher and Paolo Scardina to address significant gaps in understanding how MCHM behaves in water and water pipes. This included an investigation into the relationship between smell and other properties of MCHM.

Residents detected the licorice odor of MCHM for months after the water supply was declared safe for consumption.

“Throughout the crisis, the severe lack of reliable data for chemical, toxicological and odor properties resulted in confusion for everyone from utility and government officials to residents,” Dietrich said.

Dietrich’s group used a chemical detection device that the flavor and fragrance industries has utilized since the 1980s to identify odors. The method allows for direct measurement of odors in their gaseous phase, enabling researchers to identify the concentrations of a particular chemical and simultaneously connect it to a person’s description of a smell.

The sensitivity of the human nose is old news to the fragrance industry, but surprised the environmental engineers working on Dietrich’s team.

What does the data tell us?

Research revealed that different chemical versions of MCHM, known as isomers, created different odors and had different thresholds for when humans could detect them. Test participants could distinguish unique odors between two MCHM isomers — the licorice-smelling one was 2,000-fold more odorous than the other isomer, which did not smell of licorice.

Both isomers caused the same ill health symptoms, and authorities did not distinguish between them in water tests.

The Centers for Disease Control established a safe concentration of MCHM at 1 milligram per liter of water, and their testing protocols were designed to monitor that concentration level. However, many residents could still detect the licorice/chemical odor at a concentration one thousand times lower.

This difference in sensitivity to similar concentrations of MCHM explains why people reported a strange smell but the authorities could not monitor the cause of the smell with their equipment.

The research also showed that MCHM evaporates more from warm water than from cold or room temperature water. Thus, West Virginia residents had higher exposures and could more easily detect the licorice odor when using warm water, such as during a shower.

A few of the chemicals in the MCHM spill evaporated so well from water that a 15 minute shower led to a greater exposure than drinking 2 liters of contaminated water.

In the future, Dietrich intends to examine exposure through inhalation and ingestion.

Information on MCHM’s toxicity and health effects is scarce; hence, the need for continued study.