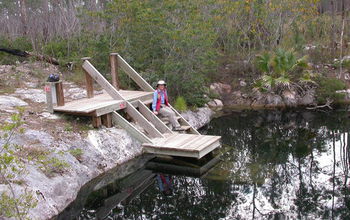 Nearly 100 fossil species found in a flooded cave on Abaco Island in the Bahamas reveal a story of persistence against all odds–at least until the time humans stepped foot on the islands.

Researchers say the discovery, detailed in a paper published this week in the journal Proceedings of the National Academy of Sciences, shows that human activities pose a threat to the future of island biodiversity, with modern climate change not necessarily being the most important factor.

“The results of this project provide another perspective on the ways natural and human forces have interacted over time and space,” says Tom Baerwald, geography program director at the National Science Foundation (NSF), which funded the research. “Although focusing on one locale, this project expands our insights into nature-human interactions for nearby regions, including many parts of the U.S.”

Baerwald adds, “The rich array of materials discovered, and their value in helping interpret past environmental conditions, helped lead to the inclusion of these sites in new national parks and marine reserves in the Bahamas.”

Exploring why some species were more flexible than others in the face of climate and human-driven changes could alter the way we think about conservation and restoration of species today.

Scientists fear that activities like habitat alteration and the introduction of invasive species could pose the greatest risk to island species, says lead paper author David Steadman, ornithology curator at the Florida Museum of Natural History.

Abaco Island has lost 39 of the species in the study. Of those, 17 species of birds likely fell victim to changes in climate and rising sea levels around the end of the Ice Age, about 10,000 years ago.

The 22 other species of reptiles, birds and mammals persisted through dramatic environmental changes, only to vanish when humans first arrived on the island 1,000 years ago.

“What we see today is just a small snapshot of how species have existed for millions of years,” Steadman says. “The species that existed on Abaco until people arrived were survivors. They withstood a variety of environmental changes, but some could not adapt quickly or drastically enough to what happened when people showed up. There must be different mechanisms driving these two types of extinctions. What is it about people that so many island species could not adapt to?”

Steadman and colleagues, including Janet Franklin of Arizona State University, hope to answer that question later this year when they return to the Bahamas with a National Science Foundation grant that will allow further exploration of caves on Caribbean islands.

Which species went, which remained?

The research will expand the picture of the species that disappeared when humans arrived versus those that survived.

For species that were lost at the end of the Ice Age, climate change, habitat change, and rising seas (with resulting smaller islands) may have caused their populations to become too small to remain genetically viable, resulting in inbreeding.

Some of the species that persisted until people arrived were depleted by human activities that altered forest habitats.

The research also shows how quickly humans can modify habitats. Unlike during the Ice Age, modern climate change and other human-driven changes often go hand-in-hand.

Future research will explore whether there are genetic differences between the Bahamas species that persisted and those that were lost when humans arrived. The scientists hope to learn whether there’s a genetic basis for adaptability.

“The answer could help us predict what animals will be affected most by a changing climate, and by humans,” Steadman says.

Steadman’s and Franklin’s research is also funded by NSF’s Division of Environmental Biology.