4-D laser printing: holograms and beyond 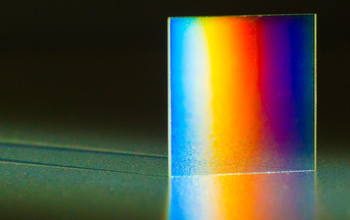 He created a tool that did much more.

The technology is a new way to manipulate light, with applications from studying alien worlds to making cellphones more energy efficient.

“Not long after we received the NSF funding, we were able to create something called the direct-write laser scanner (DWLS), which allows us to create nearly perfect geometric phase holograms,” says Escuti, an engineer at North Carolina State University (NC State).

“They look like flat, semi-translucent plates, but they give us unprecedented control over the behavior of light. We can use them to make more efficient displays for mobile devices, sensors with greater resolution, and, frankly, we’re still discovering all of the potential applications for this technology.”

To make geometric phase holograms, the DWLS “prints” using an ultraviolet laser on a super-thin film–only about 50 nanometers thick. The film is made of a photoreactive polymer that responds to both the intensity and the polarization of the light. When the DWLS is done printing, a much thicker layer of liquid crystal is applied, amplifying the pattern on the underlying thin film.

To understand how the DWLS works, you have to understand that it doesn’t have an inkjet–it prints light, and it prints in four dimensions.

The DWLS prints in horizontal and vertical dimensions, just like a regular printer. And it can also vary the intensity of the light. But, crucially, it is also capable of controlling the orientation angle of the linear polarization of the light.

In other words, a laser can be pointed directly at an object and, while the polarization angle may change, the direction of the laser beam relative to the object stays the same.

One reason the DWLS is unique is that it produces geometric phase holograms that are smoothly varying and create complex patterns seamlessly–there are no dividing lines or pixels, unless they are actually desired. This prevents light from “leaking” out of the pattern and corrupting the signal coming out of the hologram.

From the lab to the stars

After creating the DWLS, Escuti looked for potential applications. And that search brought him to a team of astronomers at Leiden University, including Frans Snik, Matthew Kenworthy and Christoph Keller.

For years, astronomers have devised telescopes that, in theory, can use light to help them unravel the mysteries of the universe. But these theoretical designs were often hampered by the limits of technology.

“Light is everything in astronomy–it’s the carrier of almost all information and knowledge we have of the universe,” says Snik.

Now Escuti was being asked to help turn theory into reality.

“The astronomers I am working with at Leiden had ideas for novel components and instrument designs that could make better use of the light collected by telescopes,” Escuti says. “They wanted to know if we could make holograms with specific characteristics that had previously been technologically impossible. And we could.”

For example, he says to his team has provided the astronomers with geometric phase holograms that they have used build advanced coronagraphs–telescopes that can see things close to stars–to study exoplanets beyond our solar system.

“They wanted to redistribute the blazing light of the halo around a star, so that the faint light coming from a planet orbiting that star can be observed with better contrast–and then analyze the planet’s light to learn about its composition and other characteristics,” Escuti says. “They’re now able to do that with better performance than ever before. We’ve been working with them for a few years now, and have helped create several new astronomical tools.”

“With these components and techniques, we have for the first time in perhaps many decades fundamentally expanded the astronomer’s toolkit for manipulating light from astronomical sources,” he says.

Down to Earth applications

In addition to astronomy, the DWLS has found use in creating geometric phase holograms for use in mobile displays, holographic imaging and remote-sensing devices for everything from satellites to cameras. One high-profile application was the visually impressive “Rainbow Station,” an art installation conceived by Daan Roosegaarde and designed in partnership with Snik for the International Year of Light.

Escuti is continuing to work on new applications with direct support from NSF and the Jet Propulsion Laboratory, and in partnership with fellow NC State faculty member Michael Kudenov on projects supported by the National Institutes of Health, the Department of Energy and the Department of Defense. But he has also taken steps to commercialize the technology by integrating it into devices for specific market applications.

“As an entrepreneur, I’m excited by the wide range of projects and markets where we can have an impact. That’s important to me,” Escuti says. “As a researcher, I’m deeply satisfied by the capability of the DWLS to help people solve longstanding research challenges. At least a dozen times in the last few years, my scientific and engineering peers have told me: ‘You’ve done something we didn’t think was possible.’ That’s a tremendous feeling.”