How much did indigenous peoples alter the Amazon forest? 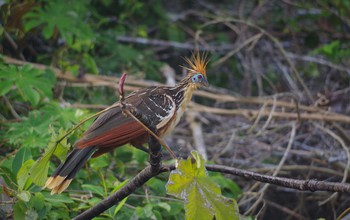 Effects were likely only along major waterways

Their effects were almost imperceptible in rainforest areas more than a day’s walk from a river, according to new research published in the Journal of Biogeography.

Lead author Mark Bush, a biologist at the Florida Institute of Technology, says, “No one doubts the importance of human actions along major waterways, but whether humans had a greater effect on the ecosystem than any other large creature has yet to be established in much of Amazonia.”

Amazonia supported sophisticated cultures before Europeans’ arrival, but Bush and an international team of scientists argue that a recent emphasis by researchers on Amazonia as a manufactured landscape overstates the facts.

Bush and his collaborators “have reversed a decades-long trend of finding an ever-increasing extent and ecological effects of human settlement in pre-Columbian Amazonia,” says George Malanson, a program director in the National Science Foundation’s (NSF) Division of Environmental Biology, which funded the research.

Malanson says this review of paleoecological data aims “to strengthen a moderate view of Amazonia that was neither pristine nor completely settled.”

Amazonia, nearly the size of the continental United States, is a vast landscape. “Extrapolations about human effects from a few archaeological sites, mainly located along watercourses, must be tempered in the face of more wide-ranging data,” says Dolores Piperno of the Smithsonian Tropical Research Institute, a co-author of the paper.

The paper’s findings are relevant to modern society and conservation, its authors believe.

If forests were heavily modified prior to European arrival–as suggested by some recent research–then, Bush says, “they have regrown in just over one tree generation to support their incredible biodiversity.” Such rapid recovery could be used to justify logging forests aggressively because they would regrow, he says.

If, on the other hand, humans had limited influence on forests, the woodlands might not regrow as readily after major disturbances, and logging could lead to long-term degradation.

These questions are important as policymakers decide whether to enforce or relax protections on areas already designated as parks, such as the Yasuni of Ecuador, according to Bush.

The researchers conclude that pre-European land use by the native peoples in Amazonia varied widely in space and time, but that vast areas of the Amazon were hardly affected by human activity.

The study was also supported by Brazil’s National Council for Scientific and Technological Development, Brazil’s Coordination for the Improvement of Higher Education Personnel, the Smithsonian Tropical Research Institute, and the National Museum of Natural History.