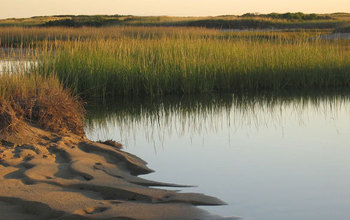 Marsh grasses should be spaced close together, not far apart

When restoring coastal wetlands, common practice calls for leaving space between new plants to prevent overcrowding and reduce competition for nutrients and sunlight.

A new study, conducted to restore degraded salt marshes in Florida and the Netherlands, has found that clumping newly planted marsh grasses next to each other, with little or no space in between, can spur positive interactions between the plants.

In some test plots, plant density and vegetative cover increased by as much as 300 percent by season’s end.

“This is a really small design change that can yield greatly improved results, without adding to restoration costs or time,” said Brian Silliman, a marine ecologist at Duke University. “It’s essentially free success–higher yields at no added expense.”

Silliman and his colleagues published the results in this week’s issue of the journal Proceedings of the National Academy of Sciences.

The finding, which is applicable to a wide array of coastal restoration efforts worldwide, upends a 40-year-old theory borrowed from forestry: New plants, called “out-plants” by restoration ecologists, need to be spaced well apart from each other to reduce competition and generate the highest growth rates.

“In a low-stress field or forest that makes sense,” Silliman said. “But in the tough, volatile environment of redeveloping coastal wetlands, it’s a different story.”

A plant that is spaced too far from other plants and species in a restored wetland will experience not only fewer negative interactions but also fewer positive ones, which often outweigh the negatives.

Left to fend on their own, small out-plants will have more trouble resisting erosion, overcoming low oxygen levels in soil, surviving infestations and withstanding overgrazing by marsh herbivores.

In a marsh, get closer to neighbors

“The bottom-line message is: A coastal wetland plant that is close to its neighbors will grow better than a plant that isn’t,” Silliman said. “The findings clearly demonstrate that planting closely does not spur negative competition. It allows positive interactions to flourish, so plants can work together to survive.”

Convincing others to adopt this new approach may prove a challenge.

A survey conducted by Silliman and his team as part of the new study found that 95 percent of restoration organizations in the United States still adhere to the old forestry-based practice of dispersed planting. The practice remains common in other countries as well.

“In China, where coastal marshes have experienced massive die-offs from drought and overgrazing, people have tried unsuccessfully to restore them using the old paradigm that spaces out plants,” said Qiang He, also of Duke and a co-author of the paper. “It’s possible that changing planting designs could greatly improve success of salt marsh restoration there, as clumping could protect plants from salt stress and overgrazing.”

Silliman added, “In the very near future, conservation will entail immense restoration projects on the scale of whole ecosystems, islands or cities. We won’t just be restoring them; we’ll be augmenting existing ecosystems and creating new ones to provide the services we need.

“Increasing our yields and decreasing our costs to achieve these goals must be a high scientific priority. This study takes a big step in the right direction by showing how harnessing positive interactions can increase restoration success.”

Funding for the study also came from the Netherlands Royal Society of Arts and Sciences and the Edward Stolarz Foundation.