Where do rats move in after disasters? This team finds out 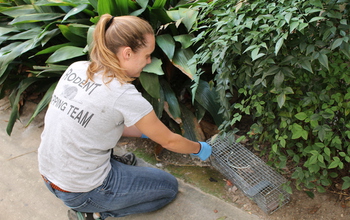 Imagine you’re a researcher working outdoors in a New Orleans summer. It’s 100 degrees, and you’re going door-to-door in neighborhoods where people have grown tired of being studied by outsiders in the decade since Hurricane Katrina. And in the best-case scenario–on a very good day–you wind up handling a bunch of disease-carrying rats.

That’s what Tulane University molecular ecologist Michael Blum and his research team do and have done for six months in each of the last three years. The work may sound unpleasant, but Blum says it’s laying the groundwork for a potentially powerful tool in disaster relief: a mathematical model that could simulate how environmental changes, natural or man-made, affect populations of rodents that carry pathogens hazardous to human health.

Support for this endeavor comes from the National Science Foundation’s (NSF) Dynamics of Coupled Natural and Human Systems Program, which is managed by NSF’s directorates for Social, Behavioral and Economic Sciences; Geosciences and Biological Sciences.

“The research would allow you to ask questions that could apply to very specific areas, like ‘If you knocked this city block out, how would it affect movement of rodents from one neighborhood to the next,'” Blum said.

It would also allow for smarter public policies based on data that show where rats likely are living–not on assumptions about where they might be found.

“Where are the rats?” Blum said. “What’s the risk of contact? Those are factors that are driven by human behaviors, and those behaviors depend on risk perception.”

Risk perception is incredibly important. It drives personal decisions and government action. In a sense, it doesn’t matter where the rats are, so much as where people think they are.

Researchers have long known that human behavior, from where people live to how they dispose of trash, affects rat populations. But there’s been scant data to show how those relationships play out.

If policymakers perceive that the highest risk of rodent infestation is in areas most densely populated with humans, they will concentrate countermeasures in those places. But, what if that perception is based on an incorrect assumption, or if there are more variables in play? The type of data these researchers are generating can bring such perceptions in line with the facts.

Why are rodent populations, and their movements, so important after disasters? Because events like Hurricane Katrina can change the ecology of a particular area, making it more favorable to rats and other vermin. At the same time, they can curtail some of community services that can keep pests in check.

Strong contrasts in environments help scientists understand factors that drive change in something like a rodent population, and post-Katrina New Orleans provided plenty of contrasts. Blum’s team examined the differences between flooded and dry areas, and populated and depopulated areas.

“There aren’t a lot of places in the country with night-and-day environments like this after a catastrophe,” Blum said.

For hundreds of years, humans worried about rats as agents of disease, and the last century has resulted in a rich body of research on the rodents. But, Blum said, that work tended to focus on how rats interact with their physical environments–not so much on how their lives overlap with humans living in the same areas.

Work by Blum’s team has helped fill in that gap and challenged a few previous assumptions about rodent populations.

For one, a common belief says that greater human population density equals more rats. But that doesn’t match current findings, Blum said. Researchers found that when humans abandoned spaces, the rats moved in. And the conditions of those spaces mattered–a block of abandoned but maintained houses attracted smaller rodent populations than equivalent areas with overgrown lawns and other upkeep issues.

“There is a relationship between population density and rodent densities here,” Blum said. “But it’s an inverse one. We’re finding hotspots in the city associated with abandonment.”

Leptospirosis is a bacterial infection that can result in symptoms ranging from headache to kidney failure and bleeding from the lungs. Humans become infected by drinking or swimming in water tainted by rodent droppings that carry the pathogen.

“If it goes undiagnosed, it can kill you,” Blum said.

Among U.S. states, only Hawaii considers the disease a likely threat to public health; notices posted at Hawaii’s freshwater ponds, waterfalls and streams advise people of the risk. Otherwise, the disease is mostly considered a problem in the developing world, particularly in tropical areas.

But, Blum and his team’s findings deviate from the conventional wisdom. “If you look, it’s actually prevalent across the New Orleans landscape,” he said. In some areas, up to 30 percent of rats carry the pathogen.

When combined, those two findings–how human behaviors affect where rats actually live and the diseases rats carry–illustrate how the researchers’ findings could help protect areas after disasters. The team’s findings could provide a factual basis for risk perception.

Much of the research team’s work involves analyzing rodent data gathered from other sources. The scientists have call logs to city services reporting rodent sightings that show a steady decline from a high in 2006.

“Either people are seeing fewer, or they’ve gotten used to them,” Blum said.

The researchers used those logs as a starting point for their work nearly nine years ago. But getting the best data on the current rodent population and pathogen levels requires getting out into the field, and that poses a challenge in post-Katrina New Orleans, which saw a steady stream of scientists and engineers come through after the hurricane.

“These communities are very well-researched, and they’re not exactly eager to be studied again,” Blum said.

To help gain residents’ trust and cooperation, the researchers run an operation that is deeply embedded in the community. Many of the project’s researchers and workers are from New Orleans. They don “Rodent-Trapping Team” t-shirts with big rat logos on the front and go door-to-door explaining what they’re doing and asking for access to yards and other private spaces.

That’s just one step in the process, though. Rats, as it turns out, are incredibly smart and difficult to trap. On occasion, the researchers experiment with baits and methods to catch rats, but mostly they put in time. For three months in the summer and three months in the winter, they trudge through study areas collecting traps, baiting new ones and collecting data.

And, in this research environment, it’s cause for celebration when they find a rat.

“All I can say is I’ve got some great graduate students,” Blum said.

#1313703 CNH: Diversity and Disease in a Post-Trauma Urban Landscape