At the intersection of neuroscience and art 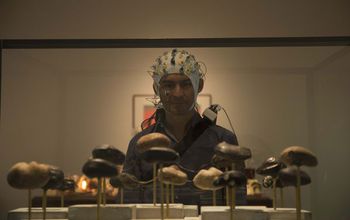 Blending cognition and engineering to reveal the neural basis of creativity

There is a neural orchestra inside your head.

The music comes from tiny electrical signals produced by millions of neurons in the brain, always playing and often changing, depending on what the brain is processing.

Listen to the orchestra and you’ll gain insights into fundamental neural activity and how it differs across individuals. Researcher Jose “Pepe” Luis Contreras Vidal is listening and he’s doing so from outside the confines of his University of Houston lab.

With National Science Foundation (NSF) funding, Contreras Vidal collects neural activity data from hundreds of individuals as they peruse art museums, play games, paint, draw and dance. His research, at the intersection of neuroscience and creativity, could lead to a deeper understanding of neural activity and help design more effective, safer biomedical devices.

It has also introduced people to their very own neural orchestras.

“We’re getting data we clearly need,” Contreras Vidal said. “But it’s also great in terms of outreach. You can actually combine science and art and engineering.”

The brain on art

Collecting brain activity data from freely behaving individuals has in the past proven very difficult, Contreras Vidal said. Recruiting a large, diverse group of people and bringing them into a lab poses an additional challenge. To solve the first problem, his team used EEG caps skullcaps fitted with special sensors to record electrical activity in the brain. The wireless caps allow people to move freely and interact with their environments.

To solve the second, the researchers brought the lab to the people. For its testing ground, the team used “The Boundary of Life is Quietly Crossed,” an exhibit at The Menil Collection, a Houston art museum.

In the exhibit, Houston based conceptual artist Dario Robleto explores the history of the human heartbeat, from early life recordings to artificial heart development. Robleto was trying to better understand neuroscience for the exhibit; he heard of Contreras Vidal’s research and, one day, showed up at the engineer’s office. That initial meeting sparked their collaboration, which allowed the research team to eventually collect neural activity data from more than 400 people who volunteered to wear EEG caps.

Contreras Vidal and his team combined the recordings with data about how participants moved through the exhibit–to correlate changes in the EEG readings with particular pieces of art and basic data on the participants themselves (age, gender and which piece they found most beautiful, and most emotionally evocative).

The team has since expanded this type of collaboration to other museums. A special Minecraft day at the Houston Children’s Museum allowed the team to record EEG data from 250 children as they played the popular computer game. The team will soon start collecting data from patrons of the Houston Museum of Fine Arts.

“We’ve been nicely surprised at the response from the museums,” Contreras Vidal says. “They rarely get information back from their public about what they like and what they don’t like.”

With this research, museum officials can see which pieces have the most profound impact on patrons and draw insights for the first time about how the brain responds to the aesthetic museum experience.

The experience is also a first for participants, who can watch the EEG recordings in real time. For the vast majority, it’s the first time they’ve seen their electrical brain activity.

“I remember seeing a lady with her daughter, both wearing the EEG headset, comparing their brain activity,” Contreras Vidal says. “And they were asking questions, which is very important.”

The team is exploring other opportunities to collect EEG data, including a collaboration with the Blaffer Art Museum, affiliated with the University of Houston. Contreras Vidal fitted a dancer with an EEG skullcap as she performed on stage. The cap allowed her to control the stage lights with her brain while she danced.

The researchers repurposed Exquisite Corpse, a game made famous in the 1920s by surrealist artists. People take turns writing or drawing on paper, then fold it to hide their work and pass their sheets along to other artists, who do the same. The team fitted three Houston area artists with EEG caps, recorded their brain activity as they played Exquisite Corpse, and invited an audience to watch the performance.

“We want to really look at how the brain activity shapes the creative process,” Contreras Vidal says. “How they are related.”

His research could help reveal that basis and offer more effective, personalized treatment for depression, pain and more.

The massive amount of data streaming in from the research could also lead to fundamental insights about the brain specifically, how complex cognitive and neural systems operate in natural environments. The EEG data is from a diverse group of people with different ages, genders and occupations, so it can therefore show how neural activity varies across populations and even between individuals. Such knowledge can help researchers better tailor the burgeoning biomedical devices industry to meet individual needs.

The EEG data also creates a sort of neural map, revealing what parts of the brain respond to different aspects of the aesthetic museum experience. This mapping illuminates neural networks, revealing how different areas of the brain talk to each other. And it can reveal new information about the way people perceive, think and feel about art while they are experiencing it.

The team is in the first year of its NSF award, working on analyzing the Menil data to identify specific examples of neural variability and improve the EEG caps to make them more user friendly. So far, the researchers have collected data from about 700 individuals; the plan is to increase that by a few thousand.

“Maybe in 10 years or so, we will have neural technology just like our smart phones; you can wear it and contribute to science,” Contreras Vidal says. “You can provide data that can be mined, whether you’re an engineer, or a doctor, or an artist trying to create something new.”

#1533691 NCS-FO: Assaying neural individuality and variation in freely behaving people based on qEEG