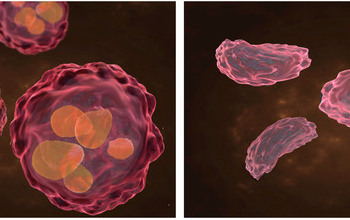 As any good “Star Trek” fan knows, Mr. Spock was a “green-blooded Vulcan” because his hemoglobin was copper-based, unlike our iron-based human cells. But even humans have a little bit of copper in their blood.

A new paper based on research funded by the National Science Foundation (NSF) explores the role copper can play in feeding — or starving — cancer.

For the past 20-30 years, researchers have known tumor cells need nutrients to grow, and copper was a favorite. But this month an NSF-funded researcher and collaborators published in Nature Chemistry new findings that took that research a step further, outlining a way to disrupt the delivery systems in cancer cells that allow them to feed off the trace copper in our bodies. The method would use small molecules to change the “traffic patterns” of two protein cell “chaperones” that transport copper in the cells.

As it turns out, depriving cancer cells of copper keeps them from growing. And now, this fundamental research is being shared with others who hope to transform this discovery into potential future cancer treatments.

“Breast cancer, leukemia, lung cancer, pancreatic cancer, prostate cancer — we saw effects in all of these,” said Chuan He, an NSF-funded chemist at the University of Chicago, who did the work with two other groups at the university, one led by Hualiang Jiang and the other by Jing Chen.

While He’s studies will require time to translate into a treatment for humans, the results could lead to an ability to target molecular chaperones to prevent tumors from getting the sustenance they need to grow.

“A majority of cancers have increased levels of these delivery proteins,” He said.

Building on other fundamental research

According to He, his research couldn’t have happened without previous fundamental research about copper trafficking and tumor growth.

“There are three lines of previous study,” He said. “The first line just told you that tumors accumulate copper. The second line, people tried to use copper chelators to get rid of copper entirely.” Chelatin is a chemical process that removes heavy metals from the body.

The problem with that approach: Copper is essential to human life. It travels in the bloodstream, preventing anemia and keeping immune systems functioning. Although humans don’t require very much copper, it helps metabolize cholesterol and glucose, and makes a difference in how our bones, brains, connective tissue and hearts grow and function. So removing copper entirely from a person’s body, something that was tried in clinical studies, had obvious shortcomings.

But, He noted, the third line of evidence from previous studies determined how copper is delivered to cancer cells.

“Our hypothesis explored copper trafficking [i.e., how it moved] inside the cell,” He said. “We found that the levels of these copper protein-delivery chaperones were higher in cancer cells versus normal cells. That suggested we could develop molecules to target these proteins and disrupt the copper delivery inside cancer cells.”

“This has a minimum effect on normal cells, and the tumor does not grow anymore.”

He’s research stems from approximately three decades of biochemists learning about copper and tumor cells. His research, too, is considered fundamental or basic, as it’s just beginning to test how specific small, organic molecules are able to control how copper transits in tumor cells in mice.

After more than five years of research, He and his team found that a majority of cancers rely on these higher levels of copper chaperones. But some cancers — kidney cancer, for example — do not.

So what comes next? The molecules that He and his colleagues found to target the copper chaperones have been licensed to other researchers to potentially turn into new kinds of cancer treatments. And his lab will also look at other ways to manipulate the copper’s mobility in tumor cells.

“As patients, we often only consider whether a medication does or doesn’t do what it’s supposed to do, but it’s rather dramatic how much fundamental science researchers need to know before they get to the point where they can build an effective therapeutic,” said David Rockliffe, NSF chemistry program director. “An ever-growing number of tools and approaches provide new understanding of molecular behavior that could ultimately be game-changers in modern medicine, presenting a whole new way to think about treatments.”

“It was five or six years ago when I decided to take this on simply because of a lecture by an expert in this field,” He said. “Scientists who pioneered the discovery and structural and mechanistic elucidation of fundamental copper trafficking deserve a ton of credit; they also inspired me.

“A lot of useful things come out of fundamental studies. At the beginning you don’t know what’s going to be useful. I was just listening to this wonderful talk and started wondering: If you target these proteins with organic molecules, what will happen to the cancer?”