A fine kettle of fish? 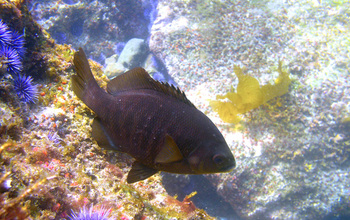 For years, scientific literature, as well as fisheries management and conservation efforts, has assumed that the survival of adult fish is relatively constant through time, and that most fluctuations in the numbers of adults come from variation in the number of young fish that are produced and survive to maturity.

However, new research reveals that fluctuating food supplies and competition can alter the survival of adult fish — at least for a Pacific marine reef species — and be a major cause of changes in their populations.

In the study, biologists Daniel Okamoto, Russell Schmitt and Sally Holbrook of the University of California, Santa Barbara, analyzed fish records collected over more than a quarter of a century.

The analyses showed that for black surfperch (Embiotoca jacksoni), survival of adults from year to year was strongly linked with both the amount of prey available and the number of fish sharing that food source. The findings appear this week in the journal Ecology Letters.

“We found that the survival rate varies through time, and is driven by local-scale processes of food variability and competition for that food supply,” said lead paper author Okamoto, now at Simon Fraser University in British Columbia. “That can have major implications for how we think about the effect of fishing on fish populations.

“Mortality from fishing and other human activities can greatly increase fluctuations in the number of fish in a population over time. That runs counter to management and conservation goals for harvested species.”

Schmitt and Holbrook began surveying the food supply of surfperch on Santa Cruz Island in the early 1980s. Year after year, they returned to the same locations and surveyed the surfperch and their prey, their habitat and different age classes of the fish.

“We wanted to know how much the food supply influenced the population dynamics of fish,” Schmitt said. “While everyone knows that food matters, we were surprised at how important it was compared with other causes of variation in the number of adult fish on a reef.”

“There were strong interactions among the amount of food and the fishes’ survival rate as well as the number of fish,” Okamoto said. “More fish lead to less survival because they’re competing for limited prey resources.”

Although the study targeted a single species, the research generalized the results for other fish populations.

“The degree to which survival rates vary through time is huge compared to what people expect in fish populations in the ocean,” Okamoto said.

Added Holbrook, “It’s known that fish species that are harvested tend to fluctuate much more through time compared with species that are not fished, and scientists have speculated about what could cause fishing to increase population fluctuations. Our analyses provide a mechanism by which mortality from fishing and other sources can destabilize a fish population.”

Long-term studies, Okamoto said, which look at the processes that give rise to variability affect how we think about sustainable fisheries and conservation measures.

“We suggest adopting precautionary approaches in fisheries until more is known about the complex relationships that shape fish population dynamics,” Schmitt said.