Video: Triceratops gets a new cousin! 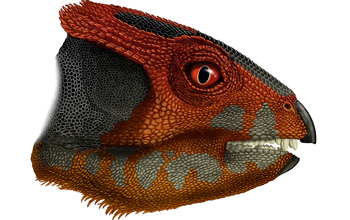 Triceratops has a new cousin! With support from the National Science Foundation (NSF), researchers from The George Washington University and the Chinese Institute of Vertebrate Paleontology and Paleoanthropology have uncovered a new species of plant-eating dinosaur that stood on its hind feet and was about the size of a spaniel. Named Hualianceratops (hwah lee-on sara tops) wucaiwanensis (woo sigh juan ensis), it lived early in the Late Jurassic period, some 160 million years ago.

The find is one of the oldest known of the ceratopsian or “horned dinosaurs.” Only it didn’t have horns, walked on two legs and was a very distant cousin to the larger, horned Triceratops that lived 95 million years later.

The species was discovered in the Gobi Desert of China’s Xinjiang province in the same fossil bed where an earlier discovered horned dinosaur, Yinlong, had been found.

Researcher Catherine Forster says that finding these two early species together reveals horned dinosaurs were more diversified at that time than previously thought.

The team says their analysis of the horned dinosaur family tree suggests not only were these two species around at that time, but three other lineages were also present, but have not yet been found.