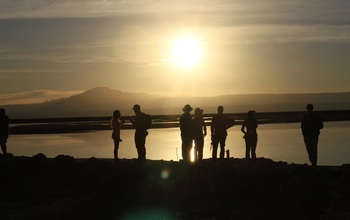 The anticipation is contagious.

On this crisp, clear night in West Virginia only two types of sounds fill the air as a group of teachers and planetarium managers walk down the road to a 40-foot radio telescope: footsteps and loud, jubilant outbursts of “can you see the star cluster Pleiades over there?”

Those exclamations quickly translate to pointing (still very much in the darkness) at a sky so awash with stars, a novice like this city writer can’t begin to find groupings as simple as the Big Dipper. There are just so, so many stars … and star clusters … and even another galaxy.

But the excitement in this rural place, where so much of the night sky is made clearer by the absence of light and noise pollution, is almost breathtaking. A 20-minute walk brings them to a telescope where they will no longer use their eyes to search throughout these skies. They will learn how radio waves — which don’t require brilliantly clear nights to show us the universe — augment what astronomers have been able to see with optical telescopes like Galileo’s since long, long ago.

“Astronomy gives us a vision — it sparks the imagination,” said Peter Detterline, a high school teacher and planetarium director in Boyertown, Pennsylvania. “Astronomy fills children with hope and wonder. It inspires them to go in new directions and try new things … and it’s fun.”

The scene isn’t so different from what this same group shared over the summer, as part of the Astronomy in Chile Educator Ambassador Program (ACEAP), a unique outreach program funded by the National Science Foundation (NSF). Detterline is one of nine formal and informal educators selected from 55 ACEAP applicants. The group visited three NSF-funded observatories in Chile. In November, they reunited for hands-on radio astronomy training at the National Radio Astronomy Observatory (NRAO) site in Green Bank, West Virginia.

Because stars, planets, pulsars and other celestial bodies give off electromagnetic radiation in the form of radio waves, astronomers are able to observe these longer wavelengths that have lower frequencies than visible light. Big dishes at radio observatories amplify radio wave signals, so astronomers can “see” far into the universe.

But because they are working with radio signals, these observatories must be located in areas free of potential radio interference like Green Bank, best known as the U.S. National Radio Quiet Zone.

In 2011, Tim Spuck was an amateur astronomer and astronomy educator. He learned firsthand then about the role ground-based astronomy in Chile played and how much the U.S. — and specifically NSF — invested in studying astronomy there.

For researchers either working in Chile or using data from the observatories there, the high altitude and dry setting provide an important vantage and prevent precipitation that can hinder the capability of some of the most high-tech equipment. This allows for important astronomical discoveries to be made right from our own planet.

But Spuck hypothesized that few outside professional astronomy circles knew this important science was taking place, and feared that lack of awareness would limit its lifespan.

To find out if his assumptions were correct, he surveyed a wide range of amateur astronomers. Only 54 percent knew of the Atacama Large Millimeter Array (ALMA), which NSF supports with international partners.

Only 30.5 percent knew it was a radio astronomy observatory and fewer knew it was located in Chile. ALMA has provided new perspectives on star formation, as in the case of the star HL Tau, and insight into how galaxies evolve. Spuck found amateur astronomers knew even less about other observatories in Chile, their capabilities and discoveries.

“If amateurs lack a grasp on even the basics, having never heard of the observatories, or fail to know their location, or types of observations made, can we say we have an informed citizenry when it comes to astronomy in the U.S.?” Spuck wrote in a project description applying for NSF funding in 2015. “If our ‘base’ has such limited knowledge, how informed is the rest of society? An informed citizenry is both desirable and necessary for long-term success of U.S. investments in Chile.”

Modeling his proposal on a successful NASA ambassador program, Spuck put forth the idea of bringing together a select group of enthusiastic individuals eager to learn — and even more eager to share this knowledge with others.

In the summer of 2015, the group spent nine days in Chile, touring the National Optical Astronomy Observatory’s (NOAO) Cerro Tololo Inter-American Observatory (CTIO), Gemini Observatory and ALMA. At each of the facilities, they heard lectures, received training, took part in informal discussions and had access to some of the world’s most respected astronomy researchers.

“ACEAP gives astronomy outreach educators a powerful tool that they can use when communicating astronomy to students and the general public, firsthand knowledge,” said Spuck, who serves as ACEAP’s principal investigator. “An informed citizenry is much more likely to remain supportive of astronomy. A supportive citizenry benefits the field of astronomy in many ways.”

When the ACEAP participants traveled to Chile, they encountered — in many cases — their first experiences with radio astronomy. And radio astronomy was the reason behind their recent reunion in Green Bank.

In addition to having the world’s largest, fully steerable radio telescope, the NRAO Green Bank site also includes other telescopes. Many of those instruments are still engaged in active research, including a venerable 40-foot telescope that has been in continuous use since 1987. It still operates with knobs, levers and a pen-and-paper plotter, allowing astronomy novices to appreciate how the radio antenna produces data that “sees” objects — a much more tactile appreciation than computer screens and cutting-edge equipment would allow.

Green Bank Telescope’s outreach coordinator Sue Ann Heatherly — also NSF-funded — introduced the group to the Skynet Junior Scholars program, which allows groups including the 4-H Club, home-schooled students or school groups to observe astronomy projects and participate in hands-on modeling activities. They interact with Skynet astronomers and engineers and collaborate with other youths as part of a secure virtual community. The project started out using modest telescopes at Cerro Tololo and takes advantage of available time on many other optical and radio telescopes.

“We wanted to engage kids with the instruments astronomers really use,” Heatherly said. She teaches 4-H leaders and other adults, including educator ambassadors, how to coordinate programs at their institutions.

This will likely provide yet another tool for the ambassadors, who seem to revel in finding new ways to reach out to different audiences and talk about ongoing U.S. astronomy taking place in Chile.

“I really needed more training on radio astronomy,” said Renae Kerrigan, planetarium director at the Peoria Riverfront Museum and an ACEAP ambassador whose blog shares many of her experiences. “It was great to manually operate a radio telescope. Learning more about radio astronomy and becoming part of Skynet Junior Scholars will be very useful to me professionally, and allow me to teach much more.”

Brian Koberlein, an ACEAP ambassador and senior physics lecturer at Rochester Institute of Technology, has more than 50,000 followers for his Google Plus blog, and leads the group in its efforts to publish a book about U.S. astronomy in Chile.

“I think one thing an experience like this does is give you context,” he said. “As a society, we crave meaning, and we try to impose what that meaning may or may not be. Astronomy gives us context in terms of where humanity is.”

In addition to managing the observatory at Sam Houston State University, Michael Prokosch, another ACEAP ambassador, teaches special education. He finds ways to incorporate simple bits of astronomy into his lessons, ranging from space weather to lunar eclipses. His blog now incorporates material that sprung from his experiences in Chile and with ACEAP.

“Astronomy is tied to so many other sciences,” he said. “It’s the oldest field … looking up at the sky wondering where that streak came from and what does it mean. That’s why I really like it.”

In their year-one evaluation report, ACEAP ambassadors uniformly credited the program with improving their astronomy communications skills and presentation abilities, especially as they related to U.S. astronomical science being conducted in Chile.

Additionally, they credited the program with expanding their scope of communications, particularly in social media but also with traditional media, where they participated in television and print interviews about their ACEAP experiences.

Each was only obligated to conduct seven outreach activities as part of the program, but exceeding that quota was the norm. Detterline talked about having done 11, with four more planned this year. The group as a whole stays in touch and talks about group projects to expand outreach even further.

“The impacts far exceeded our expectation,” Spuck said. “A major collaborative article has been published in Planetarian magazine, and the group is working on a book and has begun discussions about a planetarium show featuring the major U.S. observatories in Chile.”

Now, work begins to solicit applications for the next cohort of participants, who will travel to Chile in summer 2016. They expect the number of applicants to triple.

“These are the iconic places in observational astronomy. You know all of us recognized immediately that we had quite an opportunity with ACEAP,” said Jim O’Leary, senior scientist at the Maryland Science Center in Baltimore, who was quick to recount how ALMA scientists generously shared their time and knowledge with the group to ensure a full experience in Chile.

The group’s reunion on that November weekend was further evidence of a strong bond between one another and how ACEAP experiences have enriched their knowledge and consequently the science they bring to their various home institutions.

The return walk from the training telescope much later in the night takes extra care; the group now has all eyes turned upward, looking this time for this year’s better-than-usual Taurid meteor showers.

“Oh my gosh — did you see that?” several exclaim at once. “That was actually a fireball!”

And while they all stop to see if it might happen again, the fireball seems a little like a metaphor for the blaze the group hopes to make in exciting others with their love of astronomy.

Education and Special Programs in the Astronomical Sciences