After the Lecture: Hendrik Schatz 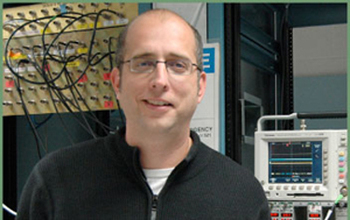 Nuclear astrophysicist Hendrik Schatz on chemistry exploits, chemical ‘fossils,’ and why fundamental science leads to so many important discoveries

Michigan State University’s (MSU) Hendrik Schatz sat down with us after his recent talk on “Challenges at the intersection of nuclear physics and astrophysics” as part of the National Science Foundation’s (NSF) Distinguished Lectures in Mathematical and Physical Sciences.

We learned that the same insatiable curiosity that prompted all kinds of chemistry experiments in his dad’s home laboratory intended for rock and fossil specimens continues to drive Schatz’s research for the origin of some very exotic elements in the universe today. He likes to describe it as sifting through the fossil records of chemical evolution. He’s also the director of the NSF Physics Frontier Center, the Joint Institute for Nuclear Astrophysics (JINA-CEE).

I was always involved in chemistry.

My dad had a lab. He was actually a dentist, but he collected minerals. However, I took the lab over pretty much. He had all the acids — everything. Beautiful.

My high school renovated the chemistry area and wanted to get rid of all the chemicals. But I said, “Hey, I want them!” And it was amazing. They had huge amounts of some really bad stuff. I liked making stuff and trying to understand things.

I hated fossil collecting. When I was a kid we would go to wonderful countries like England or Sweden and spend all day at these excavation sites. I would read a book or play by myself.

You never know what will happen. We’re doing experiments now that we would never have thought of years ago. You have to keep an open mind and do what is interesting.

What do I find the most interesting? Everything is interesting. It’s interesting that you can sit on your computer and figure out how a star explodes.

The other thing I really like about science is that people work together. You can call up someone in China and ask questions, even if you’ve never met this person before. It’s a great community.

Mine is basic research, so there’s no immediate benefit, but it’s still really important. I think there are two reasons for that: one is that it’s really important to understand how things work because sometimes there are unexpected benefits. But I think it’s also important in and of itself. People are naturally interested. They are interested because it is interesting. It’s interesting how a star explodes. It’s human nature to want to know the story behind it. If you hear about exploding stars, you want to know why this happens.

We can make isotopes for medical research and develop technologies to produce them more efficiently. For example, superconducting cyclotrons are now used in hospitals. But nobody would ever say “Let’s sit down and figure out how to build a rare isotope facility. Let’s get some engineers on it.” That would never happen without the driver of the science that propels people to do things that seem completely impossible.

Tellurium is used for solar cells. It’s a useful element. We like every element, and we want to understand where each comes from.

We’re trying to figure out what is happening inside neutron stars. There are some great new experiments coming up and some great theoretical work. We have some cool cooling models. Only at JINA do we have the opportunity to put all the physics in place… seeing it all together is very exciting.

Chemical evolution means the creation of the elements, which is nuclear.

Chemical evolution is really exciting because we’re now able to model the process. Basically you have the Big Bang, and then a galaxy forms. And at some point we got where we are now. We can simulate this entire history. We are also building a lot of new instruments like an underground accelerator to measure reactions in stars.

Be bold. You can do anything. If you only do stuff you know you can do, you won’t do anything useful.

#1430152 JINA Center for the Evolution of the Elements