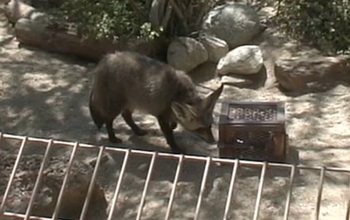 Why do dolphins evolve large brains relative to the size of their bodies, while blue whales and hippos have brains that are relatively small?

While there has been much speculation regarding brain size and intelligence, a new paper published in the journal Proceedings of the National Academy of Sciences confirms that species with brains that are large relative to their bodies are more intelligent.

This research “represents a novel and rigorous experimental test of the relationship between brain size and problem-solving ability using mammalian carnivores as our test group,” said Kay Holekamp, an integrative biologist at Michigan State University (MSU) and senior author of the paper. “Our results show that having a larger brain really does improve an animal’s ability to solve a problem it has never encountered before.”

Brain size is often used as a proxy for cognitive ability. Whether brain size can predict cognitive ability in animals has frequently been questioned, however, mainly because of the lack of any experimental evidence, Holekamp added.

To tackle this lack of scientific data, Sarah Benson-Amram, a scientist at the University of Wyoming and the paper’s first author, and collaborators traveled to nine U.S. zoos and presented 140 animals from 39 mammalian carnivore species with a novel problem-solving task.

Each animal was given 30 minutes to extract food from a metal box, closed with a bolt latch. The box was scaled to the animal’s size and baited with each study animal’s preferred food — red pandas received bamboo and snow leopards got steak.

“Does a larger brain imply greater intelligence?” asked George Gilchrist, a program director in the National Science Foundation’s (NSF) Division of Environmental Biology, which funded the research along with NSF’s Divisions of Biological Infrastructure and Integrative Organismal Systems. “This is a key question for those studying brain evolution.”

To address that question, Gilchrist said, the researchers “devised a clever puzzle that could be presented to multiple species — and discovered a strong correlation between relatively large brain size and problem-solving ability.”

Overall, 35 percent of the animals successfully solved the problem. The bears had an almost 70 percent success rate, and meerkats and mongooses were the least successful, with no individuals from their species solving the problem.

“This study offers a rare look at problem-solving in carnivores, and the results provide important support for the claim that brain size reflects an animal’s problem-solving abilities as well as enhance our understanding of why larger brains evolved in some species,” Benson-Amram said.

Living in large groups not a factor

“A hypothesis that has garnered much support in primate studies is ‘the social brain hypothesis,’ which proposes that larger brains evolved to deal with challenges in the social domain,” said Holekamp, who is affiliated with NSF’s BEACON Center for the Study of Evolution in Action.

The hypothesis posits that intelligence evolved to enable animals to anticipate, respond to and perhaps even manipulate the actions of others in their social groups, Holekamp said.

“If the social brain hypothesis can predict success at solving non-social problems, then we would expect that species that live in larger social groups should be more intelligent,” Holekamp said. “However, we did not find any support for that prediction in this study.”

#0939454 BEACON: An NSF Center for the Study of Evolution in Action