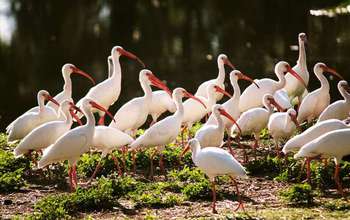 Find related stories on the NSF, National Institutes of Health and U.S. Department of Agriculture’s Ecology and Evolution of Infectious Diseases (EEID) program at this link.

In Native American folklore, the white ibis was the last animal to seek shelter before a hurricane, and the first to emerge after the storm. The ibis therefore symbolized the danger of an approaching storm, and also the safety after the maelstrom passed.

But now ibises may more often signal danger — at least in public parks.

People feeding white ibises in such places are turning wild birds into tame ones, scientists say. The researchers believe the practice may spread disease among ibises, and between ibises and humans.

The biologists are studying how hand-feeding is changing the health, ecology and behavior of white ibises in south Florida, where development is paving over the birds’ natural wetland habitats.

White ibises usually prey on aquatic animals such as fish, snails and crayfish, but they’re becoming accustomed to bread, fast food and popcorn from people, says Sonia Hernandez, a veterinarian and ecologist at the University of Georgia (UGA).

The shift in behavior could have serious consequences not just for the ibises, says Hernandez, but also for people. It may allow pathogens transmitted through feces, like salmonella, to build up and pose risks for both birds and humans.

“We found that the strains of salmonella bacteria white ibises are infected with are the same ones people get sick from, especially in Florida,” Hernandez says. “Because white ibises fly from urban to natural environments fairly easily, they could move these strains across large distances.”

The findings will ultimately apply to other wildlife species that live alongside humans in public parks and similar landscapes, the scientists say.

“Our interactions with wildlife can enliven our cities, but they also carry the potential for increasing disease risk to wildlife and to us,” says Sam Scheiner, an EEID program director at NSF.

“This study will provide important information on the consequences of our interactions with ibises — and serve as a model for managing urban wildlife,” says Scheiner. “The research is the most comprehensive to date on how food resources in human-dominated habitats influence wildlife responses to infectious diseases.”

Global urbanization: the risks it carries

Urbanization is expanding across the globe, with two-thirds of the world’s people expected to live in cities within the next 40 years.

Development is causing many wildlife species to decline. Some species, however, are capitalizing on new urban resources, especially food provided by humans.

Shifts in wildlife ecology in response to intentional or accidental feeding by people can alter animals’ susceptibility to infectious diseases, says Hernandez.

“Human-altered diets might change the makeup of these species’ gut bacteria and increase their susceptibility to infection,” adds Scheiner.

Easier in a park

In their NSF EEID project, the researchers are focusing on white ibises in Palm Beach County, Florida, where Hernandez has monitored the birds since 2010.

White ibises live along the Atlantic coast as far north as North Carolina and on the Gulf Coast west to Louisiana. The birds are usually nomadic and spend much of their days searching for food.

Why expend energy searching for food when humans in parks will provide it? Because it’s an easy meal. “If white ibises have a reliable food source, they often form large flocks that stay year-round in one place,” says Altizer.

Increasing numbers of ibises in urban parks facilitate contact with animals the ibises wouldn’t normally encounter, like mallard ducks, gulls and other city birds that are disease reservoirs.

The scientists are focusing on salmonella because it causes one of the most significant diarrheal diseases in people and results in mortality in young wading birds such as ibises.

“Urban ibises have extremely high levels of stress hormones and weak immune systems compared with other birds,” Navara says. “Ultimately, this could affect how pathogens, including salmonella, are transmitted among individual ibises and between the birds and humans.”

Soon the scientists will have further insights to offer. Their next fieldwork is planned for Feb. 10 to March 10, 2016. They will place GPS tracking devices on as many as 50 ibises in urban parks and 50 in natural areas.

The researchers hope the project will raise awareness about how “helping” wildlife species by feeding them may have unintended consequences. The findings will also lead to improved ways people and wildlife can share habitats in cities.

The result? Less danger in human-bird disease connections — and more optimism for our co-existence with wild species.