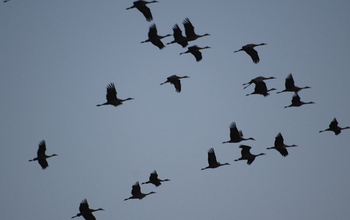 The migrants drifted sideways on crosswinds, the scientists found, but compensated for that drift near the Atlantic coast.

“The research has taken an innovative approach in showing how existing weather radar systems can be used to investigate the behavior of migrating birds,” said Liz Blood, a program director in the National Science Foundation (NSF) Division of Environmental Biology, which funded the research.

Blood said the ability to use the U.S. weather radar network to track migrating birds “opens new opportunities to study — in real-time — billions of birds during their migrations.”

Kyle Horton and Phillip Stepanian of the University of Oklahoma developed an application for observing migrating birds during nighttime flight.

Jeffrey Kelly of the Oklahoma Biological Survey and the University of Oklahoma and Cornell University’s Benjamin Van Doren, Wesley Hochachka and Andrew Farnsworth were also involved in the research.

The results are published in the current issue of the journal Scientific Reports.

“Until now, no studies have documented this large-scale phenomenon using weather radars,” Horton said. “Our analyses are based on detection of millions of migrating birds, as many as 5 million on a single night.”

The researchers looked at strategies of nocturnally migrating birds using Doppler polarimetric radars at three coastal and three inland sites in the eastern U.S. during the autumns of 2013 and 2014.

The results show a greater propensity of birds to drift sideways at inland sites; birds flying near the Atlantic coast increasingly oriented and tracked westward away from the coast.

The prediction that migrating birds compensate more for drift when encountering a migration barrier is consistent with the results, the scientists said.

The research indicates that at a regional scale, in a regularly and heavily traveled airspace of the bird migration system, birds routinely fly in crosswind conditions and have managed to compensate for such conditions, according to Kelly.

Migrants likely know their location relative to migration barriers while in flight, he said, and actively assess the degree to which they need to compensate for wind.

“The increasing automation of radar analysis will enable further exploration of U.S. weather radar data to achieve real-time monitoring of billions of birds during their migrations,” Kelly said.