After the Lecture: Lynden Archer 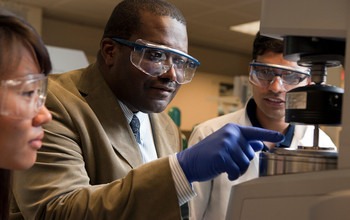 We sat down with Cornell University’s Lynden Archer after his recent talk on “Nanoscale organic hybrid materials and their application in next-generation energy-storage technologies” as part of the NSF Distinguished Lectures in Mathematical and Physical Sciences. Born and raised in Guyana, South America, Archer spoke about how his love for “materials” began and led to his interest in building a safer, better battery with more storage.

One of the biggest exports from Guyana at the time was bauxite, which is an alumina ore used to produce the metal aluminum. Mining and ceramics engineering played a large part in this industry.

My first science experience stemmed from reading a chemistry book that extolled the virtues of brewer’s yeast as a supplement for feeding livestock. One of my mom’s income streams at the time was that she raised chickens on a relatively large scale. She allowed me to experiment with a small part of her flock. Remarkably, the experiment worked pretty well. I was about 9 or 10 years old at the time.

My research these days is quite different. I am consumed by scientific questions related to designing better batteries. I sometimes wish that news stories with dramatic pictures of fires would spend a few minutes showing things researchers are doing that will soon yield batteries less prone to failure.

We can learn from battery research in the 1980s about the dangers of declaring victory too soon in any area of technology. For a long time, we thought energy storage in rechargeable lithium ion batteries was solved.

Lithium ion batteries that power your smartphone, laptop, electric vehicle and so forth represent a remarkable technology that operates at close to 90 percent of theoretical storage capacity. Unfortunately, when one considers what it takes to manufacture batteries, you discover other interesting fundamental problems that cannot be anticipated at the laboratory bench. Coordinated efforts by countries in Asia to pursue battery technology from discovery all the way to manufacturing allowed them to discover and address those fundamentally interesting questions related specifically to manufacturing. It’s why they are able to produce and sell less expensive batteries today. It is important for us not to make that mistake again — with robotics, autonomous vehicles and so forth.

I remember in high school once, a teacher telling me that I’d be a good lawyer. But that career path was not appealing. And I don’t think it was a compliment.

I’ve never seen any serious limits from being black because I was always as prepared as my classmates. It is a concern though to see us embrace a structure of schooling where opportunities are improved or diminished by local property taxes.

Our underrepresented minority students are not any less bright or any less inclined to pursue and succeed in careers at the frontier of science and technology; rather, these students often carry the legacy of being less prepared, which is a barrier to choosing careers in STEM fields. If students are given the same access to education at an early stage, I believe this is really the magic for getting equality in STEM.

I like to advise my students to always fast forward to success. Anything you’re doing, you should think, “What if I’m successful? What does it mean?”

My fundamental traits are curiosity, fearlessness and a certain level of competitiveness, and I think these have served me well over a career.

One of the things I’m excited about now are batteries that use Earth-abundant chemistries such as sodium and aluminum.

I used to be quite jealous of people who work on research in biomedical and biological sciences. Within a sentence, they could often communicate what they do and anyone gets its significance.

It is great that the science and engineering questions related to energy, carbon dioxide mitigation and sustainability — the so-called food, water, energy nexus — are a part of our everyday dialog.

How we manage energy, water and carbon dioxide emissions will define the impacts research in the 21st century will have on human civilization. And materials science is often at the root of finding solutions to these seemingly disconnected problems.