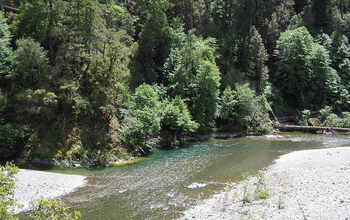 Each year on the United Nations-designated World Water Day, March 22, people around the world consider the importance of fresh water to ecosystems — and to us.

On World Water Day 2016, the National Science Foundation (NSF) looks at Earth’s critical zone — the realm on our planet’s surface between the forest canopy and bedrock — and the role water plays in sustaining that zone.

NSF spoke with scientists at California’s Eel River Critical Zone Observatory (CZO). The site is one of 10 NSF CZOs located across the country. Eel River CZO geologist William Dietrich and biologist Mary Power, both of the University of California, Berkeley, and NSF CZO program director Richard Yuretich offer insights into the role of water in the future of the critical zone — and our planet.

1. What is the critical zone, and why are we concerned about it?

Yuretich: Many of processes supporting life on Earth are hidden from our view because they take place between the top of the vegetation, or tree canopy, through soil and weathered rock, to bedrock. This is the critical zone, where water is stored, transformed and released to support life on Earth’s surface. Water circulation among the critical zone, the surface and the atmosphere regulates local climate and influences the evolution and dynamics of landforms and ecosystems. This thin skin where life meets rock is the part of our planet that’s critical to maintaining a hospitable environment for all living things, from microbes to humans.

2. Are people part of this critical zone?

Yuretich: Absolutely — and it is a two-way street. Our actions alter the balance of the storage, transformation and transport processes that take place in the critical zone, and these changes affect things we depend upon, including our food and water supply. Results of research at the Eel River Critical Zone Observatory show that human interventions and environmental change affect the water flow, toxic cyanobacteria and salmon populations in Northern California rivers.

3. How did the Eel River get its name?

Power: The Eel was named by 19th century European settlers for then-abundant Pacific lampreys, eel-shaped jawless fish that are unrelated to eels of North American rivers that drain to the East and Gulf coasts. Lampreys, like salmon, spawn in freshwater rivers, and their young live under sediments, eating dead organic matter for years. Then they migrate to river mouths and transform into parasites with circular mouths — without jaws, but with rasping teeth. Lampreys search for and attach to large fish like salmon and feed on their blood.

4. Why is the Eel River watershed a good example of Earth’s changing critical zone?

Dietrich: The critical zone in the Eel watershed was molded by geologic forces — plate tectonic collisions and subduction — that pushed up coastal mountain ranges along the western edge of North America, and by rain, whose runoff cut canyons into the landscape, triggered hillslope erosion and supported lush vegetation with roots that penetrated deep into the Earth. It’s the kind of critical zone that evolves in geologically active regions of our planet, where plate tectonics lift up mountains and steep river channels drain them.

5. How does the underlying geology determine important facets of the Eel River critical zone?

Dietrich: The Eel River basin is underlaid by different rock types derived from an ancient seafloor that slammed into the western edge of North America. The western belt along the Pacific coast is sandstone and shale. As this bedrock was uplifted by tectonic mountain-building, water in the top layers slowly drained out into river channels that cut down through hillslopes.

Where shale drains, oxygenated air and rain can enter, changing shale to a rusty red color and, importantly, fracturing it. Repeated fracturing opens spaces into the top layers, so rainwater can infiltrate. This “rock moisture” is held in pores and cracks, or passes deeper to saturate spaces and build up groundwater. The weathered bedrock becomes the crucial sponge of the watershed. It stores a lot of water during wet winters. This water is available to sustain forests during subsequent dry summers, while groundwater sustains river flows. It is this shale geology that supports the magnificent coastal conifer forests of the Eel River basin.

6. What were the historical uses of the river, and how did humans change it?

Power: Native Californians (including the Cahto, Wailaki, Weott and Pomo peoples) lived in villages in inland valleys but made seasonal expeditions to the coast to harvest seafood. They tended the forests using carefully managed cool fires to thin out undergrowth, particularly young Douglas fir. This allowed larger trees, including magnificent madrones and oaks, to flourish, and maintained a more open understory beneath the canopies of great old-growth trees. When European settlers arrived, they found giant trees, giant sturgeon and huge salmon migrations in the Eel.

By the 20th century, heavy exploitation of migrating salmon by these settlers severely depleted the runs. Seines were stretched across the river to capture entire salmon runs. Subsequent logging of old-growth forests removed most trees, beginning in the 19th century and continuing into the early 1980s. Forest removal and dense networks of unpaved logging roads caused huge loads of fine sediment to erode into the Eel River channel, degrading habitat for salmon and other river species. A final coup de grace arrived with the superfloods of 1955 and 1964. During these floods, the Eel broke through its weakened, deforested banks and became much wider, shallower and therefore warmer in summer and less suitable for salmon and other cool water-adapted species.

7. Has the river recovered?

Power: In the decades since unregulated logging ceased, improved timber management has allowed the Eel to begin to recover. Along many Eel river reaches, robust groves of alder trees have shaded and cooled the river, strengthened the banks, and allowed deeper, more salmon-friendly channel habitats to re-form. Recent low, slow, natural fires have occurred that have had opening effects on some of the forest, which can otherwise become choked with young Douglas firs. Opening the understory by removing these young brushy trees may increase water yields to the river during dry periods.

At present, however, this recovery is threatened by the burgeoning spread of unregulated marijuana cultivation throughout much of the Eel River watershed. Careless growers are drying up river reaches to irrigate their thirsty crops during summer droughts. Poorly engineered roads and water-holding ponds are failing. Fertilizers, pesticides and fuels are sources of potential chemical pollution. Scientists are hopeful, though, that new coordination across organizations will improve marijuana cultivation practices and provide oversight, so all growers will adopt more sustainable, environmentally friendly practices.

8. How have changes in the river affected its salmon population?

Power: Currently, the Eel River supports coho and Chinook salmon, steelhead/rainbow trout and a few coastal cutthroat trout near its mouth. Historically, there may also have been populations of chum and pink salmon in the lower Eel. Hope for salmon in the Eel remains, however. Although scientists lack consistent Eel River fish numbers, citizen scientists are counting thousands of salmon in pools along the river. They’ve found healthy habitat along several sections of the river.

9. If salmon were partially or totally removed from the ecosystem, what would happen to the Eel?

Power: The loss of iconic salmon populations would be a huge blow to both the ecosystems and the human cultures of the Eel and other rivers of the California North Coast. Salmon are a valued food of humans, bears, otters and other predators — not only tasty, but rich in health-promoting poly-unsaturated fatty acids (PUFAs). The source of PUFAs in salmon is diatoms, nutritious, microscopic algae. PUFAs are passed through the food web from diatoms to aquatic insects to salmon. In turn, salmon play an important role in delivering the nutrients diatoms need for growth — large salmon migrations enrich rivers far upstream with nitrogen and phosphorus as the fish die.

Dietrich: Eel River CZO scientists are finding that hardwood trees play a crucial role in cooling the sub-canopy environment during hot Mediterranean summers. Measurements of tree-atmosphere moisture dynamics and climate modeling show that if broad-leafed hardwood trees replaced coastal conifer forests, temperatures would be 2 degrees Celsius cooler. This is because hardwood trees transpire most in July, adding moisture to the air and cooling it.

Power: The prolonged California drought has stressed forests and river ecosystems alike. Eel River CZO researchers are documenting how the loss of summer water flow causes river pools to warm and become disconnected from flushing. Under warm, stagnant conditions, potentially toxic cyanobacteria overgrow the diatoms and other algae that sustain salmon-supporting food webs. Most of the Eel River’s harmful cyanobacteria produce neurotoxins. Critical zone “currencies” (the amount and seasonal timing of water released as runoff, its temperature and its chemistry) are what tilt the river between its salmon-supporting and its cyanobacterially degraded summer states.

11. What do the current and future states of the Eel have to tell us about other rivers in the U.S.? And around the world?

Power: Of all landforms, rivers are most vulnerable to damage. Agriculture, forestry and urban development have taken water, riparian vegetation and complex channel and floodplain structures away from rivers, and added heat, excess fine sediments and chemical pollutants. As low points draining landscapes, rivers collect and concentrate these pollutants. Of all landforms, however, rivers may be the most resilient. With adequate clean water flow and access to floodplains, rivers will cleanse themselves, repairing and rebuilding natural habitat and regaining the environmental regimes that allow algae, plants and animals to flourish.

Power: We are, and should be, worried about water availability through coming decades, even in regions that have been considered relatively water-rich, like the California North Coast. While fixing the processes altering Earth’s climate is proving daunting, we have more control over land uses that influence vegetation cover and the path of water through the critical zone. We need to think carefully about how our decisions will affect the recharge, storage, chemical transformations and releases of water as it moves in and out of these critical zones so we can wisely use water — the most essential and precious of all Earth’s gifts.

#1331940 The Eel River Critical Zone Observatory: exploring how the critical zone will mediate watershed currencies and ecosystem response in a changing environment