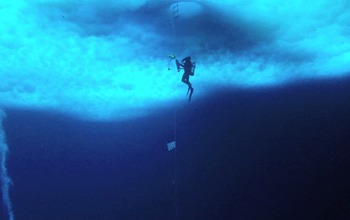 National Science Foundation (NSF)-funded researchers at the University of California, Santa Barbara, have collected the first long-term evidence that links rising levels of carbon and changes in ocean chemistry in Antarctic waters to the inability of tiny animals, such as sea snails, to build the protective shells they need to survive. As oceans absorb carbon-dioxide from the air, it makes the water more acidic, decreasing what scientists call the pH.

Pteropods, such as sea butterflies, a type of sea snail, are among the creatures that form the base of a food chain in the Ross Sea that includes predators such as Antarctic cod, penguins and Orca whales. Changes could have serious implications on the future survival of other creatures throughout the Ross Sea.

To monitor these changes, lead researcher Gretchen Hofmann and her team have been deploying automated ocean sensors around McMurdo Sound, Antarctica, since 2010, giving them the longest continuous dataset on ocean pH in the region.

By continuing to deploy these pH water sensors, the team hopes to gain a more complete understanding of the ocean changes and their potential effects on one of the world’s most biologically productive ecosystems, one of the planet’s few remaining marine wilderness areas.