Math for the real world 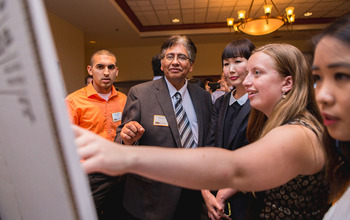 The students see math in everything. The obesity epidemic. The effects of second-hand smoke. Prison reform. Political ads.

They ask: Can we model these populations? Can we reveal what factors make a difference, and what happens when they change?

And, above all: Can I use math to help solve these problems?

“They are determined to solve an important problem,” says Carlos Castillo-Chavez, mathematical biologist at Arizona State University (ASU) and executive director of the school’s Simon A. Levin Mathematical, Computational and Modeling Sciences Center. “It is their choice, it is their problem and they work passionately.”

For the last two decades, Castillo-Chavez has worked with these students, attendees at the Mathematical and Theoretical Biology Institute (MTBI), a summer program for undergraduates funded by the National Science Foundation (NSF).

MTBI teaches students the core topics of mathematical biology, then sets them loose on a research problem of their choosing. The program is notable not only for the diversity of those problem topics, but for its resounding success in recruiting and training minority students.

Since MTBI was founded, 70 percent of the student participants have been from minority groups. More than half of all MTBI students have gone on to graduate school. The program has produced more than 100 Ph.D. students; 71 of which are underrepresented minorities. These numbers are impressive, especially when you consider that only about 7 percent of all science and engineering doctorates in the U.S. are awarded to minority students. The number is even smaller for mathematics Ph.Ds.

“The program’s model is quite unique,” says Jennifer Slimowitz Pearl, acting deputy division director of NSF’s Division of Mathematical Sciences that funds MTBI. “It’s clearly had a big impact, both on the lives of individual students and on the broader issue of increasing diversity in mathematics, a priority for NSF.”

MTBI has been nationally recognized for its work boosting diversity in mathematics. In 2011, the program received for a Presidential Award for Excellence in Science, Mathematics and Engineering Mentoring, the nation’s highest honor for STEM mentoring.

Castillo-Chavez credit’s the program’s success to its focus on student-led, socially relevant research.

“Many minorities think that getting involved in math is like playing chess — that you’re not going to be able to help anybody,” Castillo-Chavez says. MTBI teaches them otherwise. “It helps them realize they can contribute to their own communities.”

He entered the program just out of high school, and it revealed a world where math could help him understand and solve real-world issues.

This summer, Chowell will finish his graduate studies at ASU then head to Memorial-Sloan Kettering Cancer Center, where he will research the interplay between the immune system and cancer progression

Chowell is an author on one of MTBI’s most recent scientific articles, a roundup of Ebola-related research done by MTBI students. Notices of the American Mathematical Society published the paper this month.

The West Africa Ebola outbreak is the largest in history, killing over 11,000 people since the epidemic first started in 2014. Chowell wanted to know if it was possible to recognize infected people before they start showing symptoms and what that might mean for virus control efforts.

He discovered that while it was possible to identify infected people, the information is only worthwhile if there are enough facilities to isolate Ebola-infected people.

Another team highlighted in the paper worked on the spatial dynamics of Ebola — how behavior of people in infected regions influences the spread of the disease — and how mass quarantines, imposed to prevent Ebola, actually helped increase rates of the virus.

Forging a community of mentors

MTBI proved a humbling experience for Victor Moreno. In the beginning, when students take foundational classes in mathematical modeling and analysis, the graduate advisers — like Moreno — know pretty much everything. That changes after the students dig into their research topics. “You start realizing ‘I need to know a little bit more!'” he said.

Castillo-Chavez says realizations like those are the whole point.

Faculty — whose research interests are often highly specialized — like to have research topics under control. “That creates a sense that we are geniuses,” Castillo-Chavez said. “If students move us into a different direction, they realize that we don’t have the answers, that we struggle. And often they come up with better ideas.”

And they often become passionate about the research. Moreno, a Ph.D. student at ASU, says his group occasionally worked 15 hours straight, fueled by the challenge of finishing a manuscript (each team must present one at the program’s end) and the excitement of getting results from the data.

Two decades and nearly 440 students after MTBI started, the program has grown into a full-blown community. Undergraduates return as graduate advisers, who return as faculty mentors. MTBI alumni believe in mentoring at all levels, Castillo-Chavez says, and in building diverse communities.

Take Kamuela Yong. His own mentor was a MTBI alum. Her support helped pivot Yong, transforming him from an engineering student who solved math problems to a mathematician who solves ecology problems. She pushed Yong to get a higher degree — he’s likely the first native Hawaiian to receive a Ph.D. in applied math. A former adviser for MTBI, Yong is now assistant professor at University of Hawaii’i-West O’ahu and applying the lessons MTBI taught him.

“I’m now ready to be a mentor, and keep encouraging the next generation,” he said.

Workforce Program in the Mathematical Sciences