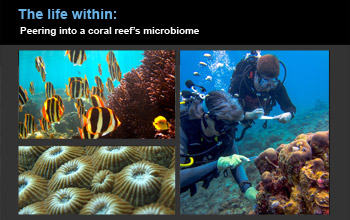 Humans are made up of millions of microbes, collectively called our microbiomes. These microbial “ecosystems” contribute to keeping us healthy.

It’s the same for corals and other species, scientists are finding. Corals’ microbiomes play an important role in reef health. Understanding what lies deep within coral reefs will help us protect these imperiled ecosystems, now under siege by El Niño’s unusually warm waters.

In celebration of Earth Day and to delve into the hidden world of reef microbiomes, the National Science Foundation (NSF) spoke with marine biologist Monica Medina of Penn State University and with Mike Sieracki, program director in NSF’s Division of Ocean Sciences, and Simon Malcomber, program director in NSF’s Division of Environmental Biology. Medina’s research on coral microbiomes is funded by these NSF divisions, through a Dimensions of Biodiversity grant.

1. What is the coral microbiome?

2. Are microbiomes present in coral reefs throughout the seas?

Sieracki: We’ve known for a long time that reef communities are incredibly diverse in their corals, fish and other organisms we can see. Now we’re discovering an enormous microscopic diversity inside corals — their microbiomes — that contributes to reef function throughout the oceans.

3. What can this new research tell us about coral reefs?

Malcomber: It helps us understand the relationship between microbes and reef-building corals, and how each organism is benefiting. It’s also providing important new information on how microbial communities help corals respond to stresses and disease.

4. Is the coral microbiome as diverse as the human microbiome?

Medina: Coral reefs are the most biodiverse marine ecosystems on the planet; this impressive level of diversity extends to their microbial communities as well. It’s difficult to compare diversity between humans (a single species) and corals because when we talk about the coral microbiome we are usually referring to hundreds of coral species. But early studies suggest that corals harbor a far more diverse microbiome than can be found even within the human gut.

5. Studies of the human microbiome have revealed that many bacteria help humans stay healthy. Is this also true for corals?

Medina: Bacteria in the coral microbiome perform functions vital for coral survival. For example, some microbes help corals by fixing nitrogen, which can be a scarce resource on reefs, while others produce antibiotics that ward off potential pathogens. Without their microbiomes, corals could not persist.

6. Are all these microbes beneficial to corals?

Medina: Through our NSF Dimensions of Biodiversity project, we’re working to identify whether there is a shared microbiome across all corals. However, the microbial community in a coral reef is always in flux and is context-dependent, so if a coral is stressed, it will be more prone to harboring pathogenic microbes than healthy coral of the same species.

7. When and how do corals acquire their microbiomes?

Medina: Corals have different reproductive strategies. Some corals brood larvae in their gut before releasing them into the water. The larvae thus acquire their early microbiomes from parent colonies. Other corals release gametes during mass spawning events. Development happens while these gametes are floating in the oceans, leading to microbial colonization by free-living microbes. As these corals settle and grow, they acquire their microbiomes from microbes in sediments and water.

8. Are coral diseases linked with microbes?

Medina: In some cases, microbes have been identified as causative disease agents. In most cases, though, shifts in microbial communities have been described, but the main disease drivers have yet to be determined.

Medina: For decades, research was focused on the coral-algal relationship, and how this symbiosis leads to construction of coral reef structures. But there are gaps in our understanding of nutritional cycles between the two partners. Microbiome research has opened new avenues that shed light on these gaps.

10. Does the coral microbiome change over geographic distances or ocean depths?

Medina: Yes, we know that the diversity of algal symbiont populations within corals changes across large geographic ranges (such as the Great Barrier Reef in Australia or in the Caribbean), and definitely over water depths because corals are light-dependent. Preliminary data suggest that those patterns will also hold true for coral microbiomes.

11. What are some interesting microbes found in corals, and what are they doing?

Medina: We’ve found several microbes that are abundant in corals. We’re using whole genome sequencing to determine the gene contents of these bacteria, and to characterize their metabolic capabilities. We will know more in the near future. The findings will enable us to learn more about the roles of microbes in the maintenance of coral health.

12. How can understanding microbiomes help humans and corals?

Medina: Many treatments in development for diseases such as cancer are derived from the microbes associated with marine invertebrates. That underscores the importance of exploring coral microbiomes. Studying animals with primitive immune systems — but with levels of microbial complexity potentially exceeding those of humans — will enable us to discover the universal organizing principles in microbial communities.

Coral reefs are home to at least 25 percent of all marine species, and have a global annual economic value of at least U.S. $30 billion. By better understanding the functions of coral microbiomes, and assessing how environmental stresses affect them, we will be in a much better position to protect all coral reefs on Earth.