Computers play a crucial role in preserving the Earth 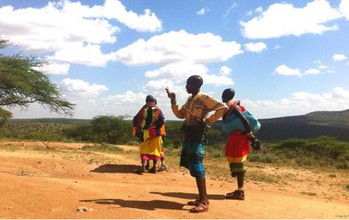 From bears to birds to herders: NSF-funded researchers develop computing methods to cultivate a sustainable environment, economy and society

Computers have helped revolutionize the commercial world and transformed the lives of the general public through the development of the Internet and mobile technologies like the iPhone. But, practically speaking, they have done little for the good of our planet.

This troubled Carla Gomes, a computer science professor at Cornell University, and led her to embark on an effort to develop computational methods that can help cultivate a more sustainable world.

Gomes and an interdisciplinary team of programmers, theorists, applied mathematicians, economists, biologists and environmental scientists have helped create a new field, computational sustainability, addressing challenges that computer scientists have not traditionally handled. Together, they tackle a range of issues from wildlife management to poverty-reduction.

Between 2008 and 2013, Gomes led a large collaborative team that developed fundamental computing tools for sustainability, supported by a $10 million National Science Foundation (NSF) Expeditions in Computing award. The award catalyzes far-reaching research that is motivated by deep scientific questions and has the potential for significant societal benefits.

Using these tools, the team has gone on to solve pressing ecological and economic problems, from protecting endangered animals to helping poor rural herders in Africa, showing the benefit that computing can bring to real-world problems.

However, determining the best approach to design these corridors, which often involves buying or preserving land on a limited budget, can prove tricky.

Gomes and her collaborators developed a modeling technique for wildlife corridors that has proven more effective at allowing animals to traverse contested terrain than previous approaches, often at a fraction of the cost.

The researchers initially implemented the technique in a study of grizzly bear corridors in the Northern Rockies, and later extended its use to include wolverines and lynx across multiple national parks.

“Using our computational approach, we were able to find corridors that improved the movement of species over hand-designed corridors at a substantial fraction of the cost, considering trade-offs for multiple species,” Gomez said.

In 2013, the secretary of the environment of the Quito Municipal District established an ecological corridor and conservation program for the endangered Andean bears in Ecuador’s mountain forests. A research team led by Cornell professor Angela Fuller — a wildlife ecologist and the leader of the New York Cooperative Fish and Wildlife Research Unit who works with Gomez — provides scientific support and applying computational sustainability solutions to expand the ecological corridor there.

The team’s approach has been shown to reduce corridor cost dramatically, allowing often contentious projects to proceed without too much expense and in a manner that helps the animals as much as possible.

“A key advantage of using advanced computational methods in designing wildlife corridors is that such methods enable us to simultaneously optimize dozens of factors, incorporate large amounts of data about the landscape and environment under consideration, and at the same time consider social-economic factors, which is something quite infeasible for corridors designed by hand,” Gomez said.

State of the birds

Citizen scientists provide critical information about bird populations, as part of projects like eBird and the Great Backyard Bird Count. However these amateur ornithologists can lack the accuracy of professionals and their sightings may not be equally dispersed throughout the country, skewing the results.

To address these shortcomings, NSF-funded researchers at the Cornell University Laboratory of Ornithology and other Expeditions in Computing team members have developed new algorithms that can compensate for biases in the distribution and misidentification of citizen scientist birders and assist in accurately determining bird populations for conservation efforts.

They did so, in part, by developing a machine learning system using an active learning feedback loop between humans and machines. The system provides observers with immediate feedback on the accuracy of their observations. This improves the expertise of the observers, while simultaneously refining the quality of the data the machine learning system uses to make decisions. The loop continually augments the effectiveness of the system as a whole.

The Department of the Interior applied these approaches to its 2011 and 2013 “State of the Birds” report, which used high-performance computing techniques to produce the first systematic set of year-round species distributions at the finest spatial resolution to date. The research team is assisting with the forthcoming 2016 report.

Recently, the team implemented a new incentive system called avicaching (akin to geocaching, where people search specific sites for small treasures) in order to gather more observations from under-sampled places. Birders who travel to under-reported locations and identify birds earn points that allow them to enter a drawing for binoculars.

“Since the inception of avicaching in March 2015, 19 percent of the eBird observations in our pilot counties shifted from traditional locations to locations with no previous observations,” Gomes said. “This has enabled scientists to refine their bird distribution models. We’re currently experimenting with additional incentives, as determined by our computational model, to obtain data that is even further removed from traditional observation areas.”

If successful, the team will roll out their avicaching system nationwide.

“It is exciting to see our computational methods help guide human observers, leading to improved data that is then used to refine predictive computational species distribution models,” Gomes said.

The tools and methods that Gomes and her team have developed can help people as well as animals. For many years, the team has explored ways to improve the lives of nomadic herders or pastoralists in Kenya. The pastoralists inhabit a large area of arid and semi-arid lands in East Africa and move frequently to find the grasses needed to sustain their herds.

Gomes and her team first developed a model to simulate the complex movement patterns of herders over a landscape that shows the typical unpredictable dynamics of African dryland ecology.

The models they designed capture the choice processes of herders — how individuals decide where to go and when — which is crucial for policy-making concerning sustainable development.

To augment this information, the researchers developed a mobile phone app called GrazeIt that crowdsources information about vegetation submitted by herders and combines it with information from satellite images to help herders find forage for their animals.

Simple icons displayed on a cell phone allow African pastoralists to report the condition of the vegetation they observe. Tapping an icon can report “no grass,” “some grass” or “a lot of grass.”

“In the first six month, we were able to collect 124,000 surveys of forage conditions from 112 pastoralists-citizen scientists,” Gomes said. “We successfully used a dynamic incentive system in order to induce greater submission rates from undersampled regions, increasing the value of information collected by the project and reducing the number of redundant submissions. In addition, we used new experimental methods for monitoring and training to identify cost effective approaches to improving data quality.”

This is just one example of the many ways in which computer scientists are optimizing limited resources to benefit people across the globe. The work was presented at the 2016 American Association for the Advancement of Science Annual Meeting in February.

Beyond the individual tools and applications developed by the Expeditions in Computing team, the project’s biggest accomplishment may be kickstarting the new field of computational sustainability and inspiring others to dedicate their efforts and expertise to address sustainability questions.

Initial funding from NSF has led to more than $80 million in support from other agencies and organizations, according to Gomes, and has helped stimulate the field. Computational sustainability is now taught at many universities and has its own dedicated research track at several scientific conferences.

In January 2016, NSF announced its support for the next phase of the project — the development of a Computational Sustainability Network — through a second, five-year, $10 million Expeditions in Computing award. The network includes a diverse range of new and continuing partners, from the Nature Conservancy to the Trans-African Hydro-Meteorological Observatory to the National Institute of Standards and Technology.

“Our new NSF Expedition is charged with growing and expanding the horizons of the nascent field of Computational Sustainability,” Gomes said. “Advances in computational sustainability will lead to novel strategies to help herders and farmers in Africa improve their way of life, save endangered species and scale renewables up to meet 21st century energy demand.

“Without this research, inefficiencies in terms of resource use and inaccuracies in data models will literally cost lives and reduce the richness of our natural world, potentially threatening future generations.”