Too much algae — and too many microbes — threaten coral reefs 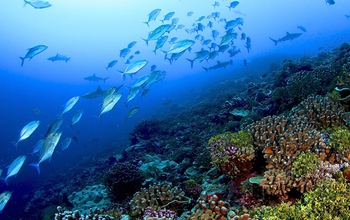 Coral reefs, the world’s most productive and diverse marine ecosystems, rely on a masterful recycling system to stay healthy.

Corals and algae release nutrients that support a complex and efficient reef food chain. But when the system gets out of whack, the cycle breaks down and endangers the reef’s health.

A new study explores how a process called microbialization destroys links in this delicate food chain. The scientists, including Forest Rohwer of San Diego State University (SDSU) and Craig Nelson of the University of Hawaii, published their findings this week in the journal Nature Microbiology.

Millions of people around the world depend on coral reefs for productive fisheries, and reefs play an important role in global environmental health.

Overfishing the waters near coral reefs, however, removes the primary algae-eaters from the environment, allowing populations of fleshy algae to explode. In areas with large human populations, pollution often exacerbates the problem by stimulating these algae.

Fleshy algae on reefs release copious amounts of nutrients known as dissolved organic carbon, which microbes eat. The researchers theorized that when increased levels of algae produce meals for microbes, there are also higher levels of potentially harmful microbes throughout the reef ecosystem.

These microbes then endanger corals by depleting oxygen from the environment or by introducing diseases. As the corals die off, the algae have even more space to take over, leading to further coral mortality.

When reefs are dominated by fleshy algae, “most of the energy in the ecosystem goes to the microbes,” said the study’s lead author, Andreas Haas, a biologist at SDSU. “It doesn’t support the variety of reef organisms that make up a healthy system.”

Haas and co-author Mohamed Fairoz, of the Ocean University of Sri Lanka, collected more than 400 water samples from 60 coral reef sites across the Indian, Pacific and Atlantic Oceans.

Back in the laboratory, they tested these samples for evidence of microbialization of algae-dominated reefs, looking for more microbes with more potential to harm reef organisms.

They analyzed the abundance of microbes throughout the samples and found that reef sites with more algae had more harmful pathogens, or disease-causing microbes.

The study’s results, the scientists say, support the idea that microbialization linked with increasing algae on coral reefs can decimate the reef ecosystem through microbial takeover.