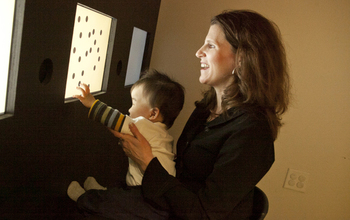 Researchers show humans and other animals can understand quantities, even without language

Symbols don’t always have to be part of the equation to understand math, according to cognitive neuroscientist Elizabeth Brannon.

Brannon started her research studying monkeys to understand how non-human animals think about numbers, and whether they can perform basic arithmetic tasks. She now studies human infants at her University of Pennsylvania lab, looking to see how they learn math skills and number systems before they can even speak.

Her research provides a more complete view of what scientists call the “approximate number system,” the ability of humans and many other animals — from monkeys and dogs to crows and guppies — to understand magnitude without language or symbols. For example, a 2-year-old is unable to accurately count a set of eight M&Ms, but she is able to appreciate that eight M&Ms are more than three M&Ms.

As schools, community organizations and other groups celebrate Mathematics Awareness Month with math-themed activities, research like Brannon’s explores the roots of mathematics in human development.

Over the past two decades, Brannon and colleagues have shown that rhesus monkeys can not only understand the numerical concepts of “more than” and “less than,” but they also add and subtract.

“I came to this work with an interest in understanding how and if animals other than humans are capable of abstract thought,” Brannon said. “Numbers are a great test case for this kind of question because numerical sets are about as abstract as you can get.”

Researchers trained the monkeys to respond to images of dots on a video screen. When the monkeys make the correct selections, they get a squirt of apple juice or Kool-Aid as a reward. Through these experiments, the monkeys demonstrated the ability to put both increasing and decreasing sets of dots in order.

They also correctly identified the results when two sets of dots were added or one was subtracted.

Recent work has shown that the monkeys can do more than add dots. They can also keep track of the number of tones they hear, and even match sights and sounds based on those numbers. Brannon and Jessica Cantlon, of the University of Rochester, tested the monkeys’ addition skills against college students. The college students proved more accurate, especially for harder problems, but the monkeys answered the easy ones quite a bit faster.

Throughout the experiments, the monkeys performed better either when dealing with small groups of dots or when comparing sets with substantial differences. The same is true for humans. They showed that determining that six is more than four is easier than determining that 12 is more than 10.

“What we are seeing in the monkeys is essentially the same process with the same rules as what we see in humans, both adults and babies,” Brannon said. “This teaches us something fundamental about what it means to be human, that an ability to understand abstract thought may not be what separates us from animals.”

Young children and babies can gauge orders of magnitude well before they can count.

Cognitive development research involving infants relies heavily on the amount of time an infant looks at something to gain insight into what interests them. Researchers compare the amount of time babies look at two different displays on a video screen to infer what infants expect or understand about their environment.

Brannon and her colleagues use this technique to explore what infants understand about numbers. For example, the researchers might show an infant several sets of six dots in different configurations on the screen until the infant becomes “habituated” or, essentially, bored and starts to look away more quickly. If the researchers then change the number of dots to 12 and the infant looks longer, that shows the baby discerns that six and 12 are different, even if they can’t identify the exact numbers involved.

“It wasn’t that long ago that people thought of babies as unreactive sponges, absorbing the world around them but not thinking much about it. We now know that even without language they are quite capable of abstract thought and assessment,” Brannon said.

Understanding the ways in which abstract thought can affect overall math proficiency remains area of active research for Brannon’s lab. Brannon, Ariel Starr of Duke University and Melissa Libertus of the University of Pittsburgh have shown that a 6-month-old’s proficiency in this area can predict the child’s score on standardized math tests 2 1/2 years later.

“This is a new direction in our research that I am very excited about,” Brannon said. “If approximate number system skills are predictive of future math skills — which they appear to be — and we can teach these skills — which we have shown is possible in college students — then there is potential to make an impact improving math skills overall.”

In addition to work with infants, they work with children between ages 3 and 10 in the lab to understand what is going on in the brain as children process different types of math questions. They are also working with schools to develop and test a video game geared toward increasing skill in navigating the approximate number system.