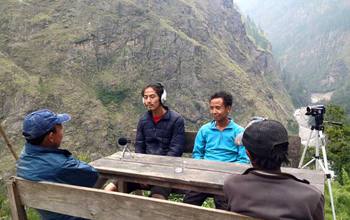 The April 2015 Nepal earthquakes caused massive damage. Aid organizations responded to flattened villages, medical emergencies, and food and water shortages. But the 7.8 magnitude quake and aftershocks also traumatized and disrupted the country’s cultures and communities. These elements are harder to see, but play an important role in disaster recovery.

A team of linguists and anthropologists, supported by the National Science Foundation (NSF) Social, Behavioral, and Economic Sciences Directorate, is collaborating with local researchers in three mountain districts in central Nepal to see how people from these areas understood the earthquakes, how they’re rebuilding and how they relate to the lingering threat of extreme environmental disasters.

“We are witnessing how and to what ends people are making choices about rebuilding, and we are also learning very important lessons about the different ways that health and wellbeing — including mental health issues — are articulated in the wake of such an event,” said Geoff Childs, a cultural anthropologist on the faculty of Washington University in St. Louis and a researcher on this project.

Languages under threat of extinction

Nepal, the home of Mount Everest, is a poor, landlocked, mountainous nation that relies heavily on remittances from citizens who work abroad. Its economy also depends on tourism, especially in the Kathmandu Valley, a UNESCO World Heritage Site.

The earthquakes wiped out roads and damaged or destroyed monuments and other sites of rich cultural heritage. Nepal’s government and international aid agencies are working to recover after the physical damage, but the diverse languages of Nepal — especially the minority and endangered ones — may not all survive that process.

Between 100 and 115 distinct languages are spoken within Nepal’s borders. The three districts where the NSF-supported team is working all feature languages, and cultures, under threat of extinction, a situation the quakes exacerbated. Natural disasters can destabilize the linguistic landscape and diversity of an area. Nepal’s earthquake displaced entire populations, and some people may never return to their home villages, just as many residents of New Orleans resettled elsewhere after Hurricane Katrina. That means language can provide researchers with a window into the cultural impacts of these extreme events.

Thus far, the researchers have collected interviews and stories in 11 different Nepalese languages documenting local understanding of the disaster. That information not only provides a rich source of data on the languages themselves, it also helps researchers understand what locals do when a tragedy strikes and why — providing insight that can help policymakers prepare local populations for the next emergency.

“In addition to getting different sociocultural perspectives on questions of causality, we are also revealing knowledge and gaps in knowledge about how and why natural disasters occur from a scientific perspective,” said medical anthropologist Sienna Craig, of Dartmouth College. “What do villagers in Nepal seem to not know that they should about protecting themselves?”

The lens of culture

One issue that can have a profound effect on how people act during an earthquake is the reason they believe it’s happening, according to the researchers. Linguist Kristine Hildebrandt of Southern Illinois University Edwardsville reports that the people with whom the researchers spoke invoked a rich range of causal and cosmological reasons for the quake.

The local people believe earthquakes happen “when things fall out of balance,” Hildebrandt said. “Earthquakes are viewed as karmic payback for too much modernizing or for sin or for taking economic assistance from China.”

These belief systems endanger people’s lives when they lead to unsafe, even fatal, reactions during earthquakes. Understanding these factors can improve local preparations before disaster strikes and can better inform disaster response practices.

The linguistic studies also shed light on how some languages communicate space and motion completely differently than others. English speakers, for example, take directions like “up” and “across,” spatial relationships like “between,” and motion verbs like “walk,” “run” and “saunter,” and encode them into separate words.

Not all languages use that same approach. While researchers have data from Sino-Tibetan languages — a family of languages spoken in East Asia, Southeast Asia and South Asia — the approaches used in many Himalayan languages, including those spoken in Nepal, remain virtually unknown.

“When people talk about first experiencing the earthquake, they go outside and watch landslides happening. They themselves are falling, and things fall over,” Hildebrandt said. “That’s motion. That’s space.”

Collecting data that would show how those languages incorporate such concepts can prove challenging to collect in a natural way, such as by simply asking questions. Researchers therefore may use props or other techniques to elicit the information they need.

The resulting narratives and conversations constitute a rich source of data on the ways endangered languages communicate spatial relationships and motion. This work serves the dual purpose of building the researchers’ understanding of the languages themselves, and helping to provide clues about ways to effectively communicate about earthquake risk and response.

The types of issues the researchers are studying — how the lens of culture affects the way people view disasters, and the effects those catastrophes can have on culture and language — stretch beyond Nepal. Japan and Ecuador are currently recovering from major earthquakes that resulted in loss of life and created significant societal disruption.

The damage to infrastructure in those nations, and in Nepal, is visible. The trauma to the health and wellbeing of survivors is not — but it’s also important, and those social and behavioral factors can influence how quickly and effectively a community repairs its more tangible, physical harms. That makes the work this research team is doing by collecting real-time data on people’s resilience crucial. The insights they generate can help lead to disaster recovery that saves time, money — and, ultimately, lives.

#1547377 RAPID: Narrating Disaster: Calibrating Causality and Responses to the 2015 Earthquakes in Nepal