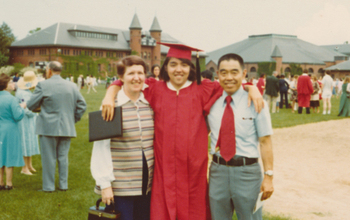 People with diverse backgrounds are critical to the cultivation of new ideas in science and engineering. In celebration of Asian Pacific American Heritage Month, three National Science Foundation (NSF) leaders reflect on how their heritage enriches their research and inspires their work.

I was born and raised in the U.S., but my Japanese heritage has always been close to me. My grandfather on my father’s side immigrated to the U.S. in the early 20th century and placed tremendous emphasis on education, which both of my parents (my dad was a chemical engineer; my mom was a chemist) passed on to me and my family.

My dad’s experiences — being uprooted from his senior year in high school into a Japanese-American internment camp during World War II, from there volunteering and serving in the U.S. Army, and then attending grad school at Columbia University under the GI Bill — has had a profound impact on my views of the tremendous impact that government can have on people’s lives.

I’m so proud to be serving in the government at NSF.

As a computer scientist, I’ve collaborated with researchers from Japan, India and other Asian-Pacific countries and have particularly enjoyed international research collaborations throughout my career. The CISE Directorate has had a number of collaborative research programs with both Japan and India — several are ongoing now and more are under discussion. Science, engineering and education are truly global endeavors. We’re all global citizens, and NSF’s many international programs are incredibly important for our country.

I was born and raised in India. My early childhood was in a small village where our home did not have electricity and running water. As I was completing my undergraduate studies in electrical engineering, I was reading some research papers by Professor R. E. Kalman on his pioneering work in control and estimation theory and mathematical systems theory. I wrote him a letter seeking to study for a Ph.D. under his guidance and support. He replied with a positive response and that changed the course of my life, eventually leading to becoming a U.S. citizen.

In my work at NSF as assistant director, I am deeply influenced by the value of higher education and research and the tremendous potential of science and engineering to benefit people and society. I place great importance on access to higher education in STEM fields by people from all sectors of society regardless of their backgrounds. I am greatly inspired by the NSF mission to enable fundamental research in science and engineering. I am very confident the resulting discoveries will be tremendously valuable to the future of our nation and the world.

I am a third generation Asian-American from California and was raised in what I considered to be a mixed marriage. My mother was also a Japanese-American from Southern California, but my father, although born in the U.S., was raised in Japan. My parents met and married in one of the internment camps. They were never bitter about the experience, but it did have a profound impact on my upbringing. For example, my mother never wanted me to learn to speak or write Japanese. In her words: “We were placed in the camps since we were told that we were different. I never want my children to be told the same thing.”

Both of my parents were supportive of my interest in science, although it was clear they would have preferred that I attended business, medical or law school. I have pursued a path that began as a university professor, continued at National Center for Atmospheric Research, and now has culminated with my time at NSF working in GEO. Writing this article has reminded me of the wonderful time I have had performing and supporting basic research and the special honor it has been working at NSF.

I often say that GEO supports most of geosciences research in the university community that both protects and maintains the health of the planet (not just the U.S.) that we live on. It is an enormous responsibility, but also a special opportunity that makes coming to work enjoyable and rewarding.

NSF is proud to support the careers of scientists and engineers who advance fundamental research that enhances our nation’s security, drives the U.S. economy and increases our knowledge to sustain global leadership.