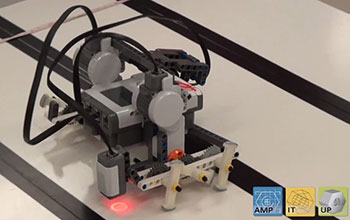 If you’re a researcher doing cutting-edge work to improve teaching and bring more people into science, technology, engineering and mathematics (STEM) learning, how can you let people know about the progress you’ve made?

One answer is to let them see for themselves. And the Videohall.com platform allows researchers supported by the National Science Foundation (NSF) to do just that.

For two years, the platform has hosted an NSF video showcase, allowing hundreds of researchers to feature their work in three-minute videos. This year’s showcase, “Advancing STEM Learning for All: Sharing Cutting-Edge Work and Community Discourse,” featured 156 short films, on topics ranging from robots in classrooms to STEM research and education that occur in U.S. national parks.

“The showcase provides a broad overview of innovative projects to improve STEM and computer science education across the country,” said Joni Falk, the project’s organizer and co-director of the Center for School Reform at the STEM-focused education research nonprofit TERC. “Through video sharing, discourse, and social media, thousands of educators and researchers engage in an interactive experience, discussing the videos, exchanging ideas, and exploring the impact of the projects on STEM learning.”

But the showcase — itself NSF-supported — does more than feature videos. For seven days in May, it allowed members of the public to participate in digital conversations with the researchers who made the films and vote for their favorites. Videos with titles like “Making is Fun, But Are They Learning,” and “Robotics and Girls’ Internalized Stereotypes” sparked lively Q&A sessions. The showcase also concluded by naming three categories of recognized videos:

Taken individually, the videos describe interesting projects. Taken collectively, however, they paint a broader picture of the education research community.

“You don’t just watch one, you watch a series of videos and you get a larger sense of the cool research that is going on,” said Christine Cunningham, vice president of research at the Boston Museum of Science, in one showcase clip. Cunningham’s 2015 and 2016 showcase entries were both recognized.

Presenters also say the showcase allows them to reach a broad audience of teachers, students and policymakers. “One real-world consequence was that we were able to enlist support that we did not even know existed,” said Professor Michel DeGraff of the MIT-Haiti Initiative, who presented a video in 2015.

The time to vote has passed, but you can still watch the videos and see NSF-supported STEM education work in action.