Supervolcanoes like Yellowstone may have been more active in the past 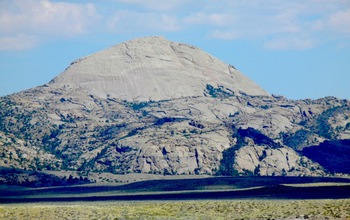 Geologists go ‘back to the past’

Geophysical monitoring of the ground above active supervolcanoes, like the one located in Yellowstone National Park, shows that it rises and falls as magma moves beneath the surface of the Earth.

Magma located under areas that include the Yellowstone region and the western margin of North and South America can erupt violently, spewing vast quantities of ash into the air, followed by slower flows of glassy, viscous magma.

But what do these subterranean magma chambers look like, and where does the magma originate? Modern, active volcanoes cannot answer those questions, scientists say.

Back to the past

Instead, a new study by University of Wyoming researchers suggests scientists can go back to the past to study present-day solidified magma chambers where the erosion has removed overlying rock, exposing granite underpinnings.

The study, funded by the National Science Foundation (NSF), and its findings are outlined in a paper published in the June issue of American Mineralogist, the journal of the Mineralogical Society of America.

“Every geology student is taught that the present is the key to the past,” says geologist Carol Frost, director of NSF’s Division of Earth Sciences, on leave from the University of Wyoming. “In this study, we used the record from the past to understand what’s happening in modern magma chambers.”

Secrets in a batholith

One such large granite body, the 2.62 billion-year-old Wyoming batholith, extends more than 125 miles across central Wyoming.

University of Wyoming earth scientist Davin Bagdonas traversed the Granite, Shirley and Laramie Mountains to examine the batholith. He found remarkable uniformity, with similar minerals throughout.

Says Bagdonas, who worked on the project with Frost, “only minor variations were observed in granite near the roof and margins.”

That homogeneity, or sameness, indicates the crystallizing magma was well-mixed. However, more subtle variations across the batholith show that the magma formed by the melting of multiple rock sources that rose through several conduits.

Large bodies composed of biotite granite, such as the Wyoming batholith, are more common in the Neoarchean era (2.8 billion-2.5 billion years ago) than in younger terrains. The reason may relate to higher radioactive heat production in the past, which provided power to drive extensive granite formation.

“If these ancient rocks are analogs for the magma systems underlying modern supervolcanoes, then explosive volcanism may have been far more abundant in Earth’s past than it is today,” the researchers conclude in their paper.