Service robots are coming to help us 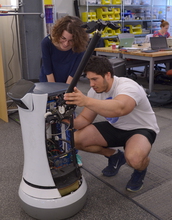 In the not so distant future, robots could help us do everyday tasks like fetching the remote, offering a helping hand to walk us from room to room, or carrying our food or water when our hands are full. Some researchers say that robots will be in our homes, hospitals and eldercare facilities in the next decade.

Industry and university partnerships through the National Science Foundation (NSF) Partnerships for Innovation: Building Innovation Capacity (PFI:BIC) program are working to advance, adapt and integrate technologies like robots into human-centered smart service systems. The program gives scientists the opportunity to partner with industry to test their lab-created technologies in everyday settings, and learn from the interaction of humans and technology.

Since 2014, the NSF has invested in 21 three-year, $700,000 to $1 million projects involving smart service systems. Those investments support innovative new partnerships that advance novel technologies. (An additional 11 awards will be made this summer).

“The PFI:BIC program brings us in close partnership with nurse scientists and industrial systems integrators,” said Dan Popa of the University of Louisville, principal investigator on a PFI:BIC project.

As a result of those partnerships, Popa said, “Our research is channeled from the start of the project to challenges relevant to nursing environments, including patient and nurse preferences, tasks in which they require help from the robot, and so on. We believe our research will lead to robotic solutions that are better conceived and may be commercialized because they solve a market need, and consider manufacturing and operational constraints from conceptualization.”

Popa has partnered with Texas Health Resources, the University of Texas at Arlington and defense contractors RE2 Robotics and QinetiQ North America to design a robot that could navigate hospital rooms.

The team is adding new sensors and controllers to robots that were once used in Iraq and Afghanistan to disassemble improvised explosive devices (IEDs) to “make them more intelligent for use around people.” Once updated, these robots will become an Adaptive Robotic Nursing Assistant (ARNA) that will assist nurses — not replace them, Popa stressed.

“Robots can perform certain tasks with precision while humans can make more complex decisions and actions,” she said.

A path to commercialization

“We are looking at applications and future commercialization. The economic motivator is very significant,” said Popa, who would like to see at least one Adaptive Robotic Nursing Assistant in every hospital and in homes. “If the cost is low enough, imagine in five to ten years, going to Sears and getting one for your house and your parents?”

The first iteration of the robotic nursing assistant will be a “patient sitter,” located in the same room as a long-term care patient. It would fetch items, visually monitor the patient, check vitals, alert the nurse if a patient gets out of bed, or read to the patient. The second application would consist of a “patient walker” that would walk with the patient, assess the risk of falls during the walk, push an IV pole or a wheelchair, and guide a patient to a desired location.

The walker robot will not come preprogrammed. Instead, it will adapt to the specific needs of the patient and be able to tell if a patient was strong or weak and adjust to his or her specific needs. The robot will also have “skin” with pressure sensors and a rubber-like texture, making it safe for contact with human skin and able to lessen the chance of tears, cuts and pinch points.

Right now, two nurse scientists advise the team on requirements. The team will test and design a new model of the robot this year and build the next version in 2017 in Louisville. In 2018, they will begin testing in Texas Health hospitals.

Another PFI: BIC project gives researchers from the University of Pennsylvania the opportunity to test how robots interact with older Americans in nursing homes, allowing them to gauge whether the machines have commercial potential.

“The only way robots can be commercially viable is if they serve a real need in an appropriate manner,” said Mark Yim, an engineering professor at the University of Pennsylvania and principal investigator on the project. “Without NSF and PFI, this particular team would not have gotten together. Having the real context of working with elders in the eldercare facility is critical to getting the robot design to be effective.”

Yim works with the University of Pennsylvania (School of Engineering and Applied Science, the School of Medicine and the School of Nursing) and Savioke (a California-based company that is creating robots for the hotel industry), along with two elder care sites in Philadelphia: the Mercy Douglas Residences and Living Independently For Elders (LIFE).

The project consists of two phases: First, the development of a low-cost robot capable of a limited set of manipulation tasks to help older people, such as picking up dropped items or filling a water glass. And second, the development of a data-driven service system that analyzes the use of the robot over time to monitor elder health via service requests and proactively offer assistance as needed.

The team uses “Relay,” a 3-foot tall, cylindrical robot made by research partner Savioke, as its base. Savioke has used Relay to make light deliveries in hotels to guests and will provide the robot with an arm and gripper to help people with tasks such as turning on a faucet or retrieving an item from the floor or cabinet, Yim said.

“On one level, we will gain knowledge about the design of service robots, both hardware and software, that can perform a limited set of manipulation tasks on elders’ behalf,” Yim said. “At a macro level, the information gathered by these robots and how elders use them during field use will help us learn how robots can help create a larger data-driven health monitoring system.”

Yim said the team is still developing its health monitoring system, but he pointed to robots testing hydration as a possible example of how robots can help older people gauge the amount of liquids they need and deliver water at specific intervals.

“I think robotics is going to have a huge impact on elderly care in the future,” Yim said. “The question still remains what form of impact this will be — whether freeing people to do more human-human care or more direct robot-human care.”