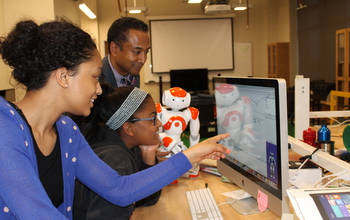 Survey after survey has shown a lack of women engaged in science, technology, engineering and mathematics (STEM) fields. It’s an utterly human problem, but one group of eighth-grade girls recently experimented with a way to address at least one aspect of it — with robots.

The students, participating in a program funded by the National Science Foundation (NSF) called Co-Robots for CompuGirls, programmed a pair of two-foot, identical humanoid “Nao” robot avatars to help with the process of interviewing for a STEM position. The robots could converse, but the “interviewer” couldn’t see the “applicant,” removing factors like sex and race from the interaction.

Those are the kinds of issues Co-Robots for CompuGirls wants its students to think about — not just the programming that goes into robots but the potential social benefits that researchers could achieve with intelligent machines that work cooperatively with people, known as co-robots.

“They came up with that by themselves as a humanoid robot solution to a social issue,” said Marquette University computer engineering professor Andrew Williams. Williams directs Marquette’s Humanoid Engineering and Intelligent Robotics (HEIR) Lab, which specializes in researching and developing social robots to help kids with STEM education.

Aside from getting students to think about social issues, Co-Robots for CompuGirls also aims to address one: increasing the representation of girls in robotics education.

Through the National Robotics Initiative, a multi-agency effort led by NSF, Williams saw an opportunity to collaborate with Arizona State University social scientist Kimberly Scott, who began receiving NSF support for the CompuGirls program in 2007. That collaborative effort, Co-Robots for CompuGirls, allows researchers to bring culturally responsive humanoid robotics education to underrepresented girls. Williams says he hopes to expand the project to other girls’ organizations that focus on STEM, such as Girl Scouts or Black Girls Code.

Prior to coming to Marquette, Williams taught at Spelman College, a historically black women’s school, and was involved with its SpelBots Robotics Team, an outreach program. He says Co-Robots for CompuGirls’ mission has personal meaning for the researchers involved.

“I have two daughters,” he said. “And I see how, in our educational system, a lot of the time girls don’t see themselves becoming engineers or computer scientists or working with robotics.”

The program seeks to develop a curriculum schools could put into widespread use, helping middle-school-aged girls envision themselves using technology to help society. So far, the project has reached out through programs in Arizona, Colorado and Wisconsin, with one- or five-week workshops that teach girls how to program humanoid robots using the visual programming environment Choreographe and the programming language Python.

Other institutions have already begun requesting Co-Robots for CompuGirls’ curriculum, and Williams said the team is working to vet the research showing its effectiveness and build in teacher preparation materials before undertaking that sort of distribution.

Williams is also working on another project aimed at solving a basic access issue for institutions that want to include robotics instruction: cost. With the support of an NSF Innovation Corps (I-Corps) award, he’s developing a prototype for a new, low-cost social robot that allows children to interact with its “brain” through a tablet computer.

Lowering the cost of access and finding ways to teach girls not only programming, but topics like ethics and social responsibility — which look to become increasingly important as co-robots integrate into communities — can help create a better, more representative, robotics workforce, Williams says.

“Underrepresented groups and women need to be able to see themselves as potential creators of technology, not just users, and see themselves as using technology to positively affect society,” he said. “We want to prepare the next generation to be technical leaders as well as policy leaders.”