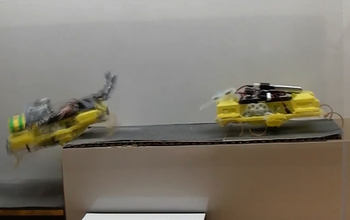 Biological inspiration for robot locomotion, control and design may save lives in disasters

Insects make themselves at home in the most unwelcoming terrain: on steep inclines, in dark crevices, under shaky rubble.

While their ability to go just about anywhere can be disturbing at times, electrical engineer Ronald Fearing sees their talent as inspiration for a special breed of robots that can fit in your hand and help in emergency situations.

“Living in earthquake country in California,” Fearing says, “it’s frustrating to know people will be trapped after a building collapse. We have an indeterminate amount of time to find someone before they may die. Small robots would allow us to get in and communicate fairly quickly.”

Since the 1990s, Fearing has been developing biomimetic robots capable of remarkable feats of speed and maneuverability. With his team at the University of California, Berkeley, he designs robots to share traits with insects, lizards and other animals.

With NSF funding through the National Robotics Initiative (NRI), Fearing now creates biologically inspired teams of robots that can cover rough ground while sending information to and receiving guidance from search and rescue personnel.

“The NRI project allows us to see how robots can do something useful, with robots working together and with people as well,” Fearing says.

Quick as a cockroach

The indomitable cockroach serves as one insect model for his group’s designs. Fearing and his colleagues made a series of robots about 3-10 centimeters long (roughly 1-4 inches) that move like the common cockroach Periplaneta Americana, sharing its gait stride frequency and other dynamics.

To create the miniRoACH (RObotic Autonomous Crawling Hexapod), Fearing and graduate students Aaron Hoover and Erik Steltz invented using the smart composite microstructure (SCM) process. SCM is a rapid prototyping method in which rigid structure and movable joints are laser cut from a single sheet of material and then folded into position. Using this method, designers can create complicated machines, such as robots, quickly and inexpensively. (Watch construction of a robot using SCM.)

The 3 cm miniRoACH, is slow. Fearing and graduate student Duncan Haldane, with fellow students Fernando Garcia Bermudez and Kevin Peterson, adapted the movement of the original RoACH for the larger VelociRoACH, a 10 cm robot that can run almost 3 meters per second (approximately 6 mph).

The VelociRoACH research was made possible by an NSF Integrative Graduate Education and Research Traineeship (IGERT) award to teach biology and engineering students to learn from natural design.

To allow another model, the X2-VelociRoACH, to go faster than nature’s design, Fearing and Haldane added a bigger motor and more power to increase stride frequency. In 2015, the little robot reached speeds up to 5 meters per second (approximately 11 mph), making it the fastest legged robot relative to its size. (Watch the X2-VelociRoACH zoom by.)

Having mastered fast movement in flat, open environments, the researchers’ current challenge involves locomotion in tough environments with little open space, obstacles everywhere and no clear paths through. The robots need to explore in order to reach their destinations.

Typical rescue robots are designed for particular terrain, require costly motors and joints, and are much larger and heavier (weighing several kilograms rather than the 50 grams of VelociRoACH). Fearing and his collaborators use less complicated, more versatile designs for robots that work together. One key question guides that focus on adaptability and robotic cooperation: What if robots encounter an obstacle they’ve never seen before?

“If you think about people, if you send a single person to explore and they encounter a 12-foot high fence, they are stuck,” Fearing says. “But if you send two people, the first can boost the second one up, and then the second can pull the first one up.”

Fearing and his team study strategies that teams of robots can use to overcome a variety of obstacles. Ants provided some inspiration, as they often collaborate (for example, by stepping on each other) to get where they need to go.

Together with graduate student Carlos Casarez, Fearing recently tested a strategy for robots that aren’t specifically designed to climb or step over obstacles. The researchers outfitted two VelociRoACH robots with radios, leg-position sensors, gyroscopes and accelerometers to help them orient themselves. They also gave the VelociRoACHes a small tether and winch system, giving them the ability to latch onto and pull one another. The team then investigated how “motion primitives” — simple, combinable actions — could allow the VelociRoACHes to mount a step together.

Like small words arranged to create entire sentences, motion primitives can be combined to accomplish a variety of tasks. The researchers demonstrated that with the right primitives, arranged in the right order, the robot team could cooperate to reach the top of a step, then disconnect and continue exploring separately. (Watch the robots cooperate.)

Over the next year, Fearing and his team will test instructions for robots to push, pull, twist and execute other cooperative movements. With a portfolio of locomotion strategies and some quick analysis of their surroundings, simple, reconfigurable and inexpensive robots can collaborate to overcome obstacles in a variety of terrains.

Deploying tens or hundreds of small robots at a time means that they can quickly cover a large search area. According to Fearing, “From a cost point of view, simple robots are $10 to $100 each instead of $1,000 each.”

VelociRoACHes come at a low cost low because of the SCM manufacturing process — they come from at single flat sheet that is cut and folded, rather than being built from hundreds of individual components. The robots can also incorporate many inexpensive, off-the-shelf technologies.

“Each robot is about the size of a cell phone,” Fearing says, “So whatever you can put in a cell phone can go in the robot.”

When you set 50 or 100 little robots loose to explore, you (or even your team) can’t possibly control each individually. Instead, humans give general directions, and the robots coordinate with each other via radio.

A bigger robot with more computing power can monitor smaller robots. By combining each small robot’s data (for example, input from CO2, thermal, and laser-based distance sensors), a “mother ship” robot will understand the location of each robot and its environment.

With the ability to navigate rough terrain and chart their surroundings, the robots could become useful partners to people after disasters or in other dangerous situations.

First responders, such as Fearing’s collaborator California Task Force 3 Urban Search and Rescue, will be able to guide the robots through collapsed buildings to locate people. Fearing seeks to develop a backpack filled with a complete set of robots and a tablet interface that first responders can easily carry and use at the scene of an emergency.

For the past five years, Fearing has investigated ways for collaborative robots to achieve dexterous locomotion, a major challenge for robotics. During the next five, he plans to explore analogies to dexterous manipulations, such as putting a cap on a pen with one hand.

“Can we treat these robots as small fingers? For example, if a robot is stuck in a hole, several other robots could act as fingers and pull it out,” Fearing says.

As they become more dexterous, independent and useful, robots are also likely to become more embedded in people’s lives, he says. “The combination of all these individual pieces developed already — perception, control and design — will allow robots to be as capable and smart as animals, approaching the ability of companion animals. Robots will not just be in the factory but in the everyday human environment.”

Fearing said that means robots could one day clean, cook and perform other chores at home. And they could potentially get better at those jobs through the collective experience of other robots connected through the Internet of Thing. They will also be good for doing the jobs that humans can’t, such as search and rescue missions and other tasks that involve dangerous terrain.

“When it’s dirty and dangerous, it’s good to use small, disposable mobile robots,” he says.