Atmospheric scientists boldly go into the heart of a tornado 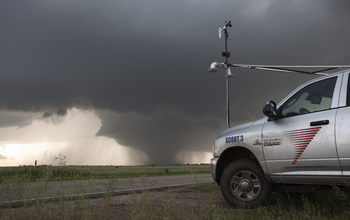 It was the afternoon of May 9, dead center in Tornado Alley: Oklahoma. Severe thunderstorms were forecast for the southern part of the state.

That was the “go” call for atmospheric scientists Josh Wurman and Karen Kosiba of the Center for Severe Weather Research (CSWR) in Boulder, Colorado. Wurman and Kosiba were at the start of a project called TWIRL: Tornadic Winds: In-situ and Radar observations at Low levels, funded by the National Science Foundation (NSF).

TWIRL’s field season ran from May 1 through June 15. That’s the time of year when two ingredients required for tornadoes — very unstable air and strong vertical wind shear — are most common.

The TWIRL scientists are developing 3-D maps of the strongest tornado winds near the ground, and studying how these winds cause damage to buildings, power lines, trees — and anything else in their way.

“TWIRL researchers are focusing on low-level winds flowing into the cores of tornadoes,” said Ed Bensman, program director in NSF’s Division of Atmospheric and Geospace Sciences, which funds TWIRL. “They’re using a combination of surface weather sensors placed ahead of developing storms, and Doppler-on-Wheels [DOW] mobile weather radars. From TWIRL, we will gain a better understanding of the role low-level winds play in the development of tornadoes, and why some tornadoes become the most violent.”

To peer into the heart of a tornado, TWIRL researchers — nomads of science — traveled more than 16,000 miles this spring across the Great Plains, from Texas to the Dakotas, Montana to the Mississippi River, chasing thunderstorms that produce tornadoes.

Tornado on the way

On May 9, TWIRL’s fleet of instrument-laden DOW trucks was split between two towns in Oklahoma, Sulphur and Wynnewood. The DOWs sought out vantage points ahead of a developing storm. Deployed less than a mile from a rapidly forming tornado, they scanned every seven seconds and measured details of the storm as low as 30 feet above the ground.

A DOW looks more like the dish of a radio telescope mounted on the back of a flat-bed truck than a sophisticated weather instrument. With a DOW onboard, the truck becomes an odd configuration of generator, equipment and operator cabin.

Ungainly as it may appear, Wurman says, it’s ideally suited to providing detailed information on the inner workings of tornadoes and other storms such as hurricanes and blizzards.

Wurman should know. He and colleagues developed the first DOW, now one of several, in 1995. The DOW uses Doppler radar to collect velocity data about objects (such as tornadoes and other severe storms) at a distance.

The stories a DOW could tell. Like the time one measured a world-record wind speed of 301 miles per hour just above ground level in an Oklahoma tornado. Or when a DOW was the only “scientific team” to successfully brave Hurricane Ike’s knock-down winds in Galveston, Texas.

Tornadoes usually occur in association with particular types of severe storms, such as supercells and squall lines. But not all such storms form tornadoes. Tornadogenesis, as the formation of tornadoes is called, remains the “holy grail” of tornado research, Wakimoto said. “TWIRL will improve our understanding of tornadogenesis and tornado evolution.”

On May 9, the TWIRL DOWs and tornado pod vehicles suddenly scrambled to get as close as possible — safely — to a supercell thunderstorm. A tornado had formed in nearby Katie, Oklahoma.

The DOWs and Pods were placed directly in the tornado’s path, but the storm fizzled out. The TWIRL team, however, was far from done for the day.

Another, still larger, tornado had formed near Joy, Oklahoma. The TWIRL researchers again worked to get out in front.

“The second tornado was huge,” Wurman said. “It created a damage swath more than a mile wide.” Getting ahead of it meant driving through the core of the supercell thunderstorm, watching warily with the DOWs for any deviation in the tornado’s path.

After minutes that seemed like hours of pummeling by wind-driven hail, the TWIRL researchers and vehicles were safely east of the huge, wedge-shaped vortex. One crew quickly dropped a pod in the path of the tornado, then dashed to safety. Pods, says Wurman, “get run over by tornadoes. Their job is to measure winds three feet above the ground.”

Into a tornado’s heart

DOW7 was parked just north of the tornado’s predicted path, while its crew coordinated the deployment of the other DOWs.

Data from DOW7 revealed winds of more than 224 miles per hour and a dangerous multiple-vortex structure. A pod recorded winds of 100 miles per hour at the edge of the tornado; one of its anemometers was destroyed by airborne debris. The TWIRL scientists could see buildings flying apart.

The crew in SCOUT-3, a customized pickup truck, drove south in front of the tornado, sampling an intense downdraft with winds at 100 miles per hour. “Power lines, trees and weaker structures were all destroyed,” Kosiba says.

On days like May 9, Wurman and Kosiba constantly balance a desire for instrument deployments that will collect new and important data from inside tornadoes, with the critical requirement to keep the TWIRL research team safe.

“We hope to discover new information about which storms are most likely to have violent tornadoes,” Wurman says. “Our ultimate aim is to protect not only TWIRL teams, but everything and everyone in these tornadoes’ paths.”

The Center for Severe Weather Research