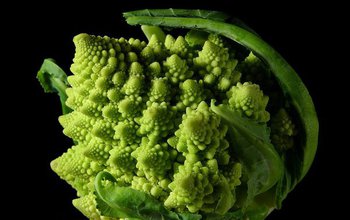 When Harry Potter first went to Hogwarts, he caught his train from Kings Cross, platform 9¾.

The idea of a platform between two whole numbers might seem impossible to imagine. However, for someone working with fractals in math, the challenge is not so different. Fractals are used to measure things between dimensions, as in something that’s more than 2D, but not quite 3D.

Additionally, fractals in mathematics serve as visual representations of “self-similarity,” or patterns that repeat to infinity. This kind of information allows them to sort out new ways to efficiently compress data files or narrow down forecasts for “wiggly” problems — those that involve rapid erratic behavior with seemingly unpredictable movements, including real-world issues like the stock market or climate change.

Today, non-mathematicians who happen to be familiar with fractals are more likely aware of their beauty. A fiddlehead fern, a gecko’s footpads, a flashy bolt of lightning — these are all reminiscent of fractal images. And while nature seems to provide an array of these beauties, humanity has added more to the mix through kaleidoscopes, architecture and, yes, even those wiggly math problems.

As the start of the 2016 International Math Olympiad draws near, three NSF program directors from the Division of Mathematical Science — Lora Billings, Edward Taylor and Frederi Viens — provide some facts on fractals.

What is a fractal?

Billings: The way we were describing it, these are pictures or objects. You’re trying to classify the object in some way in terms of how wiggly it is. There are the dimensions we’re all familiar with — zero dimension for a point, one dimension (north or south) for a line, two pi radians of a circle for 2D — but some objects just can’t be given meaningful integer dimensions, and fractions accommodate things that don’t fit.

Viens: If I wanted to construct a fractal, I would take a simple rule, like adding three small triangles on the edge of a big triangle like a Koch snowflake, which is used to understand fractal geometry. Then, the rule is repeated again and again. On the flip side, if you’re staring at a picture of a fractal, you could say, “Wow, that’s complex, how do I describe it?” This construction is a very simple way to do that. The notion that you are between numbers still brings you back to numbers in between whole numbers.

Where did fractals come from? And why were they created?

Taylor: Fractals are a very old topic that dates back to the early 20th century. One person, the French mathematician Gaston Julia, was important in the development of this. It came up out of this notion that you could build these very complex sets through an iterative process.

Billings: In my own work, I have created fractals related to how wind would move oceanographic sensors in an eddy (shown above). The two colors represent which of the two basins you would drift toward (left and right). Notice the complex structure in the layers of the two colors near the boundary. This is just a snapshot in time, but wind would push the sensors back and forth in a stochastic — a kind of organized randomness — way. So, near the boundary, it isn’t very clear to which basin the sensor will head. That’s why I like to say, “A picture is worth a thousand words.” The point was to come up with an optimal, minimalistic control for the sensors to use as little battery as possible and keep them on the left side with small chance of displacement. This is something you can recreate in experimental settings, like tanks in a lab.

Viens: We also have huge gyres in the ocean where plastic is collecting, and one might use this same sort of fractal modeling to better understand that problem.

How else are fractals used?

Taylor: People don’t realize when they look at it, but computer game graphics and their varied backgrounds are just copies of things over and over again. It’s a combination of linear algebra and fractals.

Billings: You can actually find patterns in some data that help to compress it, too. That way you can send data along very quickly. If you want to send a picture, and your picture is three gigabytes, you can find a simple way — a rule — to compress this data and then all of a sudden explode it again. If a picture has enough of this sort of fractal imagery in it, these algorithms work very well.

Viens: MP3 files that we have on our devices are about 10 times smaller than a CD’s digital files. On an LP, there’s essentially an infinite amount of information because it’s analog. But the MP3 is so compressed you can’t listen to classical music because a lot of the instruments get drowned out as a result of some loss of information.

What are some of the wiggliest problems fractals address, though?

Viens: In probability theory, one application for fractals is modeling financial markets, which are known for their wiggly behavior. The S&P 500 or Dow Jones Industrial Average over a day might have a few jumps, but if you look at it over a week or even a year, then you can see jagged ups and downs. That’s when you can use these models, which really have a fractal behavior. You can discern a sort of order in the random chaos these models have and that’s the stochasticity we already mentioned.

But we can’t predict what stocks will do each day this way, can we?

Viens: No, we can’t do that. However, financial markets’ self-similarity is actually very simple. The magnitude of how much your stock may move up and down is proportional to the square of the magnitude of how much time has elapsed. So if a stock tends to swing up and down by 20 percent in a year, it will tend to swing up or down by 10 percent in three months, twice as fast as one might expect without this fractal self-similarity. If the models and rules are simple enough — even if they are stochastic — you can absolutely make probabilistic predictions. So you can make a conclusion on the chance something is going to occur or not occur in the future. But it’s only ever a chance.

We see beautiful fractals in nature. Are there any constructed by non-mathematicians that are noteworthy as well?

Viens: One of the world’s most extraordinary buildings is the Sagrada Familia in Barcelona, designed by Antoni Gaudí. He studied how plants grow and noticed patterns and fractals — how a leaf connects to the stem and how much light it’s getting. He considered all this when he built this cathedral in a way to maximize light. Compared to this modernist Gothic cathedral, other 15th century Gothic cathedrals had nowhere as much light penetrating them. He maximized light by using geometry and included fractal structures — a stem that splits up and splits again. I believe this is one of the most beautiful human-made fractals.

For more beautiful fractal images, check out a new board on the NSF Pinterest page.