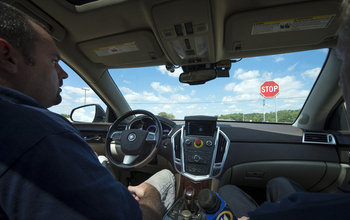 Up until now, technology has largely remained dependent on action by a user, often in a particular setting. But in the age of co-robots, devices are breaking free of that model, interacting with people other than their users, and with other pieces of technology. They’re also beginning to act in ways beyond what their users — or even their programmers — have determined. That creates the possibility of more adaptable and useful robots, but also raises new questions.

“Co-robots are robots that interact with humans in more complex, social ways,” said Patrick Lin, an associate professor of philosophy and the director of the Ethics + Emerging Sciences Group at California Polytechnic State University, San Luis Obispo. “They can work and move alongside us, not just on highways but in our neighborhoods and homes. As robots go out into the world, the moral and ethical challenges change.”

As robots become increasingly integrated into daily life and give people abilities that would have been considered “superpowers” not long ago, researcher Lin says now is the time for scientists, policymakers, industry representatives, and the public to start thinking through the ethical dilemmas they raise. Lin and his group are funded by the National Science Foundation (NSF) in support of the National Robotics Initiative.

“Once drones, cars, and other co-robots are living among us, these technological superpowers will challenge our basic values, such as privacy, due process, liberty and more.”

The role of an ethics researcher, Lin said, is not necessarily to answer all these questions, but to help society prepare for what’s next.

“It’s not so much to stop research as it is to guide responsible innovation, which seems better than a public backlash after a new technology is introduced. Ethics provides an important framework to tackle these challenges and make sure the co-robots work for us.”

As researchers continue to explore those issues, Lin described five categories of ethical considerations that could help guide the adoption of co-robots.

How should industry and society govern the development and testing of technology? When and how should regulators have input into technological design that affects the broader public?

With cutting-edge technology now present in everyday life, how can society make sure that developers can innovate while the public remains safe?

“As our world becomes increasingly connected, technology’s effects on us can also be more direct, physical and impactful than before,” Lin said. “This may create new obligations for developers as they test their technologies out in the real world.”

2. Morality and the robot

Nearly seven decades ago, Isaac Asimov was one of the first to consider robot morality when he laid out the Three Laws of Robotics in the novel, “I, Robot.”

Two: A robot must obey orders given it by human beings except where such orders would conflict with the First Law.

Three: A robot must protect its own existence as long as such protection does not interfere with the First or Second Law.

These laws seem reasonable, but real life leads to much more complicated situations. What if, for example, a self-driving car faces a crash situation where at least one person will be hurt no matter what it does?

“Risk trade-offs are everywhere in driving,” Lin said, “from the obvious life and death choices to everyday decisions that may increase risk to others, such as moving toward the edge of your lane to stay clear of a big truck.”

Researchers believe self-driving cars will reduce accidents and prove safer than those now on the road, but even autonomous machines won’t always be able to avoid causing injury. If a co-robot must make a choice that will kill someone, how does it decide whom to kill?

Another major ethical and legal question underlying this issue is whether the driver, the car company or the programmer who wrote the code far in advance in a distant location will be held liable.

A video Lin created for TED-Ed gives concrete and dramatic examples of how tricky these choices are.

3. A robot’s usefulness may lead to a loss of skills or interest

Imagine you could have a robot to help you around the house. It can help you tidy up. It can feed the dog, pet the cat, and water the plants. It can respond to human voices and can alert you if something is going wrong in your house. So far, this all sounds wonderful. But what if this robot is so good at its job, you feel comfortable leaving your children home alone with it? Or you trust your grandmother’s robotic caretaker so much you feel you don’t need to check on her quite so often?

“In Japan, the population is aging rapidly and many see service-robots as part of the solution, taking care of the elderly and babysitting children,” Lin said. “The robots themselves might not present the ethical challenge — it is how we are using them. Are we avoiding our basic human responsibility to care for the young and elderly? Are these machines capable of providing the emotional support that people need? Should they override the autonomy of a patient who does not want to take her pills?”

He added: “These are important questions that need to be asked ahead of time, not after damage has been done.”

From hearing aids to a brain-computer interface that can allow someone with locked-in syndrome to communicate, researchers have made great advancements in returning bodily functions to those who have lost them. Few dispute the ethics of technologies that would return the use of a hand to an Iraq War veteran or would keep a heart beating with a pacemaker.

But what about technology that could take the body beyond its current limitations? What if a robotic battlesuit could give a soldier super-strength or an implanted device could improve a pilot’s response time?

“There may be an ethical line between repairing a body and enhancing it, even though the line may be fuzzy at times,” Lin said. “By using technology to go beyond therapy, we need to be more sensitive to safety concerns, societal fairness, and other issues.”

As co-robots become normal parts of life, they will have far-reaching effects on society.

“Self-driving cars will be the first co-robots on a societal scale,” Lin said.

Some of the effects are predictable. For example, navigational systems connected to the internet will provide directions for self-driving cars. These systems might allow restaurants and other retailers to pay to have drivers routed by them. These same cars might send drivers around neighborhoods with high minority populations either because the algorithm deems these neighborhoods to be “unsafe” or just because it is picking up and amplifying the behaviors of other drivers.

Is the programming reinforcing stereotypes and societal biases, even hurting property values and business revenue? What about programming that routes cars through small neighborhoods on roads not built for such traffic — a scenario that already emerged thanks to current GPS technology?

“The cumulative effects of all these navigation decisions could be substantial and there will surely be winners and losers,” Lin said.

Researchers like Lin and others continue to explore ethical considerations in tandem with responsible robotics research to help mitigate such conflicts with NSF support.