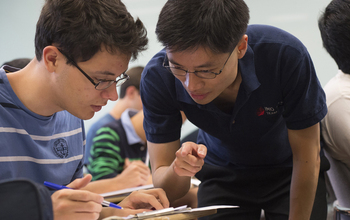 Po-Shen Loh loves math. He doesn’t say that outright, but he doesn’t have to, either.

His first brush with the Math Olympiads was in 1994, when he was a sixth grader. That year, the International Math Olympiad was held in his hometown of Madison, Wisconsin, and he read about it in the local paper. A team of six from the U.S. won, something that wouldn’t happen again until 2015 — by which time Loh was serving as its coach.

The International Math Olympiad started in 1959, with just seven countries participating. The U.S. did not participate until the ’70s. Today more than 100 countries participate annually. In the U.S., the Mathematical Association of America selects and trains students to represent the nation. This year a stellar team of six high school students were selected from approximately 150,000 who competed in local competitions from around the country.

According to Loh, however, the local competitions build an awareness beyond the competitors about not only the Math Olympiad but also for the love of math, and he estimates that reach to be as much as 20 million. “We really are canvassing the country for the best U.S. talent,” explained Loh, who is also on the mathematics faculty at Carnegie Mellon University.

Leading up to this year’s International Math Olympiad that officially begins July 10, Loh visited the National Science Foundation (NSF) to talk about this year’s competition and the need to continue to fuel students’ passions for learning. In 2010, Loh received an NSF award to support a Math Olympiad summer program. He currently has an NSF early-career research award to study extremal combinatorics.

“I like to live in a world where people do things because they are passionate about them. They do things not because they have to do it, but because nothing is going to stop them from doing it,” Loh said. “I’m the national coach, but I usually consider that being the national cheerleader. I do train students when they come to Carnegie Mellon University, but that’s only three weeks. More importantly, the rest of the year, we are trying to create awareness about the fact that this is a very interesting thing to do.”

Q. Last year was a big year for the U.S. team. How did you lead your team to victory?

A. The American win was powered by two strong American ideals: the first is freedom of information, and the second is the freedom to pursue happiness. The freedom of information part has to do with how over the past 10 years or so, the number of online resources has ballooned. Additionally, dedicated forums allow people to discuss Math Olympiad mathematics, interesting tricks, and interesting ways to think about math problems. There are also lots of written materials … it’s just an enormous amount of information. And there are camps springing up as well.

But this has to be paired with the freedom to pursue happiness. Team members are generally that kind of person who says, “I want to do this, and nothing is going to stop me.” And they can!

There are many coaches who teach raw skills. Usually by the time I meet with these students, they already have a lot of these skills, and they’ll even continue to build on those skills. My goal is to try and align their personal interests with mathematics, with doing amazing things and with the idea of leaving some impact on the world. My hope is that if you align that personal motivation with doing something really well and doing extraordinary things, then motivation will engage this big reservoir of resources so that becomes even stronger in a particular domain. I want students to love doing incredible things simply for the sake that they are incredible.

Q. Can we expect another win again this year?

A. It could be anything. Last year was really close; it came down to literally one problem. Each team member solves the problems, and then there is the sum total of their scores. And the difference between our score and China’s was one problem, so it was very, very close. I don’t know what is going to happen this year. I’m not the kind to put pressure on the students because I think that would be worse. But one nice thing is that the students now know it’s possible to win. So the chance of winning seems much higher than ever.

Q. If there was a passion-meter to gauge how “jazzed” this team is for a win this year, would they measure pretty well?

A. Yes, oh yes, YES. They are pretty jazzed. We have one team member who is returning for the third time. I should say that I do believe the U.S. team will only continue to do better and better simply because we do have this supply of online resources, and we’re building this culture of people who love mathematics.

Q. How has NSF funding played a role in this?

A. Previous coaches built a foundation, but with an NSF infrastructure grant we were able to build more resources, such as an evening seminar where postdocs and former students could talk about what they do now. This helped put a much more long-term spin on this program.

Q. What is the state of U.S. math education today, and what can we expect in the future?

A. I run an education technology startup company called expii.com. The entire purpose of that is to provide personalized learning through smartphones. We’ve already seen online resources made available, but the next step is to put algorithms on top that would help weave a path through this sea of resources to find what’s right for you. This is the future and solution we need.

That’s not to say it replaces schools. There’s always a place for human teachers. They are very important. However, if you have one teacher in a room with 30 students, that teacher cannot individualize — no matter how good she or he is. So, no matter what you do with curriculum, that fundamental problem is still there. That’s the problem technology is supposed to solve.

Boosting education requires two things. First, we must have a free system that is personalized and interactive, so that anyone who wanted to become amazing at something could. So that first piece should make it so anyone who wants to do well can. The second piece is to convince them that they want to do well. That’s a completely different problem. It’s about convincing them this is a fun, pretty useful thing to do. If you do both, you solve education.

Q. It seems like the Math Olympiad is actually just a smaller part of a bigger plan for you, yes?

A. Even though I’m the coach of the team, my focus is NOT on winning. I’m more interested in working with some of the country’s top talent to optimize their impact on the world in the next 20 to 30 years. That’s actually what I care about.

Math is … big, and students can actually use the same skills they’re developing right now. People will often say that the Math Olympiad is not real math. But the problem-solving skills, the tenacity and the ability to work on problems for hours are all skills they will use later.

I’m much more interested in the opportunity to work to maximize impact on the world. I want these superstars to go on with their lives after this and do something the world remembers.