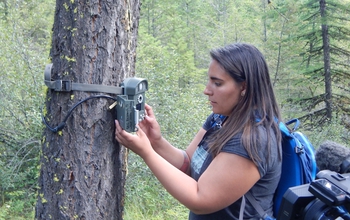 When is research about more than just the findings it produces?

What about when it connects with heritage, allowing people to learn about, purify and preserve the lands they hold dear? Or when it holds the promise of a new career and new possibilities? Or when it involves building up a community of scientists and engineers, so that the current generation of researchers can teach the next one?

That’s the type of research going on at tribal colleges and universities across the country, with support from the National Science Foundation (NSF) Tribal Colleges and Universities Program (TCUP). TCUP provides awards to institutions — including those serving Alaska Native and Native Hawaiian populations — that promote high-quality science, technology, engineering and mathematics (STEM) education.

For the tribes they primarily serve, the schools work to build cultures of science and engineering that could provide substantial economic, societal and environmental benefits. For students, the colleges provide access to science- and engineering-related vocations, from research careers, to work as STEM educators and laboratory techs, to nursing and wildlife conservation.

Earlier this month, NSF was able to take a peek at a small portion of the fieldwork in progress at two such schools in Montana: Salish Kootenai College, located on the Flathead Indian Reservation, and Aaniiih Nakoda College, located on the Fort Belknap Indian Reservation. We heard from students about the work they’re doing on mountains and streams, and about the unique educational opportunities provided by tribal colleges and universities.

At Salish Kootenai College, a group of undergraduate researchers, working with Janene Lichtenberg, head of the school’s Wildlife and Fisheries Department, trekked through steep wooded trails to check on cameras trained on one of the region’s iconic plants: huckleberries. Culturally significant to the Salish, Kootenai, Pend d’Oreille and other regional tribes, the wild plants serve as an important food source to deer, birds and other Montana fauna. Grizzly bears are enthusiastic consumers of the berries, as the college’s cameras can attest.

The team studies huckleberry phenology, or the ways the plants’ surroundings — including climate, habitat and surrounding flora — affect them. Using instruments that measure canopy cover and collecting data on pollination by bees and other insects, the team builds a more robust picture of the plants’ life cycles.

But the students’ thought process goes beyond the work at hand. The group accompanying Lichtenberg described tribal colleges and universities as places where they can find high-quality education designed specifically to reach them. Tribal schools can connect with tribal students in ways that other institutions can’t, they said. Critically, teachers and researchers of native descent can provide role models for students, showing that success is possible and illuminating paths to get there.

STEM education has an important part to play for tribal communities, the students said, and they can see themselves as parts of expanding educational communities.

“There just aren’t many native women in science right now,” said intern Celina Gray, whose work is supported by the NSF Research Experiences for Undergraduates. “I’d like to help change that.”

At Aaniiih Nakoda College, a research team ventured through Mission Canyon’s limestone walls, following a stream into the Little Rockies to monitor a decades-old environmental issue: water contamination. A now-defunct mine used techniques in its search for gold and silver that caused heavy metals to leach into the stream, which flows into the Fort Belknap reservation.

The stream is familiar ground for Daniel Kinsey, an instructor at the college. Two decades ago, he began work with environmental surveying teams to determine the extent of the leaching. Today, Kinsey brings out undergraduates to look for indications of the stream’s health.

“I studied these same streams approximately 20 years ago when I worked as a student intern for the Fort Belknap Tribal Environmental Protection Program,” Kinsey said. “I plan to collect aquatic macroinvertebrates today and compare the current data with data from 20 years ago. I want to see if there has been any change in the macroinvertebrate community in those 20 years.”

Stepping into rubber boots, the student intern team waded into the stream, carrying a sail-like net suspended by two poles. Kinsey held the net while the students used their feet to churn up the bottom of the stream, sending sediment flowing toward him. After flushing the net’s contents into specimen containers, the team found life crawling around inside, including larval flies. Those organisms, along with the algae, or diatoms, that the team scraped off nearby rocks, are signs of a healthy ecosystem, Kinsey said.

At a second site, the contrast couldn’t have been starker. Further upstream, the water contained enough heavy metals that one of them — iron — had stained the rocks reddish with oxidation. Fewer organisms inhabit the water at the site, Kinsey said, and the creatures and plants found there tend to be hardier when it comes to surviving in contaminated environments.

The work has direct implications for the reservation, but the students taking part said it effects them personally. Douglas Andersen, an Army veteran who’s also worked in construction, said he’s now considering his options for a research career — and that one of his biggest challenges is narrowing down to a single field of study. Another intern, Teeah Roberts, said the university affords her similar opportunities to explore a passion for science.

“I just love science,” she said. “Any kind of science.”