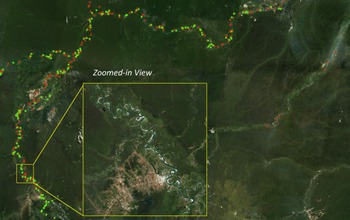 The year 2016 is on pace to be the hottest on record, with each of the first six months setting new temperature records, according to NASA. Climate change, combined with the effects of El Niño, is the main reason behind the record-setting temperatures.

Though the general trends and risks of a warming climate are well-known, researchers remain uncertain about the social and environmental impacts it will cause.

Because of this uncertainty, important questions relating to food security, water resources, biodiversity, and other socio-economic issues remain unresolved. How extreme will the weather changes be? How will these changes impact diverse ecosystems? Answering these and other critical questions requires new approaches that can help governments and individuals better respond to changing climate conditions.

In 2010, the National Science Foundation (NSF) awarded a $10 million Expeditions in Computing grant to a University of Minnesota-led research team that uses data-driven approaches to address key challenges in climate change science. Data-driven approaches have already proven useful in a number of scientific disciplines, from materials science to genomics.

The project, called Understanding Climate Change: A Data Driven Approach, developed methods that use climate and ecosystem data from a range of sources to refine predictions and identify changes in the climate. Those sources may include everything from satellite- and ground-based sensors, to climate model simulations and observational records for atmospheric, oceanic and terrestrial processes.

“These innovative approaches are helping to provide a new understanding of the complex nature of the Earth system and the mechanisms contributing to the adverse consequences of climate change,” said Vipin Kumar, professor of computer science at the University of Minnesota and lead researcher for the team. “These consequences may include the increased frequency of forest fires, precipitation regime shifts, and the propensity for extreme events — heat waves, droughts and floods, for example — that result in environmental disasters.”

The research team has applied its data-driven approaches to a variety of specific questions where scientific uncertainty has thus far limited the ability to understand changing conditions and to design proactive policies to address them.

In 2012, the team published a paper in Nature Climate Change describing the results of a data-driven study of rainfall in India. The paper identified a steady and significant increase in the geographical variability of extreme rainfall events within India over the past half-century, settling a controversy that had long caused gridlock in policy-making.

“Our current understanding of the geographical patterns of heavy rainfall and their changes over time guides water resources and flood hazards management as well as policy negotiations related to urbanization or emissions control,” the researchers wrote in the 2012 paper. “Thus, in vulnerable regions of the world where floods may claim many lives and water drives the economy, or in emerging nations which may contribute significantly to the atmospheric inventory of greenhouse gases, major science advances are needed.”

“The Nature Climate Change piece provides a hint of how sophisticated data-mining methods could help fill gaps in our understanding of climate change, and ultimately produce actionable insights that minimize the negative effects of climate change on humans and the environment,” he said.

For another study using those methods, the researchers built a system to monitor the dynamics of global surface water bodies using data from NASA’s Earth observation satellites. The system was able to identify a range of hydrological changes, from the meanderings of rivers to the reduction and growth of water bodies due to droughts, melting glaciers, and dam construction. (The public can visualize the changes occurring in water bodies worldwide using a web viewer.)

In one example of the power of the monitoring tool, the researchers identified 10 times more dams than what an international team of scientists had recorded over a period of 15 years in the manually curated Global Reservoir and Dam Database.

“This shows the scale of the knowledge gap in existing water monitoring products and the promise in using remote-sensing data for the global monitoring of surface water dynamics,” Kumar said.

In a third data-driven climate study, described in a 2015 Nature paper, the team compared 22 state-of-the-art climate models from research groups all over the globe. The team was looking for consensus among the models in predicting the impact of climate change on coastal upwelling in the ocean — the process by which deep, cold, nutrient-rich waters rise toward the surface.

The models they analyzed consistently predicted more upwelling along the coasts, a phenomenon that would ultimately influence the geographical distribution of marine biodiversity, and impact fisheries and other aspects of ocean health.

Other studies by the group have:

At the June 2016 ACM SIGIR Conference on Research and Development in Information Retrieval, Kumar gave a keynote speech on how the machine learning and data mining advances his team had made in understanding climate change impacts may be relevant to entirely different domains of information retrieval.

“This is a bold, ambitious project with a compelling and comprehensive vision,” said Sylvia Spengler, program director in NSF’s Division of Information and Intelligent Systems. “Potentially transformative, it has provided a unique opportunity to advance the understanding of climate and extreme events through a range of new computational approaches.”