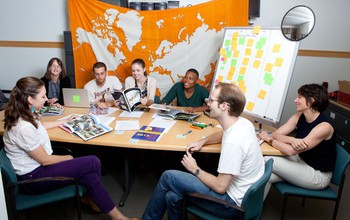 Betsy Levy Paluck has always been interested in how societies find ways to reject violence and prejudice. That curiosity led her to Princeton University, where she works as a researcher, and then to the halls of New Jersey’s middle schools, to see whether social psychological theory could help students stamp out bullying and other forms of conflict.

To make that happen, her research team relied on an unusual set of partners: students, including those identified by their classmates as trendsetters, team leaders and peer role models — known in scientific terms as “social referents.”

Paluck said she started with a well-established concept in social psychology theory, which says people’s perception of normative or accepted behavior can actually influence their decisions more than their own opinions. But, she said, experiments that field-test such theories are still fairly rare.

“We really don’t know that much about what works,” Paluck said. “Even some of the most well-established theories in psychology about contact between antagonistic groups hadn’t really been tested in the field with experimental methods.”

Social psychology theory and laboratory research show that individuals learn what’s desirable in communities by observing other people’s behavior and seeing what behaviors are rewarded or punished. Social referents, Paluck said, can play a significant role in shaping what is considered acceptable behavior. The research team wondered whether they could set up anti-conflict interventions, and determine whether having social referents convey the messages from those interventions would make them more effective. And to do that, they would need to figure out how to identify the referents.

“Who are these social referents?” she said. “Can we find them? And if we can change their behavior regarding conflict, will that then change everybody else’s perception of what’s normative?”

Paluck and her partners worked with 56 schools across New Jersey in the 2012-2013 school year. For their experiment, they set up intervention programs at half of them, to test their effectiveness against a control group. (The other half were offered free training to run the program at the end of the school year). The project had the advantage of fortuitous timing — New Jersey had recently passed legislation requiring principals to institute anti-bullying programs, making schools eager to find allies with potential solutions.

The research team invited students, including social referents, to deliver the anti-conflict intervention to their peers. To identify referents from across school groups, not just the most popular students, the researchers asked students to nominate who they chose to spend time with over the previous two weeks, either face-to-face or online.

“You’re using social network analysis to assemble this ‘Breakfast Club’ of students from around each school,” an assemblage that represented the schools’ entire ecosystems, Paluck said.

When interacting with the students delivering the intervention, the researchers adopted a model of empowerment, not instruction. Instead of relying on school assemblies or lectures, they acted as “campaign managers,” Paluck said, taking the referents through exercises to help them prepare to react to student conflicts and showing them ways to spread anti-conflict messages through posters, wristbands, social media and other methods. The team provided the student referents with templates designed to stand out, but let those students control the messaging.

“We treated students as politicians, campaigning for a better school,” she said. “The theory was that their public behaviors and statements would change norms.”

And they did, especially when the students delivering the messages were social referents. According to the researchers’ findings, which were published in the Proceedings of the National Academy of Sciences (PNAS), students exposed to the social referents reported disapproval of conflict in higher numbers than those who weren’t exposed. They were also more likely to report that a friend discussed how to reduce conflict with them.

The team also collected records from each school at the end of the year to see how many students were disciplined for conflicts with their peers. When the researchers contrasted the schools that received the interventions to those that didn’t, they found that the schools in the former category had lower rates of discipline records, and students reported higher levels of talking with friends about how to avoid conflict.

“We were able to see that in randomly-assigned schools where we ran the program, there was an average reduction of 30 percent in actions related to peer conflict, specifically,” Paluck said.

And the schools where the team worked with more social referents saw the biggest decreases in conflict. “It was really the social referents who were changing norms and the whole school climate in terms of conflict,” Paluck said.

Paluck noted that her team’s findings are still at an early stage regarding the effectiveness of the kinds of intervention tactics her team tried. But, she said, the findings hold great promise. An open question for the researchers, and the schools, is what happens next in the students’ communities.

The training and “campaign management” staged by the researchers in the schools were labor-intensive, as were the data collection and analysis to evaluate the interventions. Without constantly renewing those efforts, Paluck said she didn’t know how long anti-bullying sentiment within the schools would last.

“If you don’t do anything more on conflict, I could see the norms reverting back,” she said. “Exactly how long do they last? We don’t know.”

The influx of new students arriving at schools every year could result in bullying and other types of conflict shifting back to accepted behavior.

“Norms and cultures are not static,” Paluck said.

That’s both good news and bad news for anti-bullying efforts. The fact that accepted behaviors can change means bullying could come back. But, Paluck noted, it’s also exactly why the research team was able to make anti-bullying one of the norms in the first place — and why students can make a difference.

#1322356 Social networks and climates of conflict