Roses are red. Violets are blue. What gives flowers those eye-catching hues? 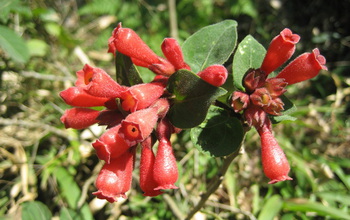 To find answers, scientists delve into the world of plant genetics

To solve the mystery of why roses are red and violets are blue, scientists are peering into the genes of plant petals.

“When you ask anyone how one flower is different from another, for most of us, color is the feature that first comes to mind,” says evolutionary biologist Stacey Smith of the University of Colorado Boulder.

Most people don’t think about why a flower is a particular color, but it’s an important question for biologists, says Prosanta Chakrabarty, a program director in the National Science Foundation’s (NSF) Division of Environmental Biology, which funds Smith’s research.

Smith and her team are “looking at the genetics of flower colors, and at changes in those colors over time,” Chakrabarty says.

It all comes down to biochemistry

In nature, flowers come in hues that span the rainbow.

“On a microscopic level, the colors come from the biochemical composition of petal cells,” Smith says.

Pigments are the main chemicals responsible. Plants contain thousands of pigment compounds, all of which belong to three major groups: flavonoids, carotenoids and betalains. Most flower colors come from flavonoids and carotenoids.

“In addition to giving flowers their colors, carotenoids and anthocyanins — which are flavonoids — have antioxidant and other medicinal properties, including anti-cancer, antibacterial, antifungal and anti-inflammatory activity,” says Simon Malcomber, a program director in NSF’s Division of Environmental Biology.

Malcomber says the research could show how plants evolved to synthesize the carotenoids and anthocyanins that produce red flowers. “The results could be used in future drug discovery research,” he says.

Much of Smith’s work is focused on understanding how changes in flavonoid and carotenoid biochemistry relate to differences in flower colors. She and colleagues conduct research on the tomato family, a group of about 2,800 species that includes tomatoes, eggplants, chili peppers, tobacco and potatoes.

“These domesticated species don’t have a terribly wide range of flower colors and patterns, but their wild relatives often do,” Smith says. “So we study wild, or undomesticated, species, which are most diverse in South America.”

Smith has had her share of adventures in the field — like the time she tried to find a plant with red flowers that lives at the base of a volcanic crater in Ecuador.

“It was my very first field trip, and I wasn’t super-savvy,” Smith says. “I took a bus to the outside of the crater, dragged my suitcase up to the rim then down into the crater, assuming there would be a village and a way to get out. There was neither. Thankfully, there was a park station nearby where I was able to stay overnight. I found the species in full flower in the forest the next day.”

Smith is currently in hot pursuit of an answer to the question: When did red flowers first appear in the tomato family? “We thought that red flowers might have evolved many times independently of each other because red-flowered species are scattered among many branches of this family tree,” she says.

Just 34 species in the entire tomato family, however, have red flowers.

“With such a small number, we can take samples of every one of these species to find out whether it represents an independent origin, and to determine the biochemistry of how it makes red flowers,” Smith says.

She and other biologists traveled from Brazil to Colombia to Mexico to track down red flowers and measure their pigments. “We found surprising patterns,” Smith says, “including that nearly every red-flowered species represents a new origin of the color, so red flowers have evolved at least 30 different times.”

While the researchers expected that flowers would be red due to the presence of red pigments, they found that plants often combine yellow-orange carotenoids with purple anthocyanins to produce red flowers.

“Our studies are now aimed at tracing the entire genetic pathway by which plants make flower colors and identifying genetic changes to see if there are common mechanisms,” Smith says.

The scientists want to know, for example, what changes have taken place since flowers first became red.

Answers in a petunia

Petunias and their colorful relatives are good choices for this research, according to Smith.

“Most of us have seen the tremendous variation in petunia colors at our local nurseries, and indeed, petunias have served as models for studying flower color and biochemistry for decades.”

Few people, though, are aware of the variation in petunias’ wild relatives, most of which are found in Argentina and Brazil. “We’re harnessing this natural diversity, as well as genetic information already available from ornamental petunias, to reconstruct the evolutionary history of flower colors,” says Smith.

“If earlier studies taught us anything,” she adds, “we shouldn’t expect flowers to play by the rules.”

Will roses always be red, and violets blue?

#1553114 CAREER: Testing The Predictability of Flower Color Evolution at a Phylogenetic Scale in the Petunieae Clade (Solanaceae)
#1413855 Evolution and diversification of red flowers: Testing the macroevolutionary causes of rarity
#1355518 Mechanisms of convergent flower color evolution above and below the species level