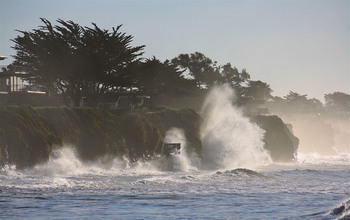 Last winter’s El Niño may have felt weak to residents of Southern California, but it was one of the most powerful weather events of the last 145 years, scientists say.

A new study conducted by scientists at the University of California Santa Barbara (UCSB) and colleagues at several other institutions found that during the 2015-2016 El Niño, winter beach erosion on the Pacific coast was 76 percent above normal. Most beaches in California were eroded beyond historical extremes, the study found.

The results appear this week in the journal Nature Communications.

“Infrequent and extreme events can be extremely damaging to coastal marine habitats and communities,” said David Garrison, a program director in the National Science Foundation’s Division of Ocean Sciences, which funded the research. “While this paper stresses the effect of waves and sediment transport on beach structure, organisms living on and in the sediment will also be profoundly affected.”

Added David Hubbard, a UCSB marine ecologist and paper co-author: “This study illustrates the value of broad regional collaboration using long-term data for understanding coastal ecosystem responses to environmental change. We really need this scale of data on coastal processes to understand what’s going on with the ecology of the coast.”

While winter beach erosion — the removal and loss of sand from the beach — is a normal seasonal process, during El Niño events the extent of erosion can be more severe.

The research team assessed seasonal beach behavior for 29 beaches along more than 1,200 miles of the Pacific coast. They made 3-D surface maps and cross-shore profiles using aerial LIDAR (Light Detection and Ranging), GPS topographic surveys and direct measurements of sand quantities. They then combined that information with wave and water-level data from each beach between 1997 and 2016.

“Wave conditions and coastal response were unprecedented for many locations during the winter of 2015-16,” said Patrick Barnard, lead author of the paper and a geologist with the U.S. Geological Survey. “The winter wave energy equaled or exceeded measured historical maximums along the West Coast, corresponding to extreme beach erosion across the region.”

However, that most recent El Niño was largely considered a dud from a water resources perspective due to unusually low rainfall, particularly in Southern California, which received 70 percent less rain than during the last two big El Niño events.

“The waves that attacked our coast, generated from storms across the North Pacific, were exceptional and among the largest ever recorded,” Hubbard said. “But the lack of rainfall means that coastal rivers produced very little sand to fill in what was lost from the beaches, so recovery has been slow.”

Rivers are the primary suppliers of sand to California beaches, despite long-term water reductions in the 20th century due to extensive dam construction. California’s extreme drought resulted in lower river flows, which in turn equated to less sand being carried to the coast to help sustain beaches.

While most beaches in the survey eroded beyond historical extremes, some fared better than others. The condition of the beach before the winter of 2015 strongly influenced the severity of the erosion and the ability to recover afterward through natural replenishment processes.

Mild wave activity in the Pacific Northwest as well as artificial augmentation of beaches (adding sand) in Southern California prior to the winter of 2015-2016 prevented some areas from eroding beyond historical extremes.

“We need to understand these challenges, which include rising sea level and the fact that most of the problems occur during these peak El Niño events,” Hubbard said. “Then we need to restore and manage our coasts in ways that will enable us to deal with these events and conserve beach ecosystems.”

The U.S. Army Corps of Engineers, the California Department of Parks and Recreation, the Division of Boating and Waterways, the U.S. Geological Survey and the Northwest Association of Networked Ocean Observing Systems also funded the research.