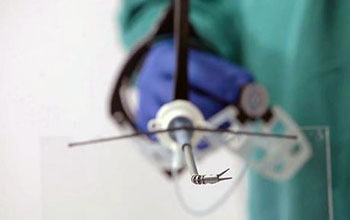 Surgeons can now use a new type of mechanical instrument to perform complex, minimally invasive procedures, also known as laparoscopic surgery, thanks to researchers and small business entrepreneurs funded by the National Science Foundation (NSF). The technology could lead to less trauma for patients and shorter recovery times after surgery.

According to its creators, the handheld instrument provides the same sorts of benefits as robot-assisted surgery, such as greater precision and functionality, but at a lower cost compared to existing robotic surgical systems. That lower cost could result in new capabilities for rural hospitals and other medical centers that can’t afford more expensive systems. The technology is based on NSF-funded engineering research and is being commercialized by FlexDex Surgical, which has received seed money from NSF’s Small Business Innovation Research (SBIR) program. (Watch the instrument in action.)

The technology gives surgeons a higher degree of dexterity and intuitive control than traditional laparoscopic instruments, according to Shorya Awtar, a University of Michigan (U-M) engineering professor who co-founded FlexDex with his U-M colleague and surgery professor, James Geiger, and entrepreneur Greg Bowles. Traditional laparoscopic instruments typically require significant training for surgeons and can be difficult and tiresome to use, leading to longer surgeries and increased healthcare costs.

In 2007, Awtar and Geiger began a crucial step toward finding a solution: fundamental research in engineering.

“Dozens of companies have tried this and they have failed, because their solutions were not based in scientific discovery,” Geiger said.

Supported by an NSF early career development award, Awtar looked at how different components in a mechanical system move in relation to one another, and how multiple chains of motion influence the performance of a system overall. This field, known as parallel kinematics, could address a number of mechanical engineering challenges, from minimally invasive surgery and micro-devices to manufacturing and metrology machines.

Awtar and his team gained further insight into the design of these types of systems through additional NSF research awards. Inspired by nature, they incorporated jointless structures that enable simplicity in design while providing smooth and precise motion.

The researchers then set out to create an instrument that feels and operates like an extension of a person’s own body.

Awtar created an abstract representation, known as a constraint map, of a person’s arm movement — from the shoulder to the elbow to the forearm to the wrist to the fingers — with each joint represented. He then mapped the motions of each joint and extended them beyond the hand to the motions of corresponding joints in the instrument, eventually developing a streamlined mechanical instrument with precision pinchers.

In 2013, Awtar and Geiger participated in the University of Michigan Innovation Corps (I-Corps) program, an NSF program that immerses scientists and engineers in entrepreneurial training that teaches them to look beyond the lab and consider the commercial potential or broader impact of their research. I-Corps participants interview prospective customers and identify market needs for federally funded innovations. From the program, Awtar and his team determined that medical facilities that could not afford expensive robotic systems needed access to less expensive, simpler instruments.

The following year, Bowles and serial entrepreneur Tom Davison, both of whom have experience in the medical device industry, joined Awter’s team to launch FlexDex Surgical, which received two NSF SBIR awards to develop its first product — a needle-like instrument for laparoscopic sewing.

“At the NSF SBIR program, we support early-stage engineering solutions to address old and expensive healthcare problems,” said Jesus Soriano, NSF program director for the SBIR Smart Health and Biomedical Technologies program. “NSF enables basic research in science and engineering, and also the commercialization of many of these fundamental discoveries into useful products and services. It is an effective use of taxpayer dollars.”

Surgeons in Michigan began using the new instrument in January, according to the team. Since then, the company has shipped the product nationwide.

“We have been an NSF-funded discovery and innovation from beginning to end,” Awtar said. “This technology demonstrates that basic research is needed to create breakthroughs.”